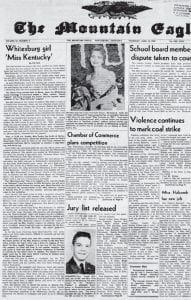 The front page of the June 18, 1959 edition of The Mountain Eagle carried the news of Whitesburg beauty Carol Fairchild Brown’s winning of the Miss Kentucky Pageant that was held then in Lexington.

A 25-year-old Camp Branch man has died of injuries he suffered in a mining accident in Floyd County about three years ago. Martin Wright leaves a widow and several small children. He was a candidate for the nomination for justice of the peace in the Colson area.

Noting the close races in the coming primary election for county offices, The Mountain Eagle carries the following item on its front page this week: “A gentleman came into our office an wanted to dictate a hot article against one of his opponents, but said, ‘Now don’t you put my name to it.”’

Letcher County’s rural schools are scheduled to open for the new year in three weeks.

Pickets forced a halt to a street-widening project in Jenkins this week. The Allen- Codell Construction Company of Winchester was forced to move their equipment out of Jenkins Tuesday after members of the United Construction Workers Union local at Wheelwright put up the picket line in downtown Jenkins. The Wheelwright pickets also stopped work on a new building in downtown Jenkins that will house a new movie theater and the offices of Consolidation Coal Company. Workers at Consol’s mines in and around Jenkins are currently on a one-week work stoppage ordered by United Mine Workers President John L. Lewis. The Construction Workers Union is an affiliate of the UMWA. The work stoppage affected about 70 construction workers.

Ercel “Star” Frazier is the new owner of Polly Hardware and Furniture, which has been located in Mr. Frazier’s building on Main Street in Whitesburg since 1943.

Mr. and Mrs. Elihu Cook of Kona were happy this week after receiving a check for $1,060 from the United Mine Workers of America. The check represents the monthly pension check due the 79-year-old Mr. Cook, dating back to his March 29, 1948 retirement from Elkhorn Coal Company’s Kona mine. Cook and his wife are the parents of seven sons, all of them miners at Kona. They also have 23 grandchildren, including two of whom are thoroughbred horseracing jockeys, L.C. Cook and W.M. Cook. Mr. Cook, who began his mining career at age 44, will receive a monthly UMW pension of $100 going forward.

The City of Whitesburg’s fire siren will be tested every night at 9.

A 20-year-old Whitaker man was arrested Saturday in connection with last week’s burglary of the Cromona Post Office. Vernon Bates Kiser was arrested after his wife cashed two stolen government checks totaling about $150 in the Pound, Virginia area.

Funeral services for Corporal Orell Amburgey, 18, were held at Roxana recently at the home of his parents, Mr. and Mrs. Manuel Amburgey. He died May 15 in Texas of injuries he suffered in a motor scooter accident.

Carol Fairchild Brown, 19, of Whitesburg, was crowned “Miss Kentucky of 1959” in Lexington Saturday night. Mementos of her trip to Lexington for the Miss Kentucky Pageant are on display at Dawahare’s in Whitesburg.

Violence continued this week in the coal mine strike, with most of the trouble centered around Marlowe, where a gasoline filling station and a power substation owned by Elkhorn-Jellico Coal Company were destroyed. Residents of the Marlowe- Belcraft area reported that hundreds of shots were being fired in the area almost daily. There were no casualties.

The Whitesburg Chamber of Commerce announced this week it will name a “Man of the Year” for Whitesburg annually.

An editorial in The Mountain Eagle questions who will benefit from Beth- Elkhorn Coal’s decision to begin a major auger-mining operation near Jenkins. Letcher County officials see the move as a “beginning of the end” for the coal company’s operations in the county. Those who will not benefit, says the editorial, are the miners, the landowners, and the county. Those who will benefit are the UMW Welfare and Retirement Fund and Beth-Elkhorn, which is a subsidiary of Bethlehem Steel, which made $161 million in profits last year.

Letcher County’s newly developed recreational area at Fishpond Lake has already run into trouble from vandals and irresponsible citizens, and a group of Neon Jaycees has temporarily taken on the job of cleaning up the lake. Visitors to the lake have paid little attention to existing refuse barrels and have littered the area with beer cans, pop bottles, sandwich wrappers and assorted other junk. The changing rooms have been used as outhouses, and one of the fiberglass floats has been slashed with a knife.

Staff Sergeant Robert Lucas has been awarded the Army’s Bronze Star Medal for his services in Vietnam. The son of Jasper Lucas of Whitesburg and Viola Stravaty of Detroit, Mich., he saw combat in Vietnam from June, 1967 to June, 1968.

A sluggish national coal market hit home with Letcher County miners as 99 South East Coal employees were taken off the job. The layoff includes all workers hired in the 18-month period since January 1978. South East’s 800 employees have been on three-day workweeks for almost three months. Meanwhile, Blue Diamond Coal Co. employees say work has been cut back to three- and four-day weeks at the Jim Polly Mines in Leatherwood and Scotia Coal Co. at Ovenfork.

The Letcher County Board of Education is expected to hire a Superintendent of Schools, replacing Kendall Boggs who resigned last month, at its meeting next Tuesday. Those applying to be superintendent are Beckham Caudill of Carcassonne, Billy K. Banks of UZ, Goebel Ritter of Whitesburg, and Jack Burkich of Whitesburg.

“The Big Fix” starring Richard Dreyfauss will be shown at the Alene Theatre in Whitesburg this weekend.

Drug trade, “chop shops”, and fraud have prompted the FBI’s Louisville office to station 80 percent of its field agents in the eastern half of Kentucky. Some of those agents are apparently still investigating the vehicle theft ring discovered near McRoberts in October 1987. FBI officials say the problem with the highest visibility is drugs, particularly marijuana.

Mary Franklin Hall, believed to be the oldest resident of Letcher County, died June 5. She would have been 105 on July 23. Mrs. Hall was the widow of Alvin Hall. She operated a grocery store and was a deacon of the Primitive Baptist Church.

Income from Kentucky’s forest products could jump from the $773 million currently being realized to about $3 billion per year if the right industries were attached to the state, experts say. Charles Derrickson, who helped conduct a study on the issue, said the key to increasing the value of Kentucky’s timber resources is locating facilities in the state that could produce finished products from raw materials.

The Letcher County AAU All-Stars will participate this week in the 15-andunder age group of the Kentucky Amateur Athletic Union tournament in Frankfort. Letcher County meets Franklin County at 1 p.m. on Wednesday and comes back at 5:30 p.m. to face Trinity.

United Cable Systems will begin offering digital cable to subscribers in July. The company, based in Hindman, provides cable television service to most of northern and western Letcher County. The basic digital package will cost an extra $13.90 a month for 16 additional video channels plus Pay for View.

Volunteers were knocking on doors last week to complete surveys to prove income levels at Jeremiah and Isom are low enough for the areas to qualify for federal grants for a proposed water line extension. Before the water and sewer district can get money to build the line, it has to prove that at least 51 percent of residents in the area to be served are low-income by federal standards.

The great-grandchildren of James Caudill, 1753-1838, a soldier during the Revolutionary

War, attended the dedication of his grave marker and a memorial service at the Whitaker Cemetery at Blackey. The Letcher County Historical and Genealogical Society has provided markers for Revolutionary War soldiers buried in Letcher County.

Letcher County native Phillip Craft is now the state of Kentucky’s official beekeeper. Craft has seven hives of his own at his home in Wilmore. He became interested in beekeeping through his grandfathers, who both kept bees.

The Fleming-Neon City Council has agreed to move forward with plans to connect trails around the city with an allterrain vehicle trail system proposed by Letcher County. Council members visited Evarts to see how the Harlan County ATV trail has impacted the town. The council decided at its June meeting to give the Evarts trail ordinance to City Attorney Jimmy Craft to modify it to suit the needs of Fleming-Neon.

Biologists with the Kentucky Department of Fish and Wildlife Resources were forced to euthanize a 480-pound black bear last week after it began to lose its natural fear of people. The decision was made after the bear allowed a woman and small child to approach within four feet of it at Kingdom Come State Park at the Letcher- Harlan County line. It was the third bear euthanized in Kentucky by department biologists in less than two months.

Bishop Willie Lamb Sr. marked his 85th birthday and was the guest of honor at a celebration that drew 130 guests.