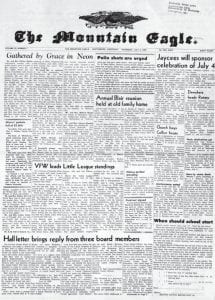 This image shows the front page of the July 2, 1959 edition of The Mountain Eagle.

Six steam shovels are now in place and working on the new state highway between Eolia and the Letcher-Harlan county line. With the weather now cooperating, more than half of the road project is completed. Grade work is expected to be finished by fall.

One of the largest gas wells to be struck in eastern Kentucky is now spewing natural gas in Harlan County. It is the second well discovered there. The product will be piped to Louisville and other cities.

J.G. Gault has bought the Ford dealership in Whitesburg from the Fairchild brothers.

It is said there are more taxi drivers in Whitesburg than in any other town of its size in Kentucky.

Israel W. Davis, who for years was in charge of the Consolidation Coal Company barn at Jenkins, has died after being severely injured at work.

Letcher County Sheriff Morgan T. Reynolds reports that only 149 licenses have been purchased by dog owners in Letcher County even though there are more than 2,700 dogs in the county. The sheriff says that if dog owners don’t come forward and buy their 2019 licenses for their pets, state officials are threatening to have them indicted before a grand jury. “I’m sure you would rather pay $1 now than be indicted and have to pay a fine and costs,” Sheriff Reynolds says in a public notice advertisement.

Plans are being made final for large Fourth of July celebrations set for Whitesburg and Neon. Proceeds from the Neon celebration, which will feature activities sponsored by the McClellan-Anderson American Legion Post 104 and the United Mine Workers, will help pay for a new fire truck for the Neon Volunteer Fire Department. The Whitesburg celebration, which will start off with a parade and end with fireworks, is being organized by the American Legion Douglas Day Post 152.

Willard Kincer has been elected president of the Neon Lions Club. Jack Craft was elected as first vice president and Tom Curry is the new second vice president.

South-East Coal Company mined 29,630 tons of coal during the month of May without a lost-time injury. For the same month, the Elk Horn Coal Corporation mined 122,409 tons without an injury accident, the Big Sandy Mining Institute reports.

A Gilley man has died by accidental drowning. Buell Metcalf died in a manmade lake on the south side of Pine Mountain near Dionne on Sunday, June 26. He was 30.

An outbreak of polio in neighboring Virginia has Letcher County health offi- cials warning residents here to take the series of three polio shots or a booster for those who were vaccinated earlier. While no new cases of polio have been reported this year in Letcher County, Dr. R. Dow Collins, the county’s public health officer, said the threat of the disease spreading from Virginia is very serious.

Two-dollar bills were plentiful in Letcher County this week. The Bank of Whitesburg, which ordinarily keeps very few of the bills on hand, had about $7,000 worth Monday. Then Bank of Neon also had an unusually large number of $2 bills this week, but did not have a definite number. The bills came from Blue Diamond Coal Company, which paid its employees their wages and vacation in them last week. Reportedly, the company paid some $217,000 in $2 bills, for which it had to send all the way to the Federal Reserve Bank in Cleveland. A coal association official said the $2 bills were used to show the value of rail mines to counties in eastern Kentucky.

The Letcher County Board of Education said today it objects to Mrs. Nora B. Hall’s serving as the district’s School Lunch Director, but would not object to her teaching in the county school system. Mrs. Hall, wife of Letcher Schools Superintendent W.B. Hall, is at the center of controversy between Hall and school board members. The issue is expected to come to head at the board’s July 11 meeting. Hall recently mailed letters to a selected list of county residents, asking them to join him in his fight against the board.

Ronnie Cain, husband of the former Phyllis Ann Hall of Whitesburg, made a perfect 4.0 standing last semester at the University of Kentucky, where he is a member of the football team.

A new contract between the Wardrup Packing Company at Blackey and its union workers was signed this week.

The congregation of the Graham Memorial Presbyterian Church in Whitesburg this week purchased the home of Mrs. T.R. Collier for use as a manse. The purchase price for the home, located in downtown Whitesburg behind the post office, was $27,500.

The Cumberland Gap National Historic Park at Middlesboro, eastern Kentucky’s first national park, will be dedicated this Friday and Saturday. Vice President Richard M. Nixon will be the guest of honor on Friday.

A number of Whitesburg families received certified letters from the Kentucky Department of Highways this week, which they assumed meant that their homes would be acquired to make way for construction of the bypass around Whitesburg. The letters were a mistake, however. They should have gone to the owners of 127 parcels of land along the route of US 119 and US 23 from Pine Mountain Junction to Payne Gap. Someone in the Pikeville district office of the highway department picked up the wrong mailing list, the department explained.

The Sharon Heights hospital property in Jenkins will become a home for the elderly if efforts currently underway are successful. A non-profit corporation has been formed to secure the property, remodel it, and operate it as a home for the aged.

Jenkins has received $980,000 in federal funds to purchase and improve the water system which serves the county. The funds, including a grant of $658,000 and a loan of $282,000, came from the Economic Development Administration.

A layoff of 20 to 25 Lake Coal Co. employees goes into effect Monday, according to a company official, who blames the layoff on “a lack of coal sales.” The layoff is expected to last at least 60 days, he said, but may stretch out as far as 90 days or more.

After a year of four bidlettings on the Whitesburg bypass, a $17.7 million contract has been awarded to Melco Construction and Warren Greer, both of London. Beginning of construction on the 2.3-mile highway will have to wait, however, until settlement of two condemnation suits for a waste disposal site.

Landon Whitaker of Whitesburg will be included in the cast of a film about former Harlan County Sheriff Bill G. Williams. Filming of the twohour television documentary was set to begin last Monday. Whitaker was state auditor when Williams was sheriff. Whitaker, who audited Williams’s books and found them without error, will play himself in the film.

The State Department of Education wants the Letcher County school system to close Fleming-Neon and Letcher high schools and three elementary schools and to make other major overhauls to the system. If approved, the state’s school facilities survey would force the local board of education to close the two high schools, replacing Letcher with a new school in the Isom area.

Defense attorneys will wait until August before deciding whether to appeal the case of seven Letcher County men convicted last week of operating a “chop shop” at McRoberts. A federal jury in Pikeville deliberated for 5½ hours Friday before returning with the guilty verdict. Vernon Andrew Mullins, Charles Edward Tackett, Timothy Neal Howard, Jeffery Neal Howard, Michael S. Mullins, David A. Fleming and Russell Dean Hall all were convicted on all 38 counts contained in a Feb. 23, 1989 indictment returned by a federal grand jury in Ashland.

Consultants hired to plan development for Jenkins have recommended that the city focus on ecotourism, building a welcome center near Pound Gap and creating a compact downtown reserved for commercial enterprises, space for entrepreneurs and a college of natural sciences. Industrial development would be reserved to a site on the outskirts of town that the city is in the process of preparing.

Fleming-Neon is among 29 Kentucky water districts that have issued conserve water advisories to their customers. The state Division of Water reported that water systems in 18 counties are having trouble keeping up with the demand because of the dry weather.

Coyotes are “spreading through the state,” said Mark Cramer, of the Kentucky Department of Fish and Wildlife Resources. William Wright of Whitesburg was surprised when he was calling turkey at Thornton and called in a coyote instead. Some people have been trapping the animals on Black Mountain, a few have been seen dead on the highways, and others have been spotted roaming old strip mines.

Dicy Halcomb will celebrate her 100th birthday at her home at Linefork on Saturday, July 3. The celebration is open to all family, friends and neighbors.

Waters from creeks leading to the North Fork of the Kentucky River overflowed into downtown Neon after several days of heavy rains caused flashflooding last week. Forecasters said Letcher County would continue to get a respite from the rain until Thursday.

The Letcher County Board of Education this week voted to renew the contract of Supt. Anna Craft for another four-year term.

A water dam specialist with the state Division of Water is scheduled to inspect an old silt pond on Company Branch at Craft’s Colly this week after county officials declared a state of emergency over fears the dam might collapse. An overflow culvert located near the center of the dam, estimated to hold six million gallons of water, stopped up on June 19 and caused water to erode the dam.

Craig Anthony Greer earned his commercial pilot’s license in February from Regional Airline Academy in Deland, Fla. He is the son of Darryl and Lana Greer of Jeremiah and a 2007 graduate of Alice Lloyd College.