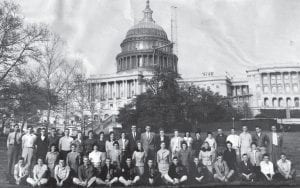 SENIOR CLASS JOURNEY — Fleming-Neon High School Class of 1960 member Robert “Bobby” Pike (seated on front row, far left) furnished this photo taken in front of the U.S. Capitol Building during the class’s senior trip to Washington, D.C., and New York City. Pike, who now lives in Hindman, says he remembers Washington more fondly than New York City, which he found to be overcrowded. Pike is a former employee of the old Coca-Cola Bottling Company of Whitesburg, which is now home to the Whitesburg campus of Southeast Kentucky Community and Technical College (SKCTC).

A small debt is said to be the reason behind a fatal shooting at Kona on Tuesday evening. Brent Niece, 38, is accused of using a shotgun to kill R.M. Gent, also known as Noble, about 21. Niece is a son of Bill Niece of the middle Rockhouse section of the county.

The “Old Boone Tree,” which has weathered the storms of the centuries, now lies as a fragment across the North Fork of the Kentucky River near Kona. The tree was felled earlier this week after a severe storm swept the area. “Into the bark of this tree, in a somewhat sheltered nook, the name of ‘D. Boone’ with a shattered uncertain date was cut when the first settlers went into the neighborhood and settled the place,” The Mountain Eagle reports. “Among the original settlers in this section it was always understood that after Daniel Boone had made his explorations far down into the main Kentucky River sections [of Kentucky], he returned to North Carolina by the direct way through the headwaters of the North Fork.”

The people of Hindman and Knott County are “the happiest and best people in the world because the scarecrow we call progress has not yet undermined and thrown the people off their feet,” The Mountain Eagle says in a front-page commentary. “Over in Hindman they still play marbles and horseshoes in the streets. Now and then a spat has occurred because someone ambled along in an automobile and scattered the great marbles.”

What is said to be a $20,000 “electric power plant” will light up Lewis Park in a baseball game to be played in Whitesburg Saturday night between the American Athletics and the Whitesburg team.

Dr. T.R. Collier, a long-practicing physician in Elsiecoal [Hotspot], has rented offices in the Hogg building and will start practicing his profession in Whitesburg soon.

The Letcher State Bank is moving its quarters from the corner where it has been located for years to the Lewis building in the room formerly occupied by the post office.

Mrs. Hattie Cook was scheduled to go on trial today in connection with the February 26 shooting death of her husband, Ed Cook. Mrs. Cook, who is charged with murder, said her husband came home drunk and grazed her head with a gunshot. She said she then got an old pistol and fired one shot in return, hitting him in the side.

Funeral services were held in the Tolliver Town schoolhouse Wednesday for Letcher County’s only accidental death victim for the July 4 holiday period. Jackie Bentley, 17, son of Mr. and Mrs. B.F. Bentley of Neon, drowned Monday while he and companions were swimming in an abandoned truck-mine lake at Potter’s Fork.

Two McRoberts men were shot fatally and a Pike County deputy sheriff was wounded in a shooting June 29 at Three Mile in Pike County, near the Letcher County line. Dead are Addy Polly and John McKenzie, both between 35-40 years old. Wounded is Deputy Sheriff Sam Guy of Shelby Gap. Pike County Sheriff D.T. Moore said the shootings occurred after several Letcher County miners crossed the county line “raising a ruckus.” Sheriff Moore said Deputy Guy was called to the scene after another Pike County peace officer became overwhelmed. He said that as Guy approached the truck the miners arrived in, someone fired a shot at the deputy, who then returned fire. The sheriff said he believes that Guy wounded McKenzie and that Polly was fatally wounded by a shot McKenzie fired while he was falling.

Consolidation Coal Company is seriously considering closing its Mine 155 near Van Lear in Floyd County. A company publication said the mine is becoming too costly to operate.

An old Mountain Eagle clipping entitled “It Is So” was reprinted this week and points out that Letcher County was formed in 1842 and named for then- Kentucky Governor Robert P. Letcher. The county was formed from parts of Perry, Harlan and Floyd counties. At the time, Letcher County extended to Troublesome Creek to where Hindman is now and did not include the Elkhorn Creek territory where Jenkins is now located, as that belonged to Pike County. When Knott County was formed in 1884, the Troublesome area was given to Knott and the Elkhorn Creek area taken from Pike and given to Letcher.

Most Letcher County residents think county schools should open after Labor Day, according to a recent survey conducted by The Mountain Eagle. However, their wishes won’t make much difference this year because the Letcher County Board of Education has voted to open school on August 24, still a week later than the earlier talked-of August 17.

A Letcher Circuit Court jury this week found Sam Bates guilty of selling alcoholic beverages in a dry territory. His punishment was fixed at a $20 fine and 30 days in jail.

A lawsuit seeking removal of Alvin Holbrook from the Letcher County Board of Education was filed in Letcher Circuit Court Wednesday. Attorney Harry M. Caudill filed the suit on behalf of Kentucky Attorney General Jo M. Ferguson. The lawsuit was also authorized by the county school board Tuesday in a meeting held without notice to the public. The suit alleges Holbrook does not have an eighth-grade education as required of board members by state law. It also alleges that Holbrook automatically vacated his office on the board by moving from Letcher County to Cumberland in Harlan County in December. Holbrook is on the two-member side of a three-to-two split in board membership. He is a strong supporter of Superintendent W.B. Hall, who is at odds with Board Chairman Dr. B.F. Wright and board members Arnold Hall and Kern Whitaker.

J.H. Brown killed a rattlesnake at Ulvah after the snake bit one of his dogs. The rattler measured 44 inches long and had 13 rattles and a button.

Five Letcher County schoolteachers were injured Monday, one of them seriously, in a traffic accident in Letcher County that occurred as the teachers were returning home from Pikeville College. Seriously injured was Sabina Francis. Treated by the Whitesburg hospital and then released were Bonnie Pratt, Lois Stallard Adams, Sonia Branham Hunsucker, and Glenna Pace.

Carrie Combs of Knott County was fatally shot and Arnold Hall of Deane was injured by gunfire near the Knott-Letcher county line. Hall is a former member of the Letcher County Board of Education. The sheriff ’s office said it was not certain how the shooting occurred. The shots appeared to come from the woods, apparently from a rifle or 38-caliber weapon.

Letcher County Day will be held July 4. Events will include a carnival in the courthouse area, an art show in the Short Street alley, a craft show in the yard of Eagle Printing Company, local music and a talent show in front of the Presbyterian Church, storyteller Leonard Roberts, a beard judging contest at the Presbyterian Church, a race from Pine Mountain to Whitesburg, a horse show in the Whitesburg show ground, a dance in the A&P parking lot, and a fireworks displays at the athletic field. A moonshine still will be on display all day.

The Glo-Coal Mets have assured themselves of the Whitesburg Little League Baseball Championship through a 7-6 win over the VFW team. The Mets were led all year by their fine first baseman, Bill Martin Collins. William Floyd Mercer coaches the team.

A six-count criminal indictment was handed down by a federal grand jury in Catlettsburg charging Blue Diamond Coal Co. and Scotia Coal Co. with violations of the mine safety laws in connection with the Scotia mine disaster. The criminal charges are the first to be placed against the owner and subsidiary operator of the Scotia mine at Oven Fork, where 26 men lost their lives in two separate methane gas explosions March 9 and 11, 1976.

Blue Diamond Coal Co. has filed a $100 million suit against Blackwood Land Co., owner of coal properties near Eolia — including the Scotia Mine —, which the Knoxville-based corporation leases and mines. Blue Diamond claims Blackwood intentionally interfered with a proposal last fall to sell all the coal assets to Standard Oil of Indiana by casting a cloud upon the title of the lease at Scotia.

“Every Which Way But Loose” starring Clint Eastwood is playing at the Alene Theatre in Whitesburg for six days.

The Letcher County Jail will be reduced to a 92-hour holdover facility effective Aug. 1, forcing the county to house longterm prisoners in jails in surrounding counties. The fiscal court has passed a resolution to begin planning for a new jail at its July meeting.

“It looks like the rain has washed June away and floated us right into July,” writes Ice correspondent Sara C. Ison.

Timothy Fisher of Tennessee was injured when the beer truck he was driving overturned on U.S. 23 at Jenkins. According to Jenkins Police Chief Bill Tackett, the truck’s brakes overheated coming down the mountain from Pound Gap. “According to witnesses, they were on fire. They could see the flames,” Tackett said.

Welfare recipients living in Kentucky’s 49-county Appalachian region are more likely to stay on welfare longer than those in urban or other rural areas, according to a new study. The researchers said the state’s welfare population is becoming “increasingly white and Appalachian.”

Independence Day festivities will include fireworks displays on July 3 in Isom and July 4 in Whitesburg.

A quilt made by Thelma Gibson Banks of Little Cowan Creek is on exhibit at the new Kentucky History Center in Frankfort. Mrs. Banks completed her quilt, titled “Cherry Tree Cross”, about 1987. It features red cherries and green leaves appliquéd on a white background.

Bear sightings have become more frequent around Whitesburg during the past few weeks and officials with the Kentucky Department of Fish and Wildlife Resources say bears will continue to be visible in Letcher County unless food sources are secured. Letcher, Pike and Harlan counties are three top counties in Kentucky where bear sightings are reported.

Letcher County emergency crews worked quickly to find a hiker lost in the Bad Branch Nature Preserve. The hiker had a cell phone with a very weak signal and didn’t know where he was, but was able to get in touch with an E-911 operator. Within two hours, volunteers had found the hiker and returned him to safety.

Gary Mullins has been named to replace the retiring Truman Thompson as chief of the Whitesburg Fire Department. Mullins, a longtime volunteer fireman, had been named assistant fire chief last year.

Fourth of July firework celebrations will take place in several locations in Letcher County including Isom, Neon, and Whitesburg. The Whitesburg show will include a free concert by Billy Joe Royal.