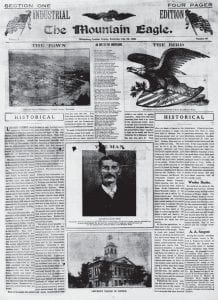 Special edition told county’s history INDUSTRIAL EDITION — The Mountain Eagle was just two years old when this special edition of the paper appeared in July 1909. The front page of the paper, which is shown here, carries the history of Letcher County as it was then.

Residents of Bottom Fork, Bill Moore’s Branch, Kentucky River, and Beefhide, near the Pike-Letcher line, will no longer have to travel all the way to Millstone to vote in elections. The Letcher County Fiscal Court has ordered the Millstone precinct divided into two voting precincts, one of which begins at the top of Pine Mountain opposite Bottom Fork Gap to the mouth of Bill Moore’s Branch and on to the Pike-Letcher line to include Potter’s Fork, Wright’s Fork and Marshall’s Branch. The new precinct will be established near the home of Mattie Wright on Elkhorn Creek and shall be known as Elkhorn Precinct No. 8. The remainder of the Millstone precinct will be established near the forks of Millstone and will be known as Millstone Precinct No. 2.

“Enclosed find a dollar (and) feed it to the bird,” writes Army soldier Melvin Caudill, who is stationed at Ft. H.G. Wright in New York, where he wished to receive a year’s subscription to The Mountain Eagle. “My home is on Linefork in Letcher County,” Caudill writes. “I am watching the soldiers as they engage in a sham battle. There are 1,600 soldiers in camp at this place.”

Examinations will be given in Whitesburg on August 4 for potential students who wish to qualify for free tuition to Eastern Kentucky State Normal College in Richmond.

The Mountain Eagle’s mail circulation has grown to nearly 500 subscribers as the paper prepares to enter its third year in business.

A third three-day working week at U.S. coal mines has resulted in a drop of nearly 50 percent in production compared to last year.

Robert Mitchum and Barbara Bel Gaddes star in the psychological western “Blood on the Moon,” showing Sunday at the Elinda Ann Drive-In Theatre in Whitesburg.

Errol Flynn and Viveca Lindfors star in the adventure romance film “Adventures of Don Juan,” showing Sunday and Monday at the Haymond Theatre at Cromona.

Jimmy Stewart and June Allyson star in “The Stratton Story,” a true story about the short-lived but inspirational Major League Baseball career of pitcher Monty Stratton.

Letcher County has 22,032 voters eligible to cast ballots in Saturday’s primary election for county offices. Of those voters registered, 11,840 are Democrats and 10,192 are Republicans.

Willie Mae Dykes was charged with selling alcoholic beverages in a dry territory after a raid on a trailer at the Smoot Creek Inn netted 75 cases of beer.

Several Letcher County families have failed to participate in the War Memorial Survey of World War II. The names of the soldiers who gave their lives will be included in a war memorial that will be part of the new Memorial Coliseum at the University of Kentucky in Lexington.

The Belcraft Elementary School basketball team defeated Dry Fork Monday night, 26 to 6, but then lost to Kingdom Come on Tuesday night. The final score was not available at press time.

J. Clyde Frazier this week took over operation of the Famer’s Supply Company, which he purchased from Roy Gilley. Frazier has operated an appliance store here for the past 11 years. He will combine both operations at the present Farmers Supply Building, located past the L&N depot in Whitesburg. The combined store will handle Philco appliances, Purina feeds, furniture, hardware, and PeeGee paints.

Russia and its premier Nikita Krushchev found their way into the discussion of Letcher County school problems at the Board of Education meeting Saturday when Supt. W.B. Hall and Board Chairman Dr. B.F. Wright accused each other of trying to be the “Krushchev” of the county school system. Hall and Wright are at odds frequently.

Breaks Interstate Park, a natural marvel unknown to many Kentuckians, is rapidly becoming a big tourist attraction. Lying in two states, Kentucky and Virginia, the area is often called the “Grand Canyon of the South.” Known to eastern Kentuckians for many years at “The Breaks of the Big Sandy,” the area remained inaccessible until the construction of Kentucky Highway 80 in 1951. However, Daniel Boone found his way there to hunt in 1767 and left his name on a tree. The Russell Fork River created the gorge as it plunged downhill some 400 feet in five miles.

Jenkins Independent Schools will open August 21 for the 1959-1960 school term.

Twenty-five Letcher County mining companies are included in a list released this week by Attorney General John B. Breckinridge of firms which have been ordered to comply with the state workmen’s compensation law.

The Jenkins City Council has voted to increase the city tax rate by 12 cents per $100 property valuation during the coming fiscal year. The tax boost would produce the city an estimated $10,000 to $12,000 additional revenue.

Private First Class Larry Yonts, son of Elder and Mrs. Lonzie Yonts of Deane, is serving with the 101st Airborne Division in Vietnam. He is a graduate of Fleming- Neon High School, and was employed in Cleveland, Ohio prior to entering the army.

Writing about the recent Apollo moon landing, Ice correspondent Siller Brown says, “I was looking at the moon last night. She looked big and bright as ever. Maybe she won’t miss the little dust they brought back.”

Federal and state mining agencies closed in on an investigation launched by the Letcher County Sheriff ’s Office of the Love’s Branch road project near Colson. An agreement between County Judge Robert Collins and USACO, a Germanowned corporation, said the road would be improved by the county with USACO footing the bill. USACO hopes to build a unitrain loading facility and coal washer above the half-mile county section of road and plans an eventual coal gasification and liquefaction plant. Work at Love’s Branch was ordered to halt last Thursday by a cessation order from the federal Office of Surface Mining for mining without a permit. Federal investigators were called in after the sheriff ’s department checked into the removal of coal at the road site.

After threatening to strike last week in protest of a cutback in health insurance and cancellation of life insurance, South East Coal Co. employees decided Saturday to compromise with the company. Employee representatives met with company officials and reached a tentative agreement. The employees then decided to accept the company’s deal, foregoing a strike

Letcher County public school students scored lower than the state average in all areas on the first statewide testing for competency in the basic learning areas.

Lexington will continue with plans to study the possibility of building dams in eastern Kentucky, despite opposition from a Letcher County citizens’ group. Seven members of the group and two former Letcher Countians who live in Lexington attended a meeting of Lexington’s Kentucky River Steering Committee to protest the idea of building dams in the mountains to supply water for Lexington. The Lexington committee voted 14 to 7 to go ahead with its plans for dam studies.

Letcher Fiscal Court voted unanimously this week to help the cities of Fleming-Neon, Jenkins and Whitesburg pay the salary of a yet-to-be-named employee whose main job will be trying to convince companies to locate their businesses somewhere in the county.

Police say two scrap-iron collectors caused $10,000 in damages to an endloader by cutting its loader arm with a torch. Letcher County Sheriff Ben B. Taylor said he had impounded one of the men’s 1973 International pickup truck with a loader arm in the back.

Image Entry has agreed to pay rent beginning in October to Whitesburg in exchange for using space in City Hall. The company has been seeking another site but has not found one yet. The city will charge Image Entry $2,029 a month rent.

Two Letcher County residents, Amanda Jent and Ashley Wyatt, are among 26 students attending a Young Women in Science program being run by the University of Kentucky’s Center on Drug and Alcohol Research. The program, funded by a $1.3 million federal grant, is designed to encourage young Appalachian women to pursue careers in science, particularly in drug and alcohol research.

“Star Wars Episode 1: The Phantom Menace” is playing at the Jeremiah Drive- In Theatre this weekend.

State and county road crews are still cleaning up damage that occurred across Letcher County during heavy weekend storms. Two to three inches of rain fell in Letcher County in about 30 minutes Sunday morning.

Coal producers are making further cuts in production as the recession throttles demand for energy and steel, undermining second quarter sales and profits. Demand for coal, which produces about half of the nation’s electricity, has slumped with the economy this year.

A health and wellness center for all students and a new math teaching program for elementary students are among the ways the Jenkins Independent School District will use federal stimulus money which has made its way to local school districts. Jenkins Superintendent Debbie Watts announced the arrival of the stimulus money and elaborated on plans for using the money at the Jenkins School Board meeting. Watts said Jenkins had received the money through President Obama’s economic stimulus program.