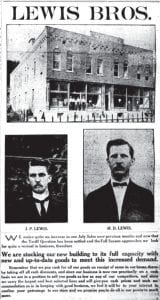 Mountain Eagle editor Nehemiah M. Webb this week announces his candidacy for the office of Justice of the Peace [magistrate] in District One. “I despise to have my name in my own paper, but for once here she goes,” Webb says in the announcement.

Next week will end the second year of The Mountain Eagle’s life.

Saturday’s primary election for countywide offices brought out the largest number of primary election voters in the history of Letcher County. In the Democratic race for Letcher County Judge, Enoch R. Holbrook received 2,502 votes compared to 1,012 for Sandy Adams, the opponent nearest him. G. Bennett Adams was unopposed in the Republican race for county judge. In the Democrat race for state representative, Harry M. Caudill beat S.J. “Sam” Bates, 2,499 votes to 417 votes. Bill Adams was unopposed on the Republican ticket.

U.S. Navy officials have identified the victim of a plane crash on Black Mountain in Letcher County, but are withholding his name pending notification of his next-ofkin. The Navy fighter plane’s wreckage was found at the head of Collier’s Creek. The crash occurred about 5 p.m. The victim was identified by a Navy Air Corps ring he was wearing and the number inscribed on the plane. It took rescue workers until early Wednesday morning to get the body out of the dense mountainous terrain. The cause of the crash remains unknown. The pilot is said to have flown over the Cumberland Airport several times before the crash, at an altitude of about 2,000 feet.

Funeral services were held Monday for Elmer Garrett, 23, who died of injuries he received in a car wreck last Friday at the head of Rockhouse, near Hemphill. Garrett, an employee of Lewis Wholesale Company, Whitesburg, was a veteran of the European Theater in World War II. Survivors include his parents, Mr. and Mrs. Harrison Garrett, Whitesburg.

The City of Whitesburg was founded 107 years ago, according to a Mountain Eagle advertisement purchased by Letcher Wholesale Company.

Betty Grable and Douglas Fairbanks Jr. Star in “The Lady in Ermine,” showing Aug. 14-15 at the Haymond Theatre in Cromona.

The Jenkins High School football team will open its 1959 schedule at Ketron, Tennessee on August 21. Fleming-Neon and Whitesburg will open their seasons August 24 in a game against each other at Whitesburg. Jenkins will have a new coach this season, as John Morgan, an assistant coach for the Cavaliers the past three seasons, has been named to replace head coach Nick Diachenko. Jack Hall and Ed Moore remain the head coaches at Fleming-Neon and Whitesburg.

Whitesburg City Councilman Ferdinand Moor has been named the city’s mayor pro-tem during the absence of Mayor Arthur Banks, who has accepted a new position with the Belknap Hardware Company of Louisville and is now living in that city.

A two-story building constructed on a lot on Fieldcliff in Whitesburg was the center of controversy at the most recent meeting of the Whitesburg City Council. The controversy began when Whitesburg City Attorney, Leroy Fields, who said he was speaking both as a city official and a resident of Fieldcliff, criticized the city’s decision to grant a building permit to Lee Cooper, who is building the new structure. Fields said to the council the building is an “eyesore” that has already “knocked several thousand dollars off the value of our property.” Cooper did not attend the meeting. However, Albert Jones, a friend of Cooper’s and an official with Home Lumber Company, argued the building is an “asset” to the neighborhood and the town. Jones said the building is being built of the finest materials available and will be one of the most attractive structures in town. Jones also pointed out that the building is replacing two cowsheds torn down by Cooper.

Quillen Drug Store owners Fred Coffey and Cossie Quillen this week purchased the drug store at Neon formerly owned by the late Dr. D.V. Bentley. The two men bought the store from Gerald Fletcher, son-in-law of Dr. Bentley. It will be known as the Neon Rexall Store. Coffey, a registered pharmacist, and Quillen own and operate Quillen Drug Store in Whitesburg.

Dewey Lake in Floyd County, currently the smallest of the five major lakes in Kentucky, drew more visitors over the July 4 weekend than did the much larger Dale Hollow Lake, which is one of the most beautiful impoundments in the TVA chain of lakes. According to the U.S. Army Corps of Engineers, 13,000 people visited Dale Hollow during the July 4 weekend, while 18,335 were at Dewey Lake.

In an editorial touting bituminous coal as “the nation’s number one bargain,” The Mountain Eagle points out that the price of coal at the mine is only one cent per ton higher today than it was in 1943.

Whitesburg assistant football coach James Gose and Mrs. Gose announce the birth of their third child, a boy named Joe Pat on July 24, which is also the coach’s birthday.

A group of union coal miners and miners’ widows have filed a damage suit that accuses the United Mine Workers of America, the union’s Welfare and Retirement Fund, a union-owned bank, and the largest association of mine owners and operators of conspiring to betray the rank-and-file membership for private profit. Those filing the suit are demanding $75 million in compensatory damages not counting punitive damages. They also asked the U.S. District Court to put the Welfare and Retirement Fund in receivership to prevent what they call further “plunder” of the union members’ assets.

Former Kentucky State Commerce Commissioner Katherine Peden took a look at Whitesburg’s new Industrial Park this week and pronounced it ready for inspection by industrial prospects. The nine-acre site is big enough for a 400,000-square-foot building and off-site parking will be available for 500 cars.

An article by former Letcher County Judge Arthur Dixon talks about the oldtime country store, which he says is a disappearing landmark. Photographs of Mrs. C.B. Caudill and her general store, the C.B. Caudill Store in Blackey, accompany the story.

In a special meeting, Letcher Fiscal Court passed a resolution approving use of county workers and equipment on construction of an access road to a coal operation being developed by a group of German investors. The court also confirmed an agreement with USACO, the German-owned company, under which the firm will repay the county for the work on the road, located on Love’s Branch.

A five-day United Mine Workers strike at Beth-Elkhorn’s Mine 22 ended late Sunday after the company agreed to miners’ requests regarding temporary job assignments. The strike began when a man who requested a temporary job was turned down.

“Hooper,” starring Burt Reynolds, will be shown at the Alene Theatre in Whitesburg this weekend.

Seven men involved in a vehicle theft and dismantling ring that ranged from Letcher County to Delaware and Georgia have been sentenced to terms ranging from six months to 15 years in prison. The men were convicted of 38 counts in June of running a so-called chop shop in McRoberts.

The section of U.S. 23 between Dorton in Pike County and the Virginia state line at Jenkins in Letcher County was left out of a state road plan earlier, but Governor Wallace Wilkinson said the road is defi- nitely in the plan.

Justine Richardson of Whitesburg has started a summer day camp. Seventeen fifth and sixth graders from West Whitesburg Elementary School are involved in the program this year, but she hopes to eventually offer the camp in the Fleming- Neon and Letcher communities as well as Whitesburg.

Eastern Kentucky is heading into the driest part of the year with rainfall amounts already six inches below normal. And there’s no sure rain in the forecast. “This actually should be the wettest time of the year,” said Mike McLane of the National Weather Service at Jackson. So far the cities in Letcher County aren’t having any problems with water supplies. The problems are in the rural areas, where the short bursts of rain over the past three months have failed to replenish the aquifers that supply wells.

The final section of U.S. 23 in Letcher County may open to the public within a month, making it the first four-lane highway to traverse eastern Kentucky. Other highways in the region have sections with four lanes, but none are four lanes throughout their length.

The Red Fox Golf Course near Carr Creek Lake will be a “Scottish links” course that uses the existing terrain and could be ready for golfers as early as October of next year, officials of the Tri-County Cooperative Development Authority say they were told by architects hired to develop the course.

“The Sixth Sense” and “Runaway Bride” can be seen this weekend at Whitesburg Cinema.

The Whitesburg City Council voted to give final approval to a new ordinance prohibiting the use of motorized vehicles on the city’s walking trail that leads from downtown to West Whitesburg. The vehicles are prohibited because of safety concerns for walkers and bicyclists, and the damage motorized vehicles cause to the blacktop.

The Letcher County Sheriff ’s Department poured out about 26 gallons of old moonshine and half-pint bottles of liquor, mostly bourbon whiskey, that had been stored in an evidence locker. Sheriff Danny Webb said the moonshine and liquor were about five years old and no longer needed to be kept as evidence.

Alpha Natural Resources has completed the takeover of rival Foundation Coal Holdings, winning shareholder approval of a deal that creates a national power out of two regional players even as the recession hammers energy demand. Abingdon, Va.-based Alpha now has 6,200 employees and 61 mines in Wyoming, West Virginia, Kentucky, Pennsylvania and Virginia. It is the country’s third largest coal miner operator behind Peabody Energy and Arch Coal.

Employees of Enterprise Mining Co.’s Roxana preparation plant rescued a goat that was trapped on top of a highwall for nearly a month. Superintendent Jeff Mullins, day shift foreman Gary Griffith and other employees lowered food and water to the goat in a bucket. They baited a wire cage with food and lowered it, and the goat eventually entered the cage, allowing them to pull it up to safety. Mullins says he is now seeking a nice home for the goat.