Letcher County’s strawberry industry lasted about three years in the 1950s. One who helped recalls the hard work. 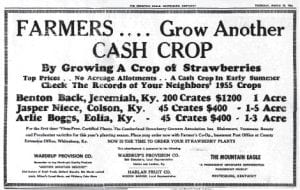 In the mid 1950’s, the University of Kentucky, through its Cooperative Extension Service, organized a strawberry growing industry in Letcher and other counties of southeastern Kentucky. Local farmers grew strawberry patches, some an acre or more in size. The berries were shipped by truck to markets in large cities. At the advice of Letcher County’s then-UK Extension Agent Bob Fike, most farmers grew Tennessee Beauty strawberry plants.

On certain days — likely three times a week — during the late spring picking season, local youths were hired at 20 cents per gallon to pick the berries. After being picked, the berries were graded by size and condition in a flat-bottomed, triangular pan with a 3/4-inch hole near one corner. Any berry small enough to pass through the hole was not shipped. The berries that passed inspection were gently poured out the opened corner of the grading pan into wooden quart baskets. The baskets were then placed in a wooden crate, which likely held six gallons. A framed partition was placed between layers to prevent the berries in the lower layers from being crushed. 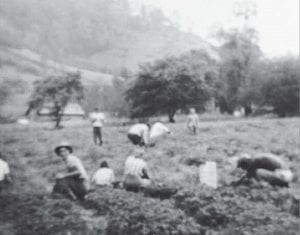 Doreen Fields Calhoun posted this photo of her family’s strawberry patch in Letcher County on Facebook with this comment: “Picking strawberries to send to market in the 50’s, it was chilling cold in the mornings; we even had a fire at the end of the patch. We had to have them picked, graded, and packaged for the truck to pick them up at 10:30. My house now sits on this site. My mom hired people from all over to pick for her.”

Once filled, the crates were identified with the name and address of the farmer and taken to a nearby pickup site. A commercial truck from the Somerset area collected the crates, which were combined with crates from other pickup sites and eventually trucked to warehouses in the big cities. The berries were distributed from the warehouse to local stores. The profits from the sale were returned to the county of origin and distributed to the local growers based on the number of crates shipped.

According to an article on the front page of the January 12, 1956, edition of The Mountain Eagle, plans had been made to build a strawberry processing facility in Perry County large enough to handle all the berries produced by 1000 acres of strawberry plants, but I don’t recall any such processing plant becoming operational.

In my neighborhood, Jim Caudill had a strawberry patch on the current Letcher Elementary School campus. Monroe Blair had one where Larry and Sandy Hall now live. Eslie Blair’s sons had a strawberry field on Grant Blair’s property between Grant’s house and Tommy Dixon’s house. Benton Back grew the berries behind his house, and John Duke, Johnny Fields, and Solomon Hampton each had patches between the twin bridges. These seven strawberry patches were on a one-mile stretch of KY Highway 7. A local pick-up site was in the shade of some large sycamore trees across the highway from Grant Blair’s store.

Monroe Blair’s wife, Vina, kept detailed financial records of their strawberry growing business. After one year in the business, she discovered the profits received barely covered the expenses of producing the crop. The following incident helped reduce the season’s profits:

The berries that were picked immediately before Memorial Day weekend were shipped to Chicago, but the truck arrived after the warehouse was closed for the long weekend. By the time the warehouse opened on Tuesday morning, the berries had spoiled in the truck and could not be sold. Thus, the local growers received no income for that shipment, yet they still had to pay the transportation cost and driver expenses for the trip. So the next year, like many other strawberry farmers, the Blairs sold their berries locally. Customers could pick their berries for 50 cents a gallon or buy already picked berries for $1 per gallon. The picked berries not sold were brought home to be eaten fresh (but not by me), usually crushed with a potato masher and mixed with cream and sugar. Some were put in the freezer or made into preserves or jams.

One bountiful year, Dad even made some strawberry wine. Although the income from local sales was nowhere high enough to provide a living, it was certainly better than the year in the commercial industry.

The income from strawberries was crammed into a month-long ripening season, but the work raising the berries was a yearlong drudgery. The patch had to be rejuvenated after the ripening season ended. One-year-old plants grew the best berries while older plants grew berries of poorer quality, if they bore at all. To rejuvenate the patch, each row was plowed lengthwise a few times using a single shovel plow, leaving a narrow strip of untouched plants between the furrows. The patch was then plowed at right angles to the rows already plowed, again leaving a narrow strip of plants between furrows. When the plowing was complete, the majority of the plants had been plowed up. The remaining plants extended runners to grow a new crop of plants, which produced berries the following year.

Strawberries need lots of sunshine and a good airflow to produce well. Since the berries grow so close to the ground, weeds and grass reduce the berry production. Thus the farmer had to use vigorous methods of weed control. The patch was fenced and geese, which eat grass and certain weeds, were put inside. The geese were fed a small amount of corn on one end of the patch and watered on the other, with the farmer’s expectation that the geese would feed on greenery on their trips back and forth between corn and water. The geese were removed from the patch during the winter and spring. They left behind too much manure to be in the patch before or during picking season.

Of course, the geese did not eat all weeds. The remaining weeds had to be pulled by hand, and that task not only was hard on one’s back, but also hurt one’s knees. It seemed like it took forever to get to the end of that 200-plus-foot row, and then there were 25 or 30 more rows to weed!

Now, I had never been overly fond of laboring, but I hated the job of weeding the strawberry patch so badly that I refused to eat strawberries for several years. But, later in life I surprised everyone, including myself, by putting out a small patch for family consumption. However, I had no intentions of going commercial.

The Blairs mulched their patch with straw in late December to reduce damage to the roots of the plants by the frequent freezing and thawing of the ground and to keep the plants from blooming too early in the spring. The layer of straw slowed the change of temperature of the ground. The straw acted as a blanket when freezing air moved in and acted as a shade to reduce the sun’s warming the ground during the day. It was recommended that before the straw was spread over the patch, the strings holding the bales together be cut and the straw be dunked into boiling water heated in copper wash boilers or in washing tubs to kill any seeds that were in the straw. Once the danger of frost had passed the following spring, much of the straw was raked from the rows into the walking path between rows. And any early growing weeds and grass had to be pulled by hand.

The commercial shipping of strawberries lasted about three seasons — probably 1955, 1956, and 1957. The strawberry growers turned to local sales, but with so many strawberry patches competing for the local market, many farmers plowed up their patches after a year or two.

The Blairs kept their patch until after the 1959 season. Mountain Eagle columnist Ike Adams (“Points East”) once stated that among the last to quit the strawberry business in Letcher County were his father, Elmer Adams on Blair Branch, and James Fields on Bull Creek. These two hardy farmers sold berries until the early 1970’s.

Tony Blair is a retired teacher living in the Jeremiah area of Letcher County.