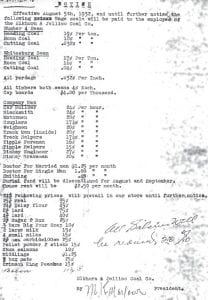 Notice of cut in pay – The old Marlowe coal camp, built by the Elkhorn and Jellico Coal Company shortly after the company was founded by M.K. Marlowe in 1918, has been in the news recently as the future site of a planned shooting and archery range that will be built near West Whitesburg, in part with a $3.5-million grant from the Abandoned Mine Lands Program. The Marlowe camp was also the subject of discussion in 1932 after Mr. Marlowe sent the letter at left to all employees at the Marlowe mine and the former Sandlick Coal Company mine located nearby, announcing that their wages would be cut effective immediately because of a downturn in the coal market. Medical benefits were also reduced and prices were changed for food and dry goods sold in the Marlowe company store. The copy of the letter shown at left was discovered recently by former Whitesburg resident Mike Majority in a collection of historical documents and photographs of Letcher County that belonged to his late father, Frank Majority, who was a well-known stone mason and photography buff here.

Mr. Jack Frost has made a few light visits in the Eolia area. Meanwhile, the Eolia School reopened Monday after a three-week vacation for foddering.

Noting that all four pages of this week’s edition are crowded with advertisements related to the coming county election, Mountain Eagle editor and publisher Nehemiah M. Webb writes, “Of course our readers will see what the candidates are doing to us, and will bear with us in this great trial. And we promise to give them a good newspaper as soon as it is over.”

A Whitesburg girl is recovering from serious injuries she suffered when she tripped and fell on the sidewalk and ended up in the basement of the new bank building. “It was quite a distance to fall and the greatest wonder is that she was not instantly killed,” The Mountain Eagle reports on the accident involving Miss Lake Erie Salyer. “As we go to press, she is doing fairly well and will recover.”

Local physicians are warning of an outbreak of diphtheria, which has already caused some deaths in Letcher County.

A 22-year-old coal miner died at Thornton Saturday morning when he was thrown from the motor he was operating and then run over by it. The accident, which claimed the life of Leslie Mitchell, occurred at the Apex Coal Plant and left the entire community in a state of shock. Mitchell was married and the father of a young baby.

Dock Boggs, who has entertained many people in eastern Kentucky and southwestern Virginia with his music, will soon leave for New York City to record music for Brunswick, which is said to make the world’s best phonographic records.

Clintwood (Va.) High School scored a touchdown and extra point in the second quarter and then held on to defeat Jenkins High School, 7 to 0.

The old Fleming Hospital has been remodeled and a new wing added. The hospital, which was owned by the Elkhorn Coal Corporation from 1918 until 1946, will now have two operating rooms, one for major surgery and one for minor surgery. It will also have a nursery, a waiting room, and a dietary kitchen. Dr. E.G. Skaggs and Dr. A.B. Carter now own the facility. On staff are now four doctors, four registered nurses, six nurses’ aides, and two orderlies.

Funeral services were held in Letcher County this week for Private Sherman Leroy Collins, 21, who died October 1 of injuries he suffered September 28 in a truck crash while on maneuvers near Eglin Field, Florida. Collins was one of several paratroopers aboard a truck that overturned while training for massive joint air-ground exercise beginning next month. Twelve other soldiers were injured in the crash.

Shorty Marcum of Jenkins pleaded guilty to voluntary manslaughter today (Thursday) in Letcher Circuit Court and was sentenced to 15 years in prison. Marcum had been indicted for willful murder in connection with the slaying of Lena Harris near Neon Junction last October 8.

The Fleming-Neon Pirates defeated the Jenkins Cavaliers on the Fleming Field this past Saturday night, 54 to 6. The win improves the Pirates’ record on the season to five wins and one loss. The team narrowly lost to Lynch two weeks ago.

Former Whitesburg High School halfbacks Buddy Fields and Bobby Kincer, now in their senior year at Morehead State College, are among the top ground gainers in the Ohio Valley Conference. The two are lifelong friends and constant companions on the Morehead campus.

Doctor R. Dow Collins is entering his fourth decade of service as the public health officer for Letcher County.

The Jenkins and Letcher County school boards have directed their attorneys, Harry L. Moore and Harry M. Caudill, to look into the possibility of merging areas now served by Marshall’s Branch and Beefhide schools with the Jenkins Independent School System.

Letcher Circuit Judge Courtney C. Wells charged the Letcher County Grand Jury again this week to investigate violence growing out of the coal strike and bring to trial anyone against whom it had evidence.

Parents at the Kingdom Come School want better facilities for their children. They told members of the Letcher County Board of Education Saturday that the school needs at least 200 new seats. The parents said many students have no desks on which to write, but sit in straightbacked chairs, many of which are broken. Board members promised to see what they could do.

A car-washing jamboree launched the fund-raising campaign of the senior class at Letcher High School. Money raised during the event will help finance the class of 1960’s senior trip next spring.

The Senate last week approved new provisions for the food stamp program that would expand its coverage and provide free stamps to families with $60 or less cash income per month. Thirty to 40 percent of Kentucky families would be eligible under the Senate plan, and between 225,000 and 337,500 families could participate in the future, compared to the 31,000 families now actually getting the stamps.

“There was a large crowd at the Carcassonne Community Center last Saturday night,” writes Carcassonne correspondent Thelma Caudill. “Everyone had a wonderful time. Coy Martin didn’t get to come and play for the dance so Lee Sexton came and played. We plan to have another square dance soon.”

Because of the Letcher Fiscal Court’s inability to adopt the National Flood Insurance Program, the county may not be allowed to compete for a $3 million comprehensive Housing and Urban Development grant which is vital to a $18 million water, sewage and housing rehabilitation program proposed for the Fleming-Neon area. In addition to jeopardizing that project, the lack of the flood insurance program means the end to all federal aid for projects in the county’s 100-year flood plain and a stop to any federal housing loans for property in the flood plain. It has been estimated that 88 percent of the homes and businesses in Letcher County are within the flood plain.

Two insurance companies which held coverage plans for the Scotia mine at the time of the 1976 explosions have filed a $1.6 million suit in Pikeville’s U.S. District Court against the Interior Department’s MESA alleging that MESA’s negligence was the cause of both the March 9 and 11 explosions. The explosions killed 26 men, including three mine inspectors, and have resulted in numerous suits and counter-suits in federal courts as well as six federal indictments against Blue Diamond Coal Co. and its subsidiary Scotia Coal.

Despite three inches of mud and water on the football field, the Whitesburg Yellowjackets managed to score 20 points against the M.C. Napier Navajos Friday night while holding the Navajos scoreless. It was the Jackets’ second district victory against no losses.

The United Mine Workers’ strike against the Pittston Coal Group moved into Letcher County this week as workers belonging to a Jenkins local were ordered to stay off their jobs. Members of UMW Local 5741 are among 249 workers in three union locals involved in selective strikes at two Pike County coal operations once owned by Bethlehem Steel Corp.

Letcher Countians have donated food and supplies for residents of Manning, S.C., which was devastated by Hurricane Hugo. A truck loaded with thousands of dollars’ worth of supplies left Whitesburg Friday to help give relief to the South Carolina community. The eight-ton truck belonging to the LKLP Community Action Council carried 50 cases of baby supplies, 80 cases of distilled water, 40 cases of Royal Crown Cola and untold amounts of canned food items and clothing to the hurricane victims.

Letcher Fire and Rescue has decided to buy a used Class A pumper truck, which could lower the department’s rating from a class 10 to a class 9. This would cut homeowners’ insurance premiums drastically. Fire Chief Wallace Bolling said he was hesitant to buy a new truck because the department had just managed to pay off $55,000 of debt. Insurance agents said the change in rating from a class 10 to class 9 would cut homeowners’ insurance cost nearly in half.

State employment and social services workers will hold a benefits fair for former Golden Oak Mining Co. employees to tell workers what help they might qualify for and how to get it.

State officials have denied a request to pump water from an abandoned coal mine as a test to see whether there is an adequate supply for the Letcher County Water and Sewer District. High levels of iron in the mine water make it unsuitable for pumping water into the creek at Craft’s Colly, said Robert W. Ware, assistant director of the Kentucky Division of Water. He said the division is also concerned about the high acidity of the mine water.

A committee named by the Letcher County Board of Education will begin looking for a site for a new central school and may hire a consultant if necessary to evaluate sites.

Gasoline prices are now at their highest point since September of 1997, increasing another 2.7 cents per gallon in the last month. AAA’s Fuel Gauge Report shows self-served unleaded regular gas to be selling for $1.282 per gallon nationwide, only slightly less that the average price of $1.288 reached in September 1997. The price is 22 cents a gallon higher than in September a year ago when the average was $1.057.

A rash of viruses and flu-like illnesses are having a big impact on the attendance rate in the Letcher County School District. The district attendance rate for this school year is a meager 92.15 percent, but is still above the rates of Whitley County and Todd County schools, which were closed because of illness.

More than $111,000 worth of free health care was provided to 599 people who came to a Remote Area Medical Volunteer Corps (RAM) two-day clinic at Jenkins. Coordinator Hettie Adams said 388 volunteers helped make the RAM event a success. In addition to dentists, doctors, and optometrists, the general volunteers helped tell the patients where to go and helped them register and fill out paperwork.

The Letcher County Central High School volleyball team traveled to Somerset to play in the Pulaski County Invitational Tournament. The team lost its first game to Pulaski County, but went on to win its next three games including the championship game of the Silver Division.