A posse forms in Letcher County 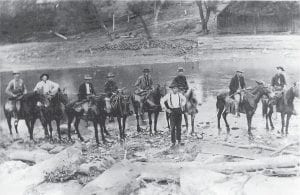 These nine Letcher County men were summoned — perhaps by the Letcher County Sheriff ’s Office — sometime in the early 1900’s to form a posse in Whitesburg. Most probably, the posse was was given the task of conducting raids on illegal distillers of moonshine whiskey. Pictured, with most of them holding a rifle, were (from left) F.M. Blair, Boaz Adkins, D.J. Cox, Logan Morgan, Charlie Hogg, Sam Collins (standing), Cott Polly, E.L. Baker, and Butler Mullins. This photograph was taken at a ford in the North Fork of the Kentucky River in Whitesburg, near where the old Alene Theatre building (now known as Riverside Apartments) is located.

A fight over a dinner bucket resulted in a mine foreman being shot and critically wounded at the Roxana Coal Company mining operation at Kingscreek. Mine foreman Stephen G. Raleigh, 45, was shot in the stomach area by Launsford Fields, a much younger man, after Fields became angry after Raleigh jokingly “tied” Fields’s dinner bucket to a bush. It is said that Fields took out a pistol and placed it on his lap, after which Raleigh ordered him to put the gun away. Instead, Fields shot Raleigh in the side. The bullet landed in Raleigh’s opposite hip. He is being treated at the Seco Hospital. Fields ran from the scene after the shooting, but surrendered to sheriff ’s deputies in Whitesburg late last night (Wednesday).

The Dave Day Farm, located near Roxana Coal Company at Kingscreek, will be divided into building lots and sold at auction on Saturday, October 26. The Norman Realty Company of Whitesburg is handling the sale.

Mrs. Alpha F. Hart is the winner of a brand-new Pontiac Sedan awarded to the person who sold the most new subscriptions to The Mountain Eagle during a sixweek contest that ended October 12. The subscription campaign added 2,600 new subscribers to The Eagle’s mailing list.

A distance of nine miles and two hills will be eliminated from the Hot Spot-to- Whitesburg road after present construction is completed. The road is seen as a link between Whitesburg and Blackey. The new road will go from Hot Spot to UZ and then to Dry Fork, where it will connect with the Whitesburg road. At present, the route to Hot Spot [Premium] is over Sandlick Hill, a distance of about 16 miles. The new road will shorten the route to about seven miles.

The City of Whitesburg last week became the 120th of Kentucky 147 cities of the first class to authorize the Kentucky State Police to exercise their powers within city boundaries. Under law, state police cannot operate in cities of the first five classes (1,000 residents or more) unless the city adopts an ordinance granting the state powers equal to those of its local police officers.

Jordan Niece of Thornton was sentenced to five years on prison after being convicted late last week on manslaughter charges in connection with the October 30, 1948 death of 13-year-old James Henry “Jimmy” Finchum at Mayking. The child was struck by Niece’s vehicle while he was returning home from an afternoon visit to a neighbor’s home to decorate a jack-olantern for Halloween.

The retrial of Jody P. Adams, the Letcher County man charged with murdering Howard Polly on Easter Sunday in 1948, will be held next week in Knott County. Adams was convicted here in July and sentenced to life in prison, but the conviction was overturned because jurors had become separated before a verdict was returned.

The 25-day-old coal strike continued this week after a breakdown in talks between United Mine Workers of America President John L. Lewis and coal operators. The miners are seeking more pay, fewer hours, and higher operator payments into the union’s pension and welfare fund.

Letcher Circuit Judge Sam Ward on Wednesday ordered quashed an indictment charging Robert Harris, 54, of Payne Gap, with murder. Harris was indicted by the Letcher County Grand Jury earlier this week in connection with the shooting death of his son-in-law, Columbus Reed, 32, also of Payne Gap. Reed was killed near Payne Gap on September 26. Harris, who is charged with murder, said he shot Reed in self-defense after Reed broke down the door to his home.

Fleming-Neon and Jenkins were victorious over the weekend in high school football, while Whitesburg played to a draw. Fleming-Neon defeated Paintsville, 22-0, Jenkins beat Prestonsburg, 18-7, and Whitesburg tied with Hazard, 13-13.

Porky Polly, the 192-pound right end for the Whitesburg Yellowjackets, was a guest of University of Kentucky head football coach Paul “Bear” Bryant and his staff at the UK vs. Georgia game in Lexington last Saturday night. Polly, the captain of the WHS team, sat on the Kentucky bench during the game.

The first symptoms of oil fever began to appear in Letcher County this week, with news that a firm drilling for natural gas struck a heavy flow of oil near Democrat. Reports said the flow of oil from the well, drilled by Kentucky-West Virginia Gas Company, was so heavy that drillers had trouble plugging the well.

Shirley Maggard has been elected homecoming queen for the 1959-60 senior class at Whitesburg High School.

Roger Kincer rushed for three touchdowns to lead the Whitesburg Yellowjackets past the Jenkins Cavaliers, 33-0.

The coal industry is enjoying the greatest boom in several decades — but the boom apparently is not sufficient to keep up with the nation’s boom in the demand for more energy. Kentucky Power Co. has filed two suits to compel delivery of coal to its giant new plant on the Big Sandy River, and coal operators and electrical producers are charging that a shortage of railroad cars is slowing production and shipment of coal.

The National Audubon Society has called upon Bethlehem Steel Corp. to reconsider its plans to strip mine large areas of Letcher County and eastern Kentucky. Noting that Bethlehem plans to clear-cut its land and strip mine it on three levels, Audubon Society President Dr. Elvis J. Stahr wrote to Bethlehem President S.S. Cort, “The terrain being very steep, the results can be nothing short of catastrophic for the land and every plant and creature on it.”

Technical Sgt. Felix O. Venters, son of Mrs. Belvia J. Bentley of Neon, is on duty at Cam Ranh Bay AFB, Vietnam. The sergeant is a 1956 graduate of Fleming-Neon High School. His wife is the former Wanda Woods. The couple have two children, Cleta and Felix Jr.

Letcher Fiscal Court voted unanimously for the county to take part in the National Flood Insurance Program, thereby putting a multi-million dollar federally-funded water and sewer project back on track. The $3 million Housing and Urban Development project is for water and sewer facilities and housing renovation in the upper end of Letcher County.

Test of a new community siren installed at the Neon fire station will be conducted about 7:30 p.m. today. The siren is a civil defense type that was bought with half Neon Fire Department funds and half Disaster and Emergency Services Funds. The siren cost about $4,300. Three automatic cycles will be tested today. After three 3-second short test bursts, there will be a pause and then the full automatic fire signal cycle will be sounded. The signal will be used to notify the public of emergency conditions such as flash flooding or tornadoes.

“The beautiful month of October is here, and the rainbow-colored tree leaves are beginning to fall,” writes McRoberts correspondent Madelyn Combs. “October is also the month to see big round pumpkins for sale along the road in preparation for decoration for Halloween.”

A three-pound bag of Red or Golden Delicious apples costs 79 cents at Foodtown Supermarket in Whitesburg. Vine ripened tomatoes are 49 cents a pound.

Letcher County should build rural water and sewer lines throughout the county within the next five years, a study by the Department of Local Government of water and sewer needs says. The study breaks Kentucky counties into sections and lists services needed in each section. The Letcher County survey has 15 sections, including an already proposed $2.1 million water project in Whitesburg and a $2 million sewer project in Jenkins on which bids are scheduled to be taken this month. Other projects in the needs survey are water and sewer lines throughout the county.

Members of Doermann Presbyterian Church at Blackey will celebrate the 64th anniversary of the present church building on October 15.

The visiting Whitesburg Yellowjackets won their third straight game with a 42-0 victory over Betsy Layne. Whitesburg is now 5-2 overall and 2-2 within the district.

Sarah Hayes, daughter of Mr. and Mrs. Haskew Hayes, and William Bledsoe, son of Pamela Brown of Elkins Branch and Will Bledsoe of Cumberland, have been chosen for the University of Kentucky cheerleading squad. Both were members of the Whitesburg High School varsity cheerleading squad.

Formal sentencing will be held Nov. 10 for Delania Hylton Fields, who was convicted last week of first-degree manslaughter in the suffocation death of her newborn daughter. A Letcher Circuit jury deliberated evidence for about six hours Friday before determining that Fields intentionally caused the death of her daughter by placing the infant inside three plastic garbage bags and shutting off her air supply.

Some former Golden Oak Mining Co. employees report receiving their first unemployment checks on Friday, but the workers who walked out when the company cut pay by 10 percent were still waiting. Some miners who were part of the walkout got letters Monday saying their benefits were denied for the first week they applied, but the letter did not make clear whether the other benefits were approved. After workers refused to enter the mines on Sept. 13, the company ordered the remaining workers to go home, but even workers who tried to work said they never received a layoff slip.

“We are enjoying the computer classes at Whitesburg, along with the other class members,” writes Cowan correspondent Elsie Banks. “It is more interesting as we learn more about it … It is all new to me. This is the computer age. For the youngest generation, they could hardly get a job without some computer knowledge.”

The Jenkins City Council declined this week to vote on a proposal that would enable qualifying restaurants and hotels to sell alcoholic beverages. A motion to adopt an ordinance that would enable Jenkins to become the 23rd Kentucky city with “limited” alcohol sales died after not being seconded at the council’s meeting.

Columnist Ike Adams, the human charged with passing on the forecast of the National Association of Woolly Worm Winter Weather Watchers, says the woolly worms are saying snow — and lots of it — with the first snowfall around Thanksgiving.

Police say thefts and burglaries are on the rise in Letcher County and are urging residents to take caution. At least 12 home burglaries have been reported in various parts of the county recently, with the majority of complaints coming from KY 7 North, Millstone, Thornton and KY 15.