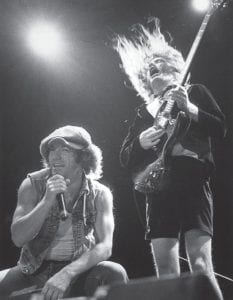 First Top 40 hit boosts AC/DC: On October 25, 1980, the Australian hard rock band AC/ DC earned their first pop Top 40 hit with “You Shook Me All Night Long.” As The History Channel points out, “AC/ DC would never have another single as popular as ‘You Shook Me All Night Long,’ but the group’s ongoing ability to sell full-length rock albums — even in an era when digital downloads have decimated album sales across all genres— is utterly without parallel.” … According to the Recording Industry Association of America, AC/DC rank as the 10th-highest selling recording artists of all time with 71 million albums sold — 30 million fewer than Led Zeppelin, but roughly five million more than both the Rolling Stones and Aerosmith and nearly 15 million more than both Metallica and Van Halen. Pictured above, AC/DC vocalist Brian Young and lead guitarist Angus Young perform in the early 1980’s. (AP Photo)

An angry crowd of people at Burdine on Monday forced two Jenkins school officials to admit five children to the Burdine School after the children had been put out because their parents didn’t pay tuition. The two officials, Superintendent C.V. Snapp and Attendance Officer Homer C. Davis, were roughed up by the crowd of about 200. The five students in question are the children of Elmer Hunt, an unemployed miner who was ordered to pay tuition because he lives outside the Jenkins school district.

The White House says President Truman will intervene if the nation’s twin coal and steel strikes are not settled by the weekend.

The murder trial of Fess Polly has ended in a hung jury and will be tried again in the January term of Letcher Circuit Court. Polly is charged in the slaying of a 14-year-old Linefork boy who was shot after he ran up onto Polly’s porch to escape several barking dogs. Polly told authorities he fired a shotgun blast through the door of his home after there was no response to his call to come inside. The blast struck young Frank Cornett in the head. He died two hours later.

The Whitesburg Athletic Association is working on plans to build a football stadium.

A Letcher Circuit Court Jury has acquitted Letcher County Constable Jody P. Adams in the Easter 1948 shooting death of Howard Polly. The acquittal came at the end of Adams’s second trial, which ended last Thursday afternoon. Adams had been convicted of the crime in July and given a life sentence, but the state Court of Appeals ordered a new trial after jurors became separated before that verdict was announced. Polly, a 46-year-old strip-mine operator, and Adams exchanged gunfire at the Sawdust Junction Inn. Mrs. Hester Cornett, who said she was dancing with Polly at the Inn, testified that Adams walked in and fired the first shot. Adams claimed that Polly fired first.

A Letcher Circuit Court jury was seated Wednesday to hear evidence in the trial of Leonard Cornett, a Linefork man charged in the September 16 slaying of Claude Holcomb, 30. Cornett is accused of fatally shooting Holcomb at a moonshine still near the Harlan County line. The two were fighting over which man owned a small amount of whiskey.

Funeral services were held in Blackey this week for Clifton C. Cole, a well-known blind merchant who ran a candy and soft drink stand in the Letcher County Courthouse in Whitesburg. Cole, 65, died unexpectedly at his Blackey home on Monday.

In Letcher County football action over the weekend, the Whitesburg Yellowjackets defeated the Jenkins Cavaliers, 60 to 18, and the Fleming-Neon Pirates beat Pikeville High School, 26 to 13.

The Fleming-Neon Pirates and Whitesburg Yellowjackets will meet on the Whitesburg field Friday to determine this year’s champion of the Sandy Valley Conference. The Pirates enter the game with a won-loss record of 7-1. The Yellowjackets have a record of 6-0-1.

“Blood On The Moon,” starring Robert Mitchum and Barbara Bel Geddes, will show at the Haymond Theatre in Cromona on October 30-31.

Roland Price, chairman of the Letcher County Democratic Party, today (Thursday) named Whitesburg attorney Harry M. Caudill as the party’s candidate for state representative in the November 3 election. Price made the appointment shortly after learning of the death of previous nominee Hillard Kincer, who died around 1:30 p.m. today after suffering a heart attack. Kincer was 52. Kincer, the incumbent, was elected to the General Assembly in 1957. He was a partner in Kincer Hardware Company in Neon.

An opinion from the state attorney general’s office that states paper ballots must be used in city elections will affect Fleming, Jenkins, Neon and Whitesburg in the November 3 election.

A party at home celebrated the second birthday of Jennifer Jean Combs, daughter of Forrester and Madge Combs of Whitesburg. Jennifer’s brother, Jerold, assisted in entertaining the guests.

Buddy Fields, senior speedster at Morehead College, is one of the main cogs in the Eagles’ powerful ground attack this season, reports Lee Mueller, a writer for Morehead’s student paper. Mueller also points out that Fields, a multi-sport star during his days at Whitesburg High School, is one of the “very few” married athletes on Morehead’s campus.

Kentucky Highway Commissioner Eugene Goss says the state is going ahead with plans to tunnel through Pine Mountain for a new U.S. 119 route, and will consider the possibility of a Pine Mountain tunnel for U.S. 23 at Jenkins.

Daylight Time will give way to Standard Time for another six months at 2 a.m. on October 26, so turn your timepiece back one hour before you retire on Saturday if you want to be “on time” when you arise on Sunday.

Letcher County Sheriff Maynard Hogg says his office has been swamped with calls concerning a mysterious figure reportedly seen throughout the county. More than 150 calls have been received. Some reports were of a figure at a window, usually a hand. Some described him as a robber, some as a thief, others as a murderer, or a rapist. None of those who had telephoned had seen the mysterious stranger firsthand but reported that someone had told them they had seen it. Despite all the rumors or reports, no one came in with a report of an actual murder, rape or robbery.

The Appalachian Mountain Festival will be held at the Blackey Community Center Oct. 25-26. Admission is $1 for adults and 50 cents for children.

Former County Judge Estill Blair scored an apparent victory this week when a special Letcher County Grand Jury completed a look into the four-year Blair administration and returned no indictments. The grand jury did, however, condemn the handling of county financial records, saying the lack of records made the jury’s job of investigating “next to impossible.”

A final report on Jenkins’ fatal water tank rupture, which sent 300,000 gallons of water rushing from a mountaintop site July 15, should be presented to Mayor Jesse Bates, the city council and the water and sewer commission within a month, an engineer investigating the accident said. The accident killed an elderly doctor and did thousands of dollars worth of damage.

“Prophecy The Monster Movie” will be shown Friday, Saturday and Sunday at the Alene Theatre in Whitesburg.

Gov. Wallace Wilkinson has asked President Bush to declare a disaster area of Letcher and nine other counties as a result of last Tuesday’s flooding. The flood was the worst in memory for some Letcher Countians — bigger even than the legendary ’57 flood — and the water came faster. Fleming-Neon was hit hardest when streams rose to six feet deep and more in the streets, and Solomon Creek ran waist deep on Solomon Road in Whitesburg. Number One Bottom in Jenkins was flooded, and slides and high water damaged homes and blocked roads from Burdine to Millstone to Red Star.

Letcher County native Ray Gish is living in San Francisco, Calif., and writes about his experiences when a massive earthquake hit there last week. He says, “The reports of our death have been greatly exaggerated. The most expensive natural disaster in our nation’s history has left no one here untouched, but not everyone is suffering. Our shared brush with death has brought a new and stronger sense of community to the Bay Area.”

Josephine D’Amato Richardson of Whitesburg is the new chairperson of the Kentucky Arts Council. Gov. Wallace Wilkinson named her to the office last week.

Mountain Motor Speedway owner and promoter Lucian Hall announced this week that the Isom racetrack has closed for the season and is for sale after several disappointing crowds and a very bad season.

For the second time in as many years, the Whitesburg Yellowjackets will participate in the Class AA football playoffs. The ’Jackets won 26-7 over Leslie County to reach the playoffs.

Delania Fields was sentenced Monday to 20 years in prison for the killing of her newborn baby in July 1988. Fields, a former bank manager, was found guilty October 1 of first-degree manslaughter.

Construction is expected to begin in March on a $5 million addition to Southeast Kentucky Community and Technical College’s Whitesburg Campus. The new twostory building is planned to be built on the west end of the college’s bookstore, which is the former site of the Letcher County Board of Education’s school bus garage.

“Bats” and “Double Jeopardy” are playing at the Whitesburg Cinema this week.

October is National Breast Cancer Awareness Month, and the C-section of The Mountain Eagle is printed on a pink background this week. The 10-page section emphasizes breast cancer awareness, from the risks and myths of the disease to lowering your risk of breast cancer.

Now here’s a tip!SPEAKING OF SOAPSHow to fight boredom