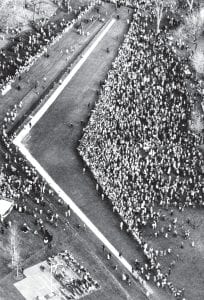 Uncle Tep Combs died last Saturday after falling from a loft inside his barn at Craft’s Colly. His wife, Aunt Sarah Combs, died five days before his accident.

Reports from the “Bullhole” on Pine Mountain state that all defeated political candidates who were sent there are now safe and sound. “It ‘humbleth’ the pride of any man to be sent to this awfully disgusting hole, but does not injure in the least a man’s standing among his friends,” writes Mountain Eagle editor Nehemiah M. Webb.

The high school football teams from Jenkins and Whitesburg played to a scoreless tie in a game played at Jenkins last Friday. The teams also tied for first downs made in the game, with four. Jenkins had the two best chances of scoring during the game, one of which ended on Whitesburg’s 12-yard line after an end run with a series of lateral passes resulted in a fumble.

Salana Fields, a 50-year-old farmer from Kingdom Come, died in the Seco hospital Tuesday from injuries he suffered in an accident at the Polly & Ison Sawmill at Elsiecoal. He was the father-in-law of Mrs. Chester Fields, who drowned after being washed away in the May 1927 flood.

The Carbon Glow School now has an enrollment of 142 students.

More than 800 students from Whitesburg High School and Whitesburg Grade School donned white “caps of peace” on Monday before marching up Main Street in observance of Armistice Day. “Just 11 years ago last Monday, the great storm of the World War broke and the greatest army ever assembled in the world stopped the German’s march of slaughter,” The Mountain Eagle reports about the celebration. The newspaper also notes that in addition to it being the 11th celebration of Armistice Day, the students’ march also took place on the 11th hour of the 11th day of the 11th month.

The town of Haymond is busy night and day now, with the coal mines running 24 hours. Every building in the town, which runs for 1-1/2 miles along a concreted federal highway and has more than two miles of concreted sidewalks, is lighted by electricity. In addition to the mines and dwelling houses, Haymond has a large commissary and office, a meat market, a soda fountain, a post office, a barbershop, a pool room, a theater, and a shoe shop.

Three unidentified men held up the watchman at the L&N depot in Whitesburg Wednesday and got away with $24 in cash, the operator’s wristwatch, and a first class mail pouch. The robbery took place about 1 a.m.

Last Thursday when the miners returned to work, Bob Dixon of Blackey began his first shift with the Miniard Coal Company on Leatherwood. He was killed that day by a slate fall. Mr. Dixon is survived by his wife and three small children. He was about 30 years old.

Television came to Letcher County last week. From indications it may be here to stay. Raphael Salyer of the Salyer Radio Company in Whitesburg installed a set at the V.D. Picklesimer cabin on Pine Mountain and he reports that considering the distance, the set has had very good reception. Programs have been picked up from Cincinnati, Louisville and Columbus. The picture is very good, too, Mr. Salyer states.

On Wednesday of this week, Charlie Wright filed a suit in Letcher Circuit Court seeking a recount of votes in the race for County Court Clerk in last Tuesday’s election. The suit asked that all 54 precincts be recounted. In the race for the clerk’s office Mr. Wright received 4,979 votes to 5,033 for his opponent, Troy W. Frazier. Of these votes, Mr. Wright received 11 absentee votes and Mr. Frazier 17. A special judge will preside at the recount, which will start next Tuesday, Nov. 22.

John Hart, 43, of Seco, was killed Monday morning when the truck in which he was riding was struck by a Louisville & Nashville train at the Seco crossing. Hart was a passenger in a delivery truck owned by South East Coal Co., and driven by Dewey Wayne Spears. Spears was seriously injured in the accident. The accident happened at one of the most dangerous railroad crossings within the county — at a point where the motorist’s view of the railroad is blocked by a store building.

PFC William D. Delaney, 23, son of Mr. and Mrs. Ballard Delaney, Burdine, and S-1-c Clayton C. Mullins, son of Corbet Mullins, Dunham, recently participated with the 8th Infantry Division in Exercise Heaven Sent, a field training exercise in Germany. Delaney entered the Army in June, 1958, and has been overseas since January, 1959. A 1954 graduate of Jenkins High School, Delaney attended Union College in Barbourville. Sgt. Mullins entered the Army in 1946 and has been overseas since October 1958.

Ed Moore’s Whitesburg Yellowjackets finished a very successful season by soundly trouncing Black Star, 26 to 0, in the Coal Bowl. Despite the absence of state scoring champ, Roger Kincer, the Jackets won comparatively easily — proving the worth of the EKMC.

Kentucky moved three steps closer to a three percent retail sales tax this week. Recommendation for such a tax came from three groups, the Eastern Kentucky Regional Planning Commission, the Kentucky Chamber of Commerce, and the Kentucky Farm Bureau Federation.

Word was received this week of the death in Vietnam of Andrew Sexton, 20, son of Mr. and Mrs. Archie Sexton of Sergent. He was wounded Nov. 7 and died Nov. 8. Sexton, who joined the Army last March, had been in Vietnam two months.

State Reclamation Director Elmore Grim personally delivered an order halting strip mining at Millstone by Bethlehem. The order directs Bethlehem to halt four violations of state law governing strip mines. 1. Failure to construct silt basins. 2. Allowing debris to slide off the permit area. 3. Stripping within 100 feet of a stream. 4. Creating a wider strip mine bench than allowed in relation to the steepness of the slope.

Film showing the Bethlehem Steel Corp. strip mining practices was seized and the life of Mountain Eagle photographer Jean Martin was threatened this week. Miss Martin visited the Bethlehem Millstone strip mine and had taken a number of photos when she was accosted by three men. They seized the film and threatened her life should she take any more photos. Marshall Post, director of public relations for Bethlehem, said he could not believe any Bethlehem employees were involved in the incident, and that Eagle photographers are free to take pictures of any of its operations.

The question of who will be the next mayor of Jenkins is still unresolved. The Letcher County Election Commission did a recount over the weekend that showed the present mayor, Percy Elkins, as the winner by two votes. His write-in opponent, former mayor W.G. (Bill) Terrill, has requested a second recount.

The old Whitesburg High School building on School Hill has been closed because of damage apparently caused by blasting connected with the nearby highway by-pass construction. Other school buildings may also be affected by the blasting. About 150 high school students and teachers were told to leave the building last Thursday after it was determined that the structure had become potentially unsafe. Temporary arrangements have been made to accommodate high school students in the Science Building.

In the election for governor, Democrat John Young Brown Jr. carried Letcher County and the rest of Kentucky Tuesday for a smashing victory over former Republican Governor Louie B. Nunn.

The City of Jenkins will sell the vacant lot beside City Hall to Greer Development Company of Lexington. The vote came three days after the Rite Aid drugstore chain, which had been Greer’s main hope for an anchor store, bought property on Main Street. Councilman Wayne Fleming, who had opposed Greer’s offers in the past, acknowledged Rite Aid is on the way to Jenkins with or without the council’s vote of approval, and said he now sees Greer’s offer as chance for seven or eight more businesses in Jenkins.

Whitesburg firefighters spent Monday afternoon fighting a forest fire at Solomon, after a resident there lost control of a brush fire. Fire Chief Roy Benge said a forestry worker was citing the man for burning before 4:30 p.m. when the fire jumped into the nearby woods. Eli Banks, the resident who started the fire, said he had raked a 100-foot ring around the brush-pile before he lit it, but the wind blew a spark into dry leaves just outside the ring. Banks said he was unaware of the ban on burning before 4:30 p.m.

Paintings by Letcher County artists David Lucas of Cromona and Jeff Chapman-Crane of Eolia are featured in an exhibit of works by 43 Kentucky artists at the Museum of Art in Quito, Ecuador.

“Visitors continue to drop by our new nursing home, the Letcher Manor,” writes Jeremiah correspondent Hassie Breeding Helton. “They just have to be proud that we have it.”

The Letcher Fiscal Court approved the final reading of an ordinance that will require residents to connect to public sewers, if and when they become available, if it is feasible for them to do so and if they do not have a working septic system. Jim Tolliver, manager of the Letcher County Water and Sewer District, said the health department and the water and sewer district’s engineers will decide whether a septic system is working and whether it is feasible for the owner to tie into the nearest sewer line.

The first week of a new electronic Food Stamp program went off with some problems, but it may be too soon to tell how well the Food Stamp card will work over the long haul. Beginning Nov. 1, paper food coupons in southeastern Kentucky were replaced with a debit card that is credited with a recipient’s Food Stamp allocation. The upside for officials worried about Food Stamp fraud is that the cards cut out the need for change to go back to customers and make it harder for recipients to buy items other than food. The startup has had some problems. Some recipients cut up the new cards under the mistaken belief they were unsolicited credit cards, and Food Stamp recipients have had to stop shopping in Virginia stores because the cards are not accepted there.

“The House on Haunted Hill”, “Pokemon: The First Movie”, and “Walt Disney’s Toy Story 2” are playing at Whitesburg Cinema.

A motion by convicted murderer Benny Lee Hodge to have his death sentence vacated because of ineffective assistance of council has been denied by Special Letcher Circuit Court Judge Eddy Coleman. Hodge, 58, of Lake City, Tenn., and Roger Dale Epperson, 59, of Jeff in Perry County, were sentenced to death in June 1986 for the murder of Tammy Dee Acker of Fleming-Neon. The murder occurred when Hodge, Epperson and Donald Terry Bartley entered the home of her father, Roscoe J. Acker, on the night of August 8, 1985. The three men stabbed Miss Acker to death after choking Dr. Acker unconscious and robbing his bedside safe of $1.9 million.

Whitesburg Appalachian Regional Hospital will hold groundbreaking ceremony for its planned $11 million expansion and renovation project. Included in the project will be a third floor renovation as well as a new wing addition. The renovation will include 20 private rooms, two isolation rooms, updated nursing stations, and a waiting room.

The Letcher County Central High School boys’ and girls’ cross country teams both placed first in the regional meet. The teams now advance to state next Saturday in Lexington. The teams were welcomed back to Whitesburg with a ride on Whitesburg Fire Department trucks, followed by several parents honking their horns behind them.