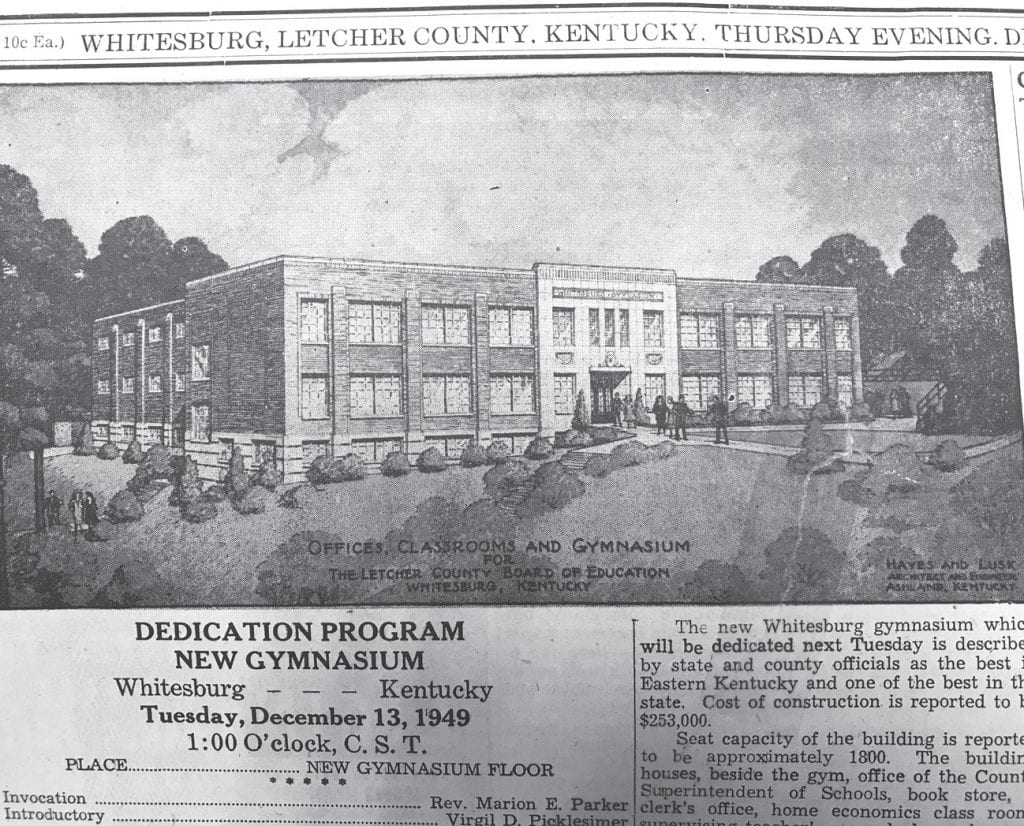 New gymnasium was state of the art in 1949

Seventy years ago this week, the front page of the December 6, 1949 edition of The Mountain Eagle was dominated by the news of a dedication ceremony being held to mark the official opening of the new Whitesburg High School gymnasium. The building, which remains structurally sound where it sits on a hillside above the East End of Main Street, is now owned by Mountain Comprehensive Health Corporation and was built at a cost of $253,000. The dedication ceremony was held at 1 p.m. on Tuesday, December 13, 1949 on the gym’s shiny wooden floor. When it opened, the gym had a seating capacity of 1,800. The two-story structure was built to also house the county superintendent’s office, a bookstore, and a large home economics classroom/lab. It also featured new $460 Fair Play scoreboard that automatically kept time and sounded a horn when a period of play ended.

George Combs of Jenkins, a truck mine operator, has been the first to confirm the signing of a new five-day workweek contract with the United Mine Workers. Combs, operator of the Dorton-Elkhorn Coal Company and the Combs Coal Company, said he and 18 others accepted the agreement “because we had a desire to work more than three days a week.”

J.M. Maggard, a 62-year-old sawmill operator, and Lillie Stidham, his 16-year-old fiancée, in a hurry to get married, stopped a minister on Whitesburg’s Main Street Saturday and were married on the spot. An astonished crowd of 20 to 30 shoppers watched the couple speak their marriage vows in front of the Kentucky Theatre. The ceremony was performed by Rev. Thomas R. Collier of Thornton.

The Pine Mountain Resort Hotel will undergo alterations and remodeling in the near future. Five new rooms will be added and the front of the hotel will be completely remodeled. Brick veneer will be added to the outside of the building, and the main dining room will be enlarged.

The Fleming-Neon Pirates defeated the Stuart Robinson Eagles on Dec. 10 by a score of 39 to 35. The Pirates, after taking a beating from Wayland earlier in the week, came back to defeat the Eagles in a good hard game all the way.

“Task Force”, starring Gary Cooper and Jane Wyatt, will play Dec. 18 and 19 at the Kentucky Theatre. The film was five years in the making and includes secret Navy combat films.

Union and coal management negotiators will meet Saturday in Pikeville in a new attempt to settle the 9-month-old coal strike. This time, however, a major stumbling block to agreement is missing from the union demands. It is insistence on the protective wage clause. The clause prohibits union operators from processing coal mined by men who are not union miners.

The new road being planned to connect Eastern Kentucky with the rest of the state definitely will include Letcher County, Gov. Bert T. Combs has told Sen. Archie Craft and Rep. Harry M. Caudill. News stories from Frankfort concerning the road said it would run to Hazard and Prestonsburg but made no mention of rebuilding Kentucky 15 from Hazard to Whitesburg.

Pfc. Burtis Brashear, who has been stationed at Iceland for the past year, is now on leave and with his parents, Mr. and Mrs. Ed Brashear. He is a 1958 graduate of Jenkins High School. When his leave is up, he goes to Fort Benning, Ga.

W.A. “Tony” Boyle was the overwhelming victor this week in his race for re-election as president of the United Mine Workers of America. Boyle defeated Joseph A. Yablonski, considered the first serious challenger in more than 20 years.

The future of the War on Poverty in eastern Kentucky and the rest of the nation is in doubt this week as governors and the Office of Economic Opportunity grapple for control of the program. Congressional supporters of the OEO, the federal agency which runs the anti-poverty program, were able to stall off an attempt by members of the House of Representatives to turn over control of the anti-poverty effort to governors.

Letcher County pupils are receiving the full benefits of funds appropriated by Congress last year to improve the school lunch program, school officials said. A spokesman said more than half the county school pupils who eat in school lunchrooms in consolidated schools are fed without charge to them or their families. In one- or two-room schools, no child pays more than 10 cents for his lunch, and most pupils are fed free.

The Jenkins Cavaliers won one and lost one game this past week. The victory came on the home court by a score of 59-55 over the Virgie Eagles. The loss was to the Pound (Va.) Wildcats, 71-76.

Neither the county judge nor the magistrates mentioned Letcher County’s senior citizens program during the Letcher Fiscal Court meeting, allowing the program, as it now exists, to die quietly unless volunteer workers revive it. At its October meeting, the debt-plagued court had approved the senior citizens’ program’s monthly $7,000-plus payroll through December. A salary reserve was anticipated for covering some employees’ pay, but that reserve has been sliced away by incoming bills.

The Letcher Fiscal Court met Friday in special called session without any mention of the controversial flood insurance proposal which has been batted around since September. Although more than 100 people had gathered to witness the court’s final vote on the question of whether Letcher County would adopt the federal flood insurance program, the magistrates did not mention the proposal.

Blue Diamond Coal Co. has agreed to hire one female for every three males hired at beginning miner levels in its eastern Kentucky mines until females have filled 20 percent of the beginning miner workforce. The agreement stems from complaints by two women who were allegedly denied employment at Blue Diamond because they were female.

“My electricity was off one morning last week when it was five degrees above zero,” writes Isom correspondent Kathryn Collins. . . . “There was no school in Letcher County because the electricity was off, but some of the children had already got on the bus and gone to school when they decided to call off school, and the buses had to take them back home.”

Injuries suffered in a mining-car accident at Blue Diamond Scotia Mine in Letcher County claimed the life of Arthur William Foutch, 38, a native of Cumberland. Foutch was repairing a shuttle car Saturday when another car struck him from behind and pinned him against the car on which he was working. Foutch is survived by his wife, his mother and a stepson.

Former Letcher County resident Belinda Mason Carden is featured in a three-page spread in the December 11 issue of People magazine. She is a member of the National Commission on AIDS, a disease which she contracted as a result of contaminated blood received in a transmission during childbirth three years ago. She is the daughter of State Rep. Paul Mason of Whitesburg and of Barbara McInytre.

On Dec. 31, the Mary Jo Wolfe Memorial Library in Jenkins will move out of the building it has occupied since 1963. Gary Royalty, the owner of the building, plans to remodel it. Contrary to rumors circulating around the city, the library won’t close, said Jeanette Ladd, chairwoman of the Letcher County Library Board. “We would never take the library out of Jenkins because it’s one of the busiest libraries we have.”

Fleming-Neon rallied in the second half to win at Elkhorn City 65-61. The Cougars jumped out to a 18-8 lead in the first quarter, but Fleming-Neon outscored the Cougars 20-9 in the third quarter.

Dr. Dennis A. Sandlin, a Mountain Comprehensive Health Corp. physician, was shot and killed at point-blank range Tuesday after an altercation with a patient who had gone to Leatherwood-Blackey Medical Clinic seeking narcotics. John Combs was arrested a short time later at his home at Redfox. Combs had gone to the clinic seeking pain pills and became angry when Dr. Sandlin asked him to submit to an urinalysis. Combs then left the clinic and returned later, armed with a handgun.

The Jenkins City Council heard bad news on the topic of water leaks. Water Department Superintendent James “Bo” Hopkins told the council the city produced 15,395,000 gallons of water, and only sold 4,102,000 gallons for a difference of 11,293,000 gallons or 73 percent potential water loss. Only 3,234,000 gallons could be accounted for, including 1,044,00 from line breaks.

“We sure had a pretty snow day last Saturday,” writes Jeremiah correspondent Delana Banks. “The snow hung on the tree limbs and looked so Christmasy!”

The annual Breakfast with Santa will be held at the Hemphill Community Center on December 12. Gravy, biscuits, scrambled eggs, sausage, bacon, bologna, chocolate gravy and drinks will be served.