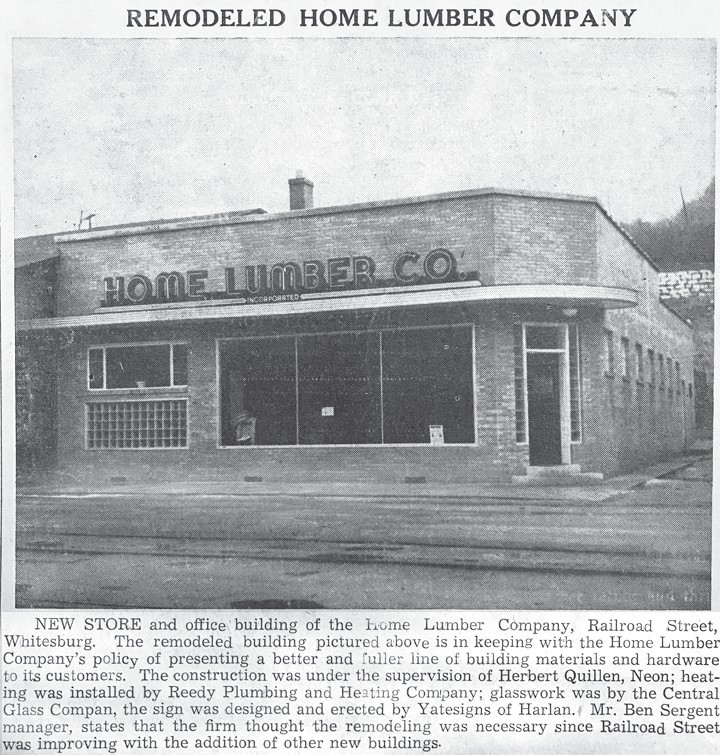 The image above was taken from the front page of the January 19, 1950 edition of The Mountain Eagle and shows the then-newly remodeled Home Lumber Company located on the East End of Whitesburg. The building, located next door to the present Whitesburg City Hall, is now used for retail and office purposes.

An 18-year-old milk truck driver was killed and two others were seriously injured Saturday when the truck collided with a passenger bus on the road at Potter’s Fork, above Haymond. Jenkins Dairy driver Albert Cox died after the truck he was driving collided with a bus headed to Whitesburg from Pikeville. Lester Davis, 12, of Jenkins and a passenger in the truck, was expected to survive his injuries. Mrs. Selbert Poole of Winchester, a passenger on the bus, was thrown through the windshield of the bus. Reportedly, Cox was driving the truck toward Jenkins at a high-speed when he had to swerve left to keep from hitting another vehicle parked on the side of the highway. Failing to see the bus, Cox apparently steered his vehicle into the path of the bus, hitting it head-on.

Elsiecoal residents hope the coalmines in that community start back to work soon.

Nearly three years after the flood of 1927, prospects are “very gloomy” that the Kentucky General Assembly will appropriate money needed to repair Letcher County roads and bridges damaged or destroyed by those high waters. That is the report of Letcher County Attorney Astor Hogg, who returned to Whitesburg this week from Frankfort, where he met with representatives of the state highway commission.

Bruce Kegan of Jenkins survived a close brush with serious injury or even death when he tumbled out of a window on the top floor of the Masonic Hall in Jenkins. Kegan was reaching out the window to get his hat that someone had thrown up to him when he lost his balance and fell to the concrete below. Although he left the window head first, he fell into some vines and somehow landed on the concrete feet-first.

Archie Craft of Whitesburg has passed the examination to become a licensed funeral director.

FBI director Hoover says a ring of dictatorships planned to overthrow the United States government. He identified the ring as the Christian Front and reported that 18 of its members had been arrested on charges of “conspiracy to create a revolution and overthrow the government to set up a dictatorship.”

The Civilian Conservation Corps voluntary public work relief program should last until at least 1990, says Robert Fechner, who has served as the CCC’s national administrator since its beginning in 1933. “The Mountain Eagle has always clung to the notion that the CCC is one of the greatest in the entire New Deal program, and while we still think it will go on with its present strength it is well to watch it less Congress does something this year to interfere with it,” the newspaper says in a front-page commentary by editor Nehemiah M. Webb. The CCC has built many roads and bridges and public buildings in Letcher County.

“The most potent influence in modern life in this country today, as well as in Europe, is propaganda,” a Mountain Eagle editorial warns.

Letcher County recorded 11 cases of polio during 1949, the most of all counties in the Kentucky River district, which had a total of 38 cases.

A Linefork man has been sentenced to two years in prison after being found guilty in the January 12, 1949 slaying of an 11-year-old boy. Fess Polly, 37, a Linefork timber operator, was found guilty of voluntary manslaughter Tuesday in Letcher Circuit Court. Polly testified that the boy, Frank Cornett, knocked at his door that night and did not answer when Polly asked, “Who is there?” Polly said he then fired through the door.

Harry B. Crane, general superintendent of the Elkhorn Coal Corporation at Fleming, died this week in Fort Lauderdale, Florida. He was 65. Mr. Crane, who had been superintendent for Elkhorn for 25 years, went to Florida shortly after to Christmas to spend the winter. Funeral services will be held January 21 at the Fleming Baptist Church here.

United Mine Workers President John L. Lewis has ordered 89,000 striking soft coal miners to go back to work as the National Labor Relations Board this week prepared to take action against the union. In Letcher County, several Consolidation Coal Company mines were idle this week as were most of the county’s smaller operations.

The Neon-Fleming Lions Club held its first Ladies Night of 1950 on January 10, with a dinner at Tucker’s Café in Neon. Seventy people were present.

The change in the governor’s chair in Frankfort apparently has cost Letcher County 14 jobs and nine road projects. Hassell Stamper, county maintenance foreman for the state garage here, and 13 other men were fired. The nine projects cancelled stretch from Dunham to Ingram’s Creek on roads and bridges traveled by school buses.

There were 776 births and 204 deaths in Letcher County during 1959. Heart disease was the leading killer, as it was blamed for the deaths of 62 county residents. Ten accidents — five in coalmines and five traffic-related — caused a total of 17 deaths here.

Whitesburg Grade School children were enjoyed an unexpected holiday today, and from all indications the break in classes will continue for another 10 days or more. School was dismissed Wednesday afternoon after the building’s furnace failed when a crack developed in the boiler.

A case of third-offense possession of alcoholic beverages for sale in a local option territory against Sam J. Bates was dismissed in Letcher Circuit Court because the court found problems with the search warrant under which the case was made.

All needy children in the state may become eligible for state Medicaid benefits if a suit filed last week by seven Kentucky families against the state Department of Economic Security is upheld by the U.S. District Court. The suit, brought by the Mountain Legal Rights Association, would establish the right of Medicaid benefits to all poor children in Kentucky, regardless of whether their parents are employed full-time.

The Department of Labor has been asked to begin an investigation into the United Mine Workers by Joseph L. Rauh Jr., attorney for slain UMW leader Joseph Yablonski. Yablonski, his wife and his daughter were murdered at their home on December 31, 1969, apparently by “professional gunmen.”

Striking employees of Beth-Elkhorn Coal Corp., one of Letcher County’s largest coal producers, returned to work this week, ending an eight-day walkout. Employees of the company’s Mine 26 at Shelby Gap in Pike County walked off their jobs January 7 in protest against the company taking five sick days and four “floating” vacation days away from employees who had recently returned to work after being laid off since January 1979.

It is up to Letcher Circuit Court to determine whether the City of Whitesburg will be able to annex the areas of Caudilltown, Tunnel Hill and Pine Mountain Junction. In its first meeting of the new decade, the council, by unanimous vote, passed the ordinance annexing the three areas.

The average price of gasoline rose 6 cents a gallon at full-service pumps and 4 cents at self-service pumps in central and eastern Kentucky during the past month. The average cost at full-service stations is $1.11 for regular, $1.16 for premium, $1.15 for no lead and $1.06 for diesel. Self-service prices are $1.04 for regular, $1.11 for premium and $1.07 for no lead.

Because of limited funding, no construction date can be set for the portion of U.S. 119 between Cumberland and Whitesburg, said Transportation Secretary Frank R. Metts. Metts said the 6.8-mile section of the road between Oven Fork and Whitesburg is currently in the design stage. Last fall highway department engineers said the entire stretch of road — considered one of the most dangerous in the state — was under design but difficulties had been encountered because of the geological instability of Pine Mountain.

Kentucky Governor Wallace Wilkinson has included U.S. 23 in his list of projects to be paid for by a proposed $600 million bond issue. Estimates put the cost of building the road from Dorton in Pike County to the Virginia state line at Jenkins in Letcher County at $160 million.

Jenkins sewer rates will increase by more than 50 percent next month to pay off loans for the new sewer treatment plant. Jenkins residents currently pay $12 a month for sewer service for the first 2,000 gallons of water used. The increase will raise the minimum bill to $20.85 per month.

Rockhouse residents are having problems with pipeline construction. Richard Wojciechowski of Elkhorn Branch says contractors building a pipeline there for Equitable Resources are damaging the road in and out of the hollow and are not cleaning up after themselves. Trucks traveling in and out of the hollow have left the one-year-old blacktop cover with mud and the heavy equipment hauled in and out on the trucks has caused the asphalt to break and come apart, he said.

Mrs. Siller Brown celebrated her 90th birthday on January 1, writes Cowan correspondent Elsie C. Banks. “She was a faithful correspondent for The Mountain Eagle for many years and I’m sure they miss her column.”

The Letcher Fiscal Court transferred the last $35,500 budgeted for the senior citizens program into that agency’s account on Monday. County Treasurer Phillip Hampton said that means the department will have to be subsidized from other funds for the remainder of the fiscal year, which ends June 30. The Letcher County Jail is also going over budget. Since the jail is considered an essential service, the court will have to transfer more money to its accounts, putting other services at risk.

American Electric Power is warning about a scam in which men claiming to be AEP employees visited at least one house in Letcher County and asked for money to repair the home’s electric meter box. The company said none of its employees visited the home and said AEP employees do not visit customers’ homes except to read meters unless the customer has asked for someone to come.

Mollie Marie Hughes died January 1 at Jenkins Community Hospital. She was 104 years old and was a retired teacher. She had taught kindergarten in area schools for many years. America Lear Brown died January 2 at her home in Jenkins at the age of 94. She was the widow of William Brown.

“Deuce Bigalow: Male Gigolo” and “The Green Mile” will play this week at Whitesburg Cinema.

Gary Smith, 52, of Isom, was arrested after police found a meth lab in his home. “In Letcher County so far we hadn’t really had a problem with meth but it is starting to creep in and we are making every effort to stop it before it gets worse,” said Letcher County Sheriff Danny Webb.

Even with the number of school days missed because of an H1N1 (swine flu) scare in the fall and snow days this winter, students in Letcher County could still begin their summer break in May. The last day of the 2009-2010 school year for students is still set for May 4.

“When they mention snow, I run to the store and so does everyone else,” writes Whitesburg correspondent Oma Hatton. “The stores were packed with people. It’s a good time for their business.”

Verna and Chester Rayburn will celebrate their 50th wedding anniversary on January 30.