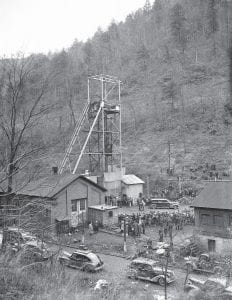 In the January 25, 1940 edition of The Mountain Eagle, then-editor and publisher W.P. Nolan voiced the newspaper’s concerns about coal miner safety in a front-page commentary written days after 92 miners were killed in an explosion in a West Virginia deep mine.

Noting the “suffering and heartache” caused by such disasters, Nolan wrote, “that greater safety measures should be used as never before — more rigid mine inspection and the observance of every safety rule and device.”

Pictured at left is the general scene at the Bartley, West Virginia mine when the first bodies of the victims of the mine disaster were brought to the surface January 13, 1940. The tipple of the mine can be seen on left. An ambulance is backed up to the mine entrance ready to receive the first body. A small crowd gathers around. Mine official asked relatives of the dead miners to remain away from the scene. (AP Photo)

A Seco man was seriously wounded Sunday afternoon when he was shot while trying to serve as peacemaker in an argument between two other men at Millstone. Kimmer Donalds was shot inside the Jot-’Em-Down Store while urging the shooter, Luther Johnson, to quiet down. Officials say Johnson, a proprietor of several liquor stores and former state highway patrol employee, came into the store flourishing a pistol and engaged in a “drunken brawl” before the shooting.

No liquor will be served in the Executive Mansion in Frankfort for the next four years, Governor Keen Johnson said Friday night after serving non-alcoholic fruit drinks to other state officials gathered in the Mansion. Johnson said he is “following the custom” of his predecessor, Gov. A.B. “Happy” Chandler.

Residents of Kentucky, the nation’s greatest whiskey-producing state, are now drinking more moonshine than can be produced, said R.A. Beman, the assistant supervisor of the state’s whiskey tax commission. Beman said Kentucky bootleggers are drawing on moonshiners in Tennessee and West Virginia to help fill the gap in production.

Surplus commodities distributed by the Works Progress Administration (WPA) to 65,889 needy families in Kentucky required 652 for transportation during 1939, or a single train approximately 7-1/2 miles in length. The commodities reached a total of 312,893 individuals in the state last year.

“Since 92 men were trapped and killed in a mine explosion in West Virginia recently we contend that greater safety measures should be used as never before — more rigid mine inspection and the observance of every safety rule and device,” Mountain Eagle editor and publisher W.P. Nolan writes in a front-page commentary. “The suffering and heartache caused from this, one of the greatest of all tragedies and calamities, will be felt down through the ages. Let’s hope it does not happen again.” Officials of the Pond Creek Pocahontas Coal Company at Bartley, W.Va., have announced the recovery of the body of the last of the 92 miners killed in the explosion last Wednesday at the Bartley No. 1 Mine.

Valuable timber is being shipped from Linefork through Harlan County because there is no road outlet tying that section of Letcher County with other Kentucky River areas.

The Works Progress Administration (WPA) library at Rockhouse now has more than 600 books in circulation, just three weeks after it opened.

Effective March 1, a new Kentucky law will require that both parties to a marriage must submit certificates showing they are free of any venereal disease.

Gary Cooper and Susan Hayward stars in “Beau Geste,” showing Sunday and Monday at the Bentley Theatre in Neon. The film “5th Avenue Girl,” starring Ginger Rogers, shows at the Bentley on Wednesday and Thursday.

A Kern’s bread truck driver who has been “missing” since his truck was found abandoned at Pine Mountain Junction near Whitesburg, is now believed to have staged his disappearance to cover up a marital affair. After the wife of driver A.A. Hodges reported him missing after Hodges failed to return from his normal delivery route, a search was begun, retracing his route over Pine Mountain, down into Linefork, back to Whitesburg and then on to Pine Mountain Junction, where is truck was found opposite Ed Williams’s grocery and filling station. Found inside the truck was part of a Kern’s uniform, including a cap, and a flashlight. Scribbled in pencil on the dashboard were the words, “Being robbed. Put me in … KY 738 river.” Investigators soon learned the driver — described as being sober, honest, very much devoted to his wife and two children, and a devout Christian who has preached on several occasions — and a young girl from Linefork had boarded a bus at Pine Mountain Junction for a trip to Jenkins, where they stayed the night at the Recreation Hotel before purchasing two more bus tickets to Pikeville. The search has been called off.

Funeral services were held in Jenkins Wednesday for Captain Harold R. Parks, who was killed last Friday in a parachute jumping accident at Fort Bragg, North Carolina. Captain Parks, 35-year-old son of Mr. and Mrs. O.O. Parks of Jenkins, died of injuries he received when his parachute failed to open after a jump. His wife, four-month old son and a sister also survive.

A Letcher County man has been awarded $500 in a lawsuit he filed against former Sheriff Herman Combs and Deputy Sheriff Argus Cook. The Letcher Circuit Court judgment finds that T.R. Collier of Farraday was falsely arrested last summer by Deputy Cook and Deputy Boyd Caudill, who was not named in the suit.

The Kentucky House of Representatives voted 45 to 12 this week to ask Congress to fund construction of a canal on the Big Sandy River. One opponent of the measure, Simpson County Democrat Roy Steers, described the Big Sandy project as “socialism.”

M.L. Webb of Mayking has announced the proposed development of a large strip mining operation there. He said a Whitesburg construction firm will do the mining.

Gene Autry and Patricia Barry star in “Riders of the Whistling Pines,” showing Friday at the Haymond Theatre at Cromona. Showing at Haymond on Saturday is “In The Navy,” starring Bud Abbott and Lou Costello with the Andrew Sisters. The movie, originally released in 1941, was released last year.

Construction of Boone Motor Company’s new building on Madison Street in Whitesburg is now complete. The company recently acquired a Cadillac dealership in addition to its affiliation with Chevrolet.

A six-mile stretch of road on Linefork has been completed by C.D. Juett Construction Company of Winchester and accepted for maintenance by the Kentucky Department of Highways. The new road runs from Gordon to the Pine Mountain Settlement School, about .3 of a mile from the Harlan County line. It will serve several truck mines in Linefork, as well as Blue Diamond No. 1 Mine at Toner.

Free bus rides are being offered to the Whitesburg Memorial Hospital for patient-beneficiaries covered by the United Mine Workers Welfare Fund. Buses operate to Blackey for the lower end of the county and Jenkins for the upper section.

Fleming-Neon students Anna Laura Caudill and Darrell “Porky” Hall are in Frankfort this week, where Miss Caudill is serving as a page in the state Senate and Mr. Hall is paging in the state House of Representatives.

The Kentucky Conservation Council has asked the state legislature to approve several new laws to regulate strip mining, including a near-ban on stripping in the mountains. The key proposal would prohibit strip mining on any mountain slope of 18 degrees or more. This would have the effect of banning stripping on most Kentucky hillsides.

“Goodbye Columbus” starring Richard Benjamin and Ali McGraw will play this weekend at the Alene Theater in Whitesburg.

Fire destroyed Whitesburg Middle School (the former Whitesburg Elementary School) early Wednesday, injuring a fireman and leaving 360 students without classrooms. School officials are making plans for a “split session” to keep classes active and are looking desperately for some way of getting new buildings constructed. The fire was discovered about 6 a.m. by custodian Bill Lewis. It apparently started in the auditorium balcony. A Whitesburg volunteer firefighter, Chad Back, was taken to the University of Kentucky Medical Center in serious condition after a brick wall fell on him while he was fighting the fire. The cause of the fire is unknown but faulty wiring is suspected.

Letcher County’s road department is operating in the red and must make changes necessary to live within its income, said Al Howell of the Department for Local Government. Howell recommended the county use CETA workers to drive highway trucks and employ sufficient heavy equipment operators to keep the machinery busy working for the state.

The Letcher Fiscal Court defeated a proposal to put Letcher County into the federal flood insurance program. A large part of financing for a huge water, sewer and housing program for the upper end of Letcher County depended on the court’s adoption of the flood program.

About 60 people crowded into the Letcher District Courtroom for a sometimes heated public discussion of the National Flood Insurance Program. At stake is federal aid for residents whose homes were damaged by flooding last October. The county has repeatedly turned down offers to join the NFIP, and government regulations won’t allow flood victims to receive anything other than temporary help unless the county joins the program. Also, county residents cannot buy flood insurance unless the fiscal court joins.

Brenda Hall Howard, a 20-year-old Letcher County woman, has pleaded not guilty to a charge of murdering her infant son. Mrs. Howard is charged with murdering six-month-old Jeffery Neal Howard II by causing him to be struck on the head. Authorities say the infant died of a brain injury he suffered after being struck on the right side of the head.

Dr. George Sullivan and his wife, Linda Bates Sullivan, both of Hindman, were arrested and Fleming-Neon Police Officer Woodrow W. Phillips Jr. of Seco surrendered to federal officials in Lexington. The three are among six persons arrested on federal indictments alleging a combined 656 counts of illegally filling and distributing prescription drugs. Dr. Sullivan last week resigned from a temporary physician’s job. He was indicted on 387 counts. Linda Sullivan, employed as a nursing director at Letcher Manor Nursing Home before her arrest, was indicted on a single count of conspiracy. Phillips was indicted on six counts.

“Cheating Our Children,” a series of articles on problems in financing Kentucky’s schools, appears as a special section in this week’s Mountain Eagle. The series appeared a few weeks ago in the Lexington Herald-Leader, which has offered it to other Kentucky papers.

More than 175 military veterans have signed up to begin receiving medical care under a new partnership between Mountain Comprehensive Health Corp. of Whitesburg and the U.S. Department of Veterans Affairs.

Annie’s Frugal Finery, a new consignment store in West Whitesburg, was destroyed by an electrical fire. Owner Debbie Campbell said she went in the back room and saw smoke. She said she realized there was nothing she could do to extinguish the flames after “the total wall ignited” as she was looking on.

Letcher County may join the Pike County Fiscal Court in a lawsuit against Kentucky Power Co., a division of American Electric Power. The suit charges that Kentucky Power’s negligence in maintaining power line rights-of-way resulted in the power outages that plagued eastern Kentucky during the Christmas holidays and caused thousands of families to spend the holiday in the dark and lose the food in their refrigerators and freezers. The lawsuit was filed last week and when District Five Magistrate Wayne Fleming asked if there was a possibility that Letcher County might join in the lawsuit, Judge/Executive Jim Ward replied, “There is a good possibility.”

Cub Scout Wolves Pack 820 took first place in the Whitesburg Christmas Parade with their float featuring a seven-foot-tall snowman dressed as a Cub Scout. The troop won $200 and went to the movies.