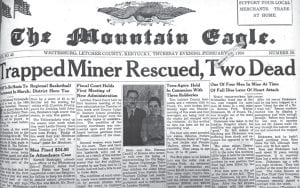 The headline across the front page of the February 16, 1950 edition of The Mountain Eagle shows what was on the minds of many Letcher County residents at that time — the outcome of a coal mine roof fall at Bottom Fork.

An unusually large crowd gathered Monday at the Letcher County Courthouse in Whitesburg for the examining trial of Luther Johnson, the liquor store owner who is charged with murdering Kimmer Donalds of Seco on January 21. As a result of the hearing, the charges against Johnson have been referred to the grand jury.

The Kentucky General Assembly has approved a bill that requires all applicants for a marriage license to file with the county clerk’s office a certificate from that county’s health department declaring both applicants free of venereal disease.

U.S. Rep. A.J. May has written an open letter to Letcher County residents asking they “not be too insistent or impatient” with the War Department as its engineers complete the preliminary work needed before a flood control dam can be built on the Cumberland River area of the county.

A Craft’s Colly coal miner died Monday of spinal meningitis. Erbie Pratt, a 34-year-old miner who worked at Farraday, was stricken last Friday while visiting his wife at the Fleming Hospital.

A movement is now underway in Kentucky, Tennessee and Virginia to establish a national historical park at Cumberland Gap.

Weary rescue workers on late Wednesday freed one of the two miners trapped for more than 24 hours in coal mine on Bottom Fork in Letcher County. Worley Dickenson, 59, of Pound, Virginia, was brought out of the mine about 4:45 p.m., and was taken to the Jenkins Hospital, where his condition is listed as “good.” Still inside the mine is 49-year-old Dewey Rose, also of Pound. Rescuers were left with little hope that Rose is alive after Dickenson told them he is positive that Rose was killed in a large roof fall. Dickenson and Rose were among four miners initially trapped by the roof fall. Two of them, Ernest Bryant, 47, and Worley Dickenson’s son, Paul, escaped. However, Bryant died a short time later after suffering a heart attack at his Bottom Fork home.

Talks between the United Mine Workers union and the nation’s bituminous coal operators resumed in Washington, D.C., this week after the sides were ordered to negotiate by a federal court.

Hunger was the main topic for discussion as the new administration of the Letcher Fiscal Court held its first business meeting this week. With County Judge G. Bennett Adams presiding, the court heard from several women who said their families have been left hungry by the continuing national coal strike. One woman told the court that her five children, ranging in age from two to 11 years old, had not had a bite of food to eat for the last three days.

One Letcher County man was fined $24.50 this week as school officials, led by attendance officer Kermit Boatright, crack down on parents for failing to keep their children in regular school attendance.

Four Letcher County teenagers, including two sisters from Neon Junction, are being held in connection with the Sunday night burglaries of the roller rink at Potters Fork, Craft’s Grocery at Jenkins, and the Veterans of Foreign Wars club in Pound, Virginia. The four teens range in age from 15 to 18 years.

Deputies from the Letcher County Sheriff ’s Department teamed with a federal revenue officer to raid a located at Bill Moore Branch in Letcher County, where three quarts of moonshine were seized and a charge of selling illegal whiskey was filed against Mrs. Oma Triplett.

A $10 reward is being offered for information leading to the arrest of the person or persons responsible for the theft of a March of Dimes container stolen from Woody’s Sundries in Whitesburg.

Several residents of Payne Gap attended the baptism of 26 people Sunday at the Kiwanis Club Swimming Pool in Jenkins.

The state House of Representatives has adopted a resolution calling upon state health officials to establish a tuberculosis hospital in Whitesburg. The resolution was sponsored by Rep. Harry M. Caudill of Whitesburg. At present, Tb. hospitals are located in central and western Kentucky, with none in the eastern part of the state.

Claude Tolliver scored 23 points to help lead the Fleming-Neon Pirates to a 60 to 57 win over the Jenkins Cavaliers. Larry Pack connected on nine of 10 field goal attempts to lead Jenkins with 18 points.

County Judge Robert Collins says he hopes to undertake a program to build 1,000 units of low- and moderate-income housing to be located near Jenkins, Neon, Mayking, Whitesburg, Blackey, and Eolia. Collins said he is also seeking water systems for the Haymond-Neon-Fleming- McRoberts-Hemphill area, the Mayking- Ermine area, the Cumberland River area, and the Blackey-Letcher area. Collins said he and Jenkins Mayor R. Percy Elkins had met with Frank Groschelle, administrator of the Kentucky Program Development Office, and had been assured of cooperation.

“Kentucky’s 300,000 teachers appear headed toward a showdown in the near future with both Democratic and Republican state leadership and also the voters, parents, and taxpayers of Kentucky,” says a Mountain Eagle editorial. “No one should be surprised if there is a statewide teacher strike in the days ahead . . . The teachers unquestionably have a strong case to support their demands for higher pay. They point the fact that teachers’ salaries within Kentucky chronically lag far behind national averages. And they further argue that in this time of near runaway inflation, substantial pay boosts are required just to stay even and keep from lagging further behind.”

The Letcher County Health Department announces an immunization program against German measles will be held March 9, 10, and 11 in school-centered sites. Funeral services were held February 8 for 14-year-old Richard Allen Coldiron, son of Ralph and Geneva Combs Coldiron Jr., who died after being a patient for two months in St. Joseph Hospital in Lexington. Richard, known as Ricky, was struck down rubella-induced encephalitis, an inflammation of the brain brought on by German measles.

Classes at Whitesburg Middle School met February 13 for the first time since a fire at the school on January 23. Sixthgrade classes are now held at West Whitesburg Elementary School, while seventh- and eighth-grade classes are meeting in the basement and third floor at First Baptist Church in Whitesburg.

The Kentucky Education Association says it appears unlikely that the average salary of the state’s classroom teachers this year will match or top the average of teachers in the seven surrounding states. KEA President June Lee said estimated salary averages put Kentucky at $14,480 and the combination of other states at $14,675 for this year.

“Are your pea seeds ready?” asks Jeremiah correspondent Hassie Breeding. “According to many gardeners, they must be planted February 14 (today).”

In its report, the Letcher Grand Jury advised Letcher Fiscal Court to meet its obligations for “furnishing the people of Letcher County a decent and adequate place in which to cast their votes.” The grand jury pointed to “intolerable conditions” at several polling places as one of two major problems uncovered during the jury’s examination of the November election. The other major problem found by the jury in last fall’s election was the use of “untrained people” as county precinct officers.

A Letcher County grand jury has returned a two-count indictment against Brenda Howard, 20, of Jenkins, accusing her of killing her infant son. Howard is charged with first-degree murder and endangering the welfare of a minor. An autopsy revealed Jeffrey Neal Howard died of a brain injury he suffered after being struck on the right side of the head.

Former Fleming-Neon Police Chief Neil Yonts faces up to 160 years in prison and more than $6 million in fines if he is convicted of federal drug, firearms and other charges contained in a 12-count indictment brought against him. Yonts was indicted on a variety of charges related to the burglary last June of Family Drug of Neon, the attempted burglary of McDowell Pharmacy in Floyd County, the alleged sale of three stolen firearms and the alleged possession and distribution of cocaine, marijuana, and prescription drugs.

Students finally returned to school after a three-week vacation forced on them by winter weather. Side roads remain slippery and the Letcher County School District asked parents in some hollows to bring their children to the main road to catch buses when they returned to school Monday. The break will push closing day for the county schools to around June 12 and closing day for Jenkins schools to about June 9.

Workers are creating the Pine Mountain Trail from Breaks Interstate Park to Pound Gap. Hikers will be able to use the trail this year, but shelters won’t be finished until summer 2001. So far, the group working on the trail has a $2,500 grant from the U.S. Parks Service to print brochures and design an Internet site. The Kentucky Department of Parks has already completed logo signs for the trail and the U.S. Forest Service is working on wooden signs identifying locations along the trail.

“Walt Disney’s The Tigger Moves” and “Scream 3” are showing at Whitesburg Cinema.

Out-of-state telemarketers are calling Letcher County residents and asking them if they would like to purchase controlled substances over the phone and have them shipped to their mailing address, says Letcher County Sheriff Danny Webb. The recipient then pays the postal carrier cash or with a money order. “It shows how much people are taking advantage of addicts,” Webb says.

A photograph of plans for the new county-owned recreation center, which will be built where the old A&P building was located, appears in The Mountain Eagle. The 42,000-square-foot structure will include a six-lane bowling alley, a walking track, and an exercise area. Three side-by-side basketball courts, and an enclosed batting cage are also planned.

About 100 customers of the Letcher County Water and Sewer District have been asked by the water district to issue a stop payment on recent checks and issue a new check to the water district. Tiffany Collins, clerk with the water district, said 96 checks received on January 29 were stolen from the front office located in the old health department building. “I think someone reached through the window and took a stack of checks,” said Collins.

Emily Walker was crowned basketball homecoming queen at Jenkins High School during a basketball game last week. She is the daughter of Joe and Pam Walker of McRoberts.