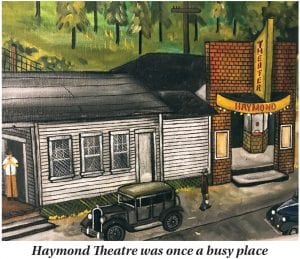 Pictured above is a portion of a painting by highly-regarded Letcher County artist David Lucas depicting the old Haymond Theatre as it stood in the center of that once-bustling coal camp. Seventy years ago this month — on March 9, 1950 — the Haymond Theatre showed the movie “Thunder in the Pines,” starring George Reeves and Greg McClure. The Haymond Theatre was one of at least four movie houses doing business in Letcher County at that time. Others were in Jenkins, Neon and Whitesburg.

More than 30 men from Letcher County were sentenced to prison terms ranging from one to two years last week in federal court in Jackson. The 30 were among 200 men sentenced by Judge Cochran last week, all on charges of violating prohibition laws.

Under the headline “Two Great Men Die,” The Mountain Eagle reports on the March 8 deaths of former President William Howard Taft and U.S. Supreme Court Justice Edward Terry Sanford. The two men had served together on the High Court.

The Letcher Fiscal Court has purchased a new tractor and grader for use on county roads.

Summing up the news of the previous seven days, Mountain Eagle editor Nehemiah M. Webb writes, “Not a serious automobile wreck, nobody shot or killed, and no one much hurt in the coal mines is a nice record for The Eagle this week.”

A large party of Chesapeake & Ohio Railroad officials blew into Jenkins about noon Tuesday on a special train made up of sleepers, chair and dining cars — all modern and exquisite. “In their usual modest way the officials hesitated long enough to breathe the pure, fresh, and invigorating mountain air, shake the hands of a few of their friends — the railroad’s local boys and a few officials of the Consolidation Coal Company,” The Mountain Eagle reports. “(After) puffing a few puffs, the long train sped on up to Number Six and Number Seven mines, viewing everything as they went, looking of the tracks and sidings. A short stay there, the officials turned their way back, glad they came again to the deep recesses of the romantic mountains rich in black diamonds that have made this region famous throughout the country.”

Excavation work started this week on the site for the new Methodist Church on Main Street in Whitesburg.

Enforcement of a new state law requiring medical examination for venereal diseases before marriage licenses can be issued has been postponed from March 1 until January 1, 1941, said Letcher County Clerk Cossie Quillen.

Van B. Frazier is expected to start his Hotspot sawmill up in a few days after a two-month break for bad weather.

Myrna Loy and William Powell star in the movie “Another Thin Man,” showing Sunday and Monday at the Bentley Theatre in Neon.

United Mine Workers President John L. Lewis and the nation’s soft coal operators signed a new contract earlier this week, ending the worst coal strike in history. Terms of the new contract include a 70-cent daily wage increase for coal miners, raising their daily pay to $14.75.

The Kentucky Court of Appeals ruled late last week that Charlie Wright, a Democrat, defeated Republican candidate Troy W. Frazier in the November 8, 1949 race for the office of Letcher County Clerk. Frazier, who had 5,038 votes to 4,979 for Wright in the original returns, will file a petition for rehearing, his attorneys say.

“Thunder in the Pines,” a movie starring George Reeves and Greg McClure, is showing tonight at the Haymond Theatre in Cromona.

The Whitesburg VFW Post revealed this week that it plans to purchase a fire truck and set up a volunteer fire department to serve rural Letcher County areas not protected by a city fire department. A VFW committee, headed by Philmore Bowen, appeared before the Whitesburg City Council Tuesday night and asked the city to sell one of Whitesburg’s two fire trucks to the club. Whitesburg Fire Chief Remious Day explained that such a sell could not occur because the city must have two fire trucks for its insurance rating. Bowen said the club will look elsewhere for its truck.

Letcher County Attorney F. Byrd Hogg announced today that he is a candidate for the Republican nomination for representative from the Seventh U.S. Congressional District. Hogg, 37, a native of Kingscreek, is now holding his first political office. The congressional seat is now held by Carl D. Perkins, a Democrat from Hindman.

Ray Collins and Bradley Bentley, co-owners of the Royal Crown Cola bottling plant at Ermine, say they have invested $50,000 in machinery required to bottle the new 16-ounce size drinks as well as the smaller ones. The Whitesburg RC plant is second only to Louisville’s in the number of drinks produced daily.

A bill making Letcher County a separate judicial district has become law without the signature of Governor Bert T. Combs. The new law will take effect in the middle of June.

The Mountain Eagle reports that a construction project at the R.H. Hobbs Co. store is “more evidence that not everyone is convinced that Whitesburg is a has-been town.” A few days ago, carpenters cut a large hole in the center of the Hobbs store and installed a stairway to the store’s basement, which will now become another floor of sales space.

Letcher County Deputy Sheriff Alonzo Sizemore has been charged with shooting and wounding as the result of an affray on Saturday night, March 5, that resulted in the critical injury from a gunshot wound of Manuel Bentley, a 25-year-old coal miner. According to Letcher County Sheriff Johnny Fulton, the shooting happened after Deputy Sizemore answered a call for help by club operator Clyde Polly. Fulton said that after Sizemore arrived he was forced to fire a shot into the floor of the club to quiet the dozen or so men who were there. Fulton said Sizemore told him he had his pistol in his hand as he sought to push Manuel Bentley out the door but did not know it was cocked. During the scramble the gun fired, sending a .45 caliber bullet into Bentley’s body above the rear of the right hipbone and passing on through the body. The bullet has not been recovered. Sizemore, who insists the shooting was accidental, is free on a $3,000 bond.

Letcher County Judge Robert Collins says he is getting a great number of calls from Letcher Countians who have been laid off from Ford, General Motors and Chrysler. “It just looks like we might be in for a kind of reverse migration that is going to bring a whole lot of people back to the mountains,” he said.

Letcher County teachers are back in their classrooms after more than a week out on strike. The teachers returned to school following a decision of the Kentucky Education Association that state teachers had nothing further to gain by continuing their 10-day walkout.

A 50-unit rent supplement housing project for Whitesburg moved a step closer to reality with approval by the Federal Housing Administration in Louisville of a “firm commitment” to insure the mortgage on the project. The project was initiated almost three years ago by Southeastern Kentucky Housing Development Corporation of Whitesburg, a nonprofit corporation formed to sponsor housing for low- and moderate-income families.

A special examination will be given March 9 at the courthouse in Hazard for would-be employees in the 1970 Census in Letcher and surrounding counties. Some 20 persons are expected to be hired to work in the Letcher County portion of the Census.

The first bill in the 1970 General Assembly to be defeated by a floor vote in the House would have allowed women to work as bartenders and sit at bars in places which serve liquor or wine. The law preventing women from doing either will remain as is.

Eight-year-old Letcher Countian Elizabeth Mason got a taste of stardom last night when “Coal Miner’s Daughter” premiered in Louisville. She was one of 11 Letcher County youngsters cast in the production, partially filmed on location near Whitesburg. She portrays Betty Sue, the oldest daughter of singer/songwriter Loretta Lynn. The film, starring Sissy Spacek, chronicles Loretta Lynn’s life, from humble beginnings in eastern Kentucky to super-stardom in Nashville.

Letcher County’s Olivia Maggard has been named executive director of the Kentucky Film Commission. Ms. Maggard’s most recent work came in Hollywood where she assisted “Roots” author Alex Haley on a television production of a series dealing with the Great Depression in the South. She also served as Letcher County liaison for the film “Coal Miner’s Daughter.”

Amburgey Construction has been selected to remodel the old Coca-Cola building into a branch campus of Southeast Community College. Construction is slated to begin sometime this spring and to be completed by the beginning of the fall college semester in August.

Rep. Paul Mason (D-Whitesburg) has pushed through the House a sweeping bill that prohibits discrimination against people with acquired immune deficiency syndrome (AIDS), but also opens the door to mandatory testing for the disease in some instances. Mason’s interest was spurred by his daughter, Belinda, who was infected with the disease by a blood transfusion.

Mountain Comprehensive Health Service has added two Letcher County natives to its professional staff. They are Dr. Artie Ann Bates, a physician, and Dr. Shelby Collins, a dentist. Both grew up in the Blackey area.

First Lieutenant M. Keith Callahan has received the Army Achievement Medal at Fort Knox. The medal is awarded to soldiers for meritorious service, acts of courage and other accomplishments. The lieutenant, a platoon leader with the 19th Engineer Battalion, is a son of Corrum and Flossie Callahan of Ermine. He is a 1983 graduate of Whitesburg High School and a 1987 graduate of Morehead State University.

Letcher County schools stand to lose another 7.5 teaching jobs next year, under a staffing allocation plan approved by the board of education. Staffing is based on the number of students in the district. According to the latest enrollment figures, there are 3,772 students enrolled, down 152 from last year.

Tim Blair, son of Doreen Calhoun of Blackey and grandson of Brady Blair of Letcher, has been promoted to the rank of major in the U.S. Army. He had been assigned to the Pentagon beginning in April, and will work for the Secretary of Defense.

Water customers in the City of Jenkins will soon see a slight increase in their monthly bills. The Jenkins City Council voted to raise water rates by 25 cents for the first thousand gallons used by a customer.

A commemoration ceremony and dedication of a historical marker in observance of the 34th anniversary of the 1976 Scotia Mine disaster will be held at 10 a.m., March 9. The event will take place adjacent to the Scotia Miners Union Hall.

Citing a need to make up 29 days of classes already missed because of bad weather and other issues, the Jenkins Independent Board of Education has voted unanimously to cancel a week-long spring vacation for students and teachers that had been scheduled to begin April 4.