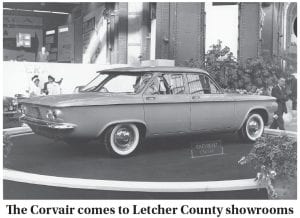 Chevrolet’s new Corvair, a compact car manufactured from 1960 until 1969, made its debut in Letcher County in April 1960, when it hit the showrooms at Boone Motor Company in Jenkins and Whitesburg. The name Corvair was chosen from a combination of Chevy’s Corvette and Bel-Air cars. The Corvair came in several styles, including 2-door coupe, 4-door sedan, convertible, 4-door station wagon, passenger van, commercial van, and pickup truck. Production of the Corvair, which featured a rear-mounted engine, ceased as Chevrolet gave priority to its Camaro line to compete with the Ford Mustang. The photo above shows Corvair’s 1960 model 4-door sedan. (AP Photo)

“The vigilance and forethought Jenkins Police Chief W. Henry Sergent and his able aides resulting in the capture of the burglars who on March 17 stole from Consolidation Coal Company’s McRoberts Store a large amount of goods — totaling possibly around $1,000.” According to this special report to The Mountain Eagle, Chief Sergent and his officers captured three suspects after waging a “determined effort, never letting up” until after they located the men. The report adds, “As a result, Woodrow Robinette, the leader in the depredation, Kelly Blevins, and Carl Hamilton are now “behind iron bars” after being arrested in the Coeburn-St. Paul section of Virginia. It is the second time Robinette has been charged with burglarizing the company store at McRoberts.

Several “big events” are set to take place in the city of Jenkins over the next few weeks. Among them is the May 10 debut here of the blockbuster movie “Gone with the Wind” at the newly remodeled Jenkins Theatre. Before that, however, the professional boxing season opens April 27 at the Jenkins American Legion, when Ival “Moon” Mullins tops a bill that will cause boxing fans to “sit up and take notice.”

“Will FDR run for a third term?” According to a front-page commentary, the question of whether President Franklin D. Roosevelt will seek another term in the White House is the top political question now on the minds of Letcher County voters.

Forest fires started by carelessness or arsonists are raging on Pine Mountain, between Whitesburg and Jenkins. “Time and time again we have told of the great disasters caused by forest fires, but they continue just the same,” writes Mountain Eagle editor and publisher W.P. Nolan. “Shame, shame, shame indeed.”

The Kentucky General Assembly has passed a bill establishing a teacher’s retirement system.

The L&N Railroad this week removed its rail line from McRoberts. Railroad officials said the track, which was laid there more than 30 years ago, was pulled up because there was no longer any rail traffic in the community.

The new 500-seat Neon Theatre will open this Friday, April 21. Theatre manager Sam Franklin said the opening of the new movie house will reduce showings at its sister Bentley Theatre, also of Neon, to Saturdays and Sundays only, with mostly westerns on that screen. The opening feature for the Neon Theatre will be the 1949 comedy “It’s a Great Feeling,” starring Dennis Morgan, Doris Day, and Jack Camron. Franklin said the Neon Theatre was built with local labor using construction materials also purchased locally. The project, built at a cost of $125,000, is complete except for installation of the airconditioning system.

Excavation has begun on the site of a proposed modern supermarket to be built between Holstein Hardware and the Methodist Church on Main Street in Whitesburg. No tenant for the new building, which is expected to be one of the most modern in the state, has been announced.

Six rooms are being built onto the Pine Mountain Resort Hotel near Whitesburg, bringing the total number of rooms to 19 when the project is finished around May 15. Hotel manager Ellis Morgan said the improvements will make the hotel “one of the finest in the southeastern Kentucky area.”

A 20-year-old coal miner from Princeton, West Virginia was charged with manslaughter Friday night after the car he was driving struck and killed a 73-yearold minister at Potters Fork. Authorities say the Rev. M.C. Overholt was on his way to church services when a car driven by Darrel Blevins, who was returning home from his job with a coal company on Rockhouse, hit him. Blevins immediately surrendered to authorities after the mishap and was released Saturday after posting a $1,000 cash bond. The case has been referred to the July Letcher County Grand Jury.

Letcher County Judge Robert B. Collins and Sheriff Hassel Stamper are ordering all public businesses in Letcher County to close by 10 p.m. Central Standard Time on weeknights and 12 p.m. CST on Saturdays. The two officials say the new rules are needed to halt criminal activity in some business across the county, especially those featuring “amusements.” “There are several places being operated behind blinds or even windows painted over with colored paint,” a statement from Collins and Stamper says. “We feel that law violations are going on in these places, and if the blinds and paint are not removed we will have to ask you to discontinue operations.”

A Mountain Eagle editorial is calling on Letcher Circuit Court officials to start calling women as jurors. Noting that the April term of court had to be dismissed for lack or jurors, The Eagle says, “If women’s names had been drawn they would have been glad, we believe, to serve. But no names of women were drawn and, more than likely, no women’s names were put in the jury wheel in the first place. We wonder why?” The editorial notes that women “can do just as good as men on juries. They are just as intelligent and just as fair-minded.”

The Louisville & Nashville Railroad Company is celebrating its 100th anniversary.

Governor Bert Combs will arrive in Letcher County at about 3 p.m. on April 29, and then he escorted on a tour of Pine Mountain, which Combs is being urged to name as a future state park.

An indictment for willful murder was returned Monday by the April grand jury against Deputy Sheriff Alonzo Sizemore in the fatal shooting March 5 of 25-year-old coal miner Manuel Bentley. Bentley died March 11, six days after Sizemore shot him at the Neon American Legion.

The Letcher County Public Library may get a new lease on life if the Louisville & Nashville Railroad approves of plans to turn the former passenger waiting room at the L&N’s Whitesburg depot into a new home for the library. The 35 by 35 foot room has not been used since train passenger service from Whitesburg to Lexington was discontinued.

The Whitesburg City Council voted to close the auditorium at Whitesburg Grade School because of fire and structural danger. When Fire Chief Philmore Bowen visited the school, he found that repairs to the auditorium were under way and after conferring with some council members he decided against padlocking the auditorium.

Work will begin today on demolition of the old Louisville and Nashville Railroad depot in Whitesburg, a landmark for 58 years.

Letcher County triplets Josephine, Florine and Earnestine Bise are eight years old and are students in the Fleming-Neon Grade School. They are the daughters of Mrs. Alice Faye Bise and the granddaughters of Mr. and Mrs. William and Imogene Tilly of Fleming.

The City of Whitesburg has informed Kentucky Power Company that the firm has 30 days to remove all equipment connected with the sale and distribution of electricity that the company owns, including poles and lines from within the city limits. The move comes as a result of Kentucky Power’s refusal to bid on an electric utility franchise the city put up for bids in November.

The Letcher County Board of Education will take legal action to try to collect for losses the board says it incurred last fall when structural damaged forced condemnation of the old Whitesburg High School building and a storage building. The damage was presumably caused by blasting work done for the Whitesburg bypass around the School Hill area.

Whitesburg High School teacher Jon Henrikson has been elected to a two-year term as vice-president of the Kentucky Education Association. Henrikson, of Carcassonne, who is the history and social studies teacher and drama coach at the school, will begin his term August 1.

“Coal Miner’s Daughter” has been held over for another week at Isaac’s Alene Theatre in Whitesburg. “The Cremator” is playing for the late show.

Beginning in July, anyone who buys an insurance policy to cover property in Fleming-Neon, Jenkins or Whitesburg will have to pay a tax based on the percentage of the insurance premiums. In Jenkins the tax will be three percent; in Fleming-Neon and Whitesburg it will be five percent. Officials of all three cities said they need the added revenue to provide needed city services and to make needed improvements to city properties.

Mahala Reynolds Craft, a fourth-grade teacher at West Whitesburg Elementary School, has received a letter from Who’s Who Among America’s Teachers saying she has been nominated by a former student, Thomas G. Roark, as a teacher who has made a difference in his life.

Letcher County may end up laying off employees after being hit with a $33,000 bill for workers’ compensation insurance dating to 1997. Letcher County had estimated a yearly payroll of $1.2 million, but the actual payroll was $1.7 million. Part of the $33,000 is because of the $500,000 difference in payroll, but another part is because employees were incorrectly classified. Compensation costs less for office workers than for road workers or police.

Letcher County officials have signed deeds to buy 31 acres of property at Isom to be used as an industrial site. The property includes the old Swannee Coal Tipple built by South East Coal Co. in the 1970s. The county won the bid on the property at a bankruptcy auction in December.

Police are still recovering stolen vehicles from what they say is a multi-state chop shop operation. Kentucky State Police recovered a log truck at Colson that had been stolen in Abingdon, Va. In March, police say the value of vehicles that had been recovered was about $2 million. That has since increased.

Free computer workshops are scheduled at two locations in Letcher County. The workshops are planned to teach residents about computers and the Internet. Topics to be covered include basic information on computers, introduction to the Internet, searching the worldwide web, and how to obtain a free e-mail account. The workshops are sponsored by Mountain Association for Community Economic Development (MACED) in Berea.

A Mountain Eagle editorial, following the deaths of 29 coal miners in a massive explosion at Massey Energy’s Upper Big Branch Mine in West Virginia, asks the question, “Why do miners die?”. The answer, according to the editorial, is “They die because of negligence. They die because the company they work for cares more about running coal than making mines safe. And they die because the federal agency that is charged with protecting them fails in its mission.”

The new Haymond Sewer Project is about 10 percent complete and about 75 percent or slightly more of the potential customers have signed up. Customers who go ahead and sign up for service while construction is underway will have their tap fee waived, while those who wait until a later date will have to pay the full amount, which is estimated to be $3,000.

Jenkins High School seniors have been forced to revise their ambitions for a senior trip to Hawaii downward in light of their inability to raise sufficient funds. The Jenkins Independent Schools Board of Education voted to approve a trip to Orlando, Fla., instead of the originally planned Hawaii trip.

In his column Struttin’ Time, Steve Brewer writes of his hopes to complete a grand slam in wild turkey hunting. He says he already has three of the four turkeys needed.