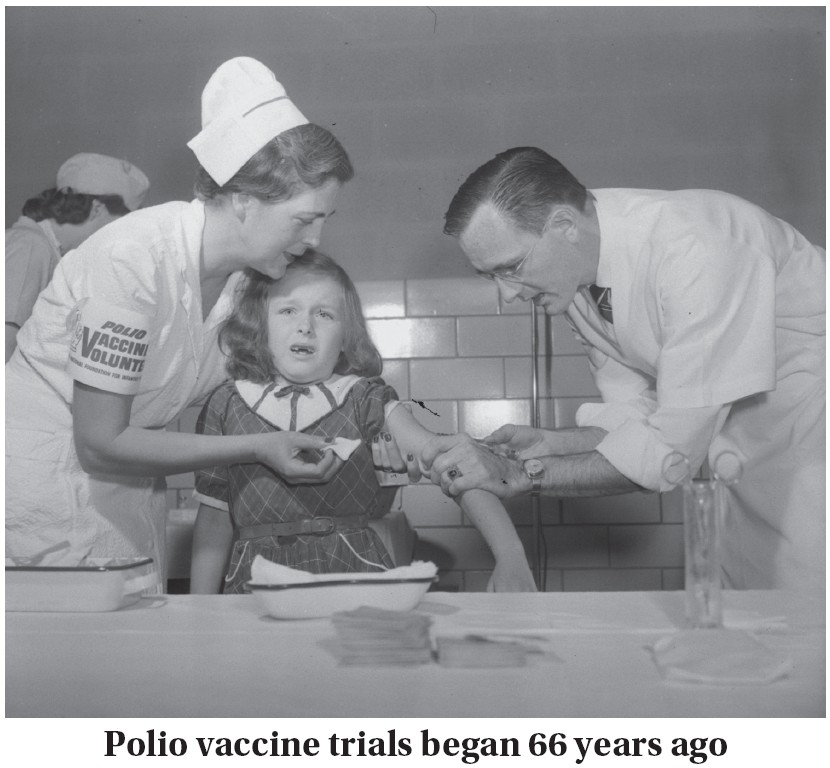 On April 26, 1954, the Salk polio vaccine field trials, involving 1.8 million children, began at the Franklin Sherman Elementary School in McLean, Virginia. Children in the United States, Canada and Finland participated in the trials, which used for the first time the now-standard double-blind method, whereby neither the patient nor attending doctor knew if the inoculation was the vaccine or a placebo. On April 12, 1955, researchers announced the vaccine was safe and effective and it quickly became a standard part of childhood immunizations in America. In the ensuing decades, polio vaccines would all but wipe out the highly contagious disease in the Western Hemisphere. Pictured above, seven-year old Mimi Meade winced from the sting as Dr. Richard Mulvaney inoculated her on that first days of the trials in McClean, Va., with the new Salk polio vaccine. Mrs. John Lucas, a registered nurse, held Mimi’s arm steady as she got one of the first injections of the countrywide test. (Text by History.com/AP Photo)

The hardware store owned and operated by Ed Maggard of Whitesburg was broken into and robbed. Items taken include 24 Remington knives; 5 Big Ben watches for men; 8 Gen razors; 1 fish rod, brand Fork and Hoe; an alarm clock, color maroon; and a small amount of money. Chief of Police Gilbert Polly is holding $25 reward for the capture of any person or persons or any information leading to the arrest and conviction of any person or persons connected with this robbery.

Sports fans of Jenkins and the entire area surrounding will be interested to know that they can see the first boxing match of the season on the local arena of the American Legion here April 27. Pretty evenly matched as to size and both real scrappers are Frankie Hughes of Miami, Fla., and Pete Urban of Cincinnati, Ohio.

The Whitesburg Future Farmer Chapter had its first member, Harry Caudill, apply for a State Farmer’s Degree. To become a State Farmer one must have made $250 profit or have $250 invested in some kind of farming. He must be in the upper 40 percent of his class in all subjects. Harry has met all the qualifications, and we sincerely hope that he makes the grade of State Farmer

Playing at Isaac’s Kentucky Theatre this week are “The Under-Pup” with Gloria Jean and Nan Gray, “The Rains Came” starring Tyrone Power and Myrna Loy, “Our Neighbors, The Carters” with Fay Bainter and Frank Craven , and “Man From Dakota” with Wallace Berry and Dolores Del Rio.

The Kentucky Court of Appeals has denied a petition for a rehearing in the recount proceedings connected with the Letcher County Clerk’s office. The office is being sought by Charlie Wright, Democrat, and Troy W. Frazier, Republican. Previously the Court of Appeals had declared Mr. Wright the winner. Mr. Frazier had been declared the new clerk following the November election and has held office since January. In the denial for a rehearing in the case, Mr. Wright will become the new county clerk.

Cpl. Herbert Adams of Whitesburg has been selected to take part in the gigantic airborne maneuvers now starting in the Carolinas. “Exercise Swarmers”, as the Army and Air Force refer to it, will the first since the war that involves two airborne divisions. A member of the Division Artillery of the 11th Airborne Division of Pacific fame, Adams is a qualified parachutist with a number of jumps to his credit.

Decision on whether Whitesburg will obtain carrier mail service is in the hands of the Post Office Department and Postmaster General Arthur Summerfield, it was announced by Sam Collins, Jr., Whitesburg postmaster, and Fred Coffey, president of the Whitesburg Chamber of Commerce. An inspector is expected to come to Whitesburg to check on the situation. Local officials expressed optimism that the service will be approved.

Letcher County will get a firsthand look at the state administration’s plans for the area Friday when Gov. Bert Combs addresses a banquet at the Whitesburg VFW Clubhouse. The dinner is sponsored by the Whitesburg Chamber of Commerce, which will present to the governor a program for Letcher County: 1. A first-class highway through the county. 2. A state park on Pine Mountain. 3. Flood control lakes. 4. An airport.

William Burdine Webb, who reported news for The Mountain Eagle since it was founded in 1907 by his brother Nehemiah, died unexpectedly Wednesday morning at Sergent. He was 85. The credit line, “By Burdine Webb,” appeared in newspapers over several states for half a century with the news from Letcher County. The Burdine Post Office was named for him.

A second trial has been set for July 12 in the case of four Letcher County men accused of dynamiting a bridge June 20 during a mine strike. The men are Wid Page, 28; Troy Holland, 35; Irvin Napier, 31, and John Stidham, 51, all of Marlowe. They are accused of dynamiting the railroad bridge at Marlowe which leads to a mountain mine.

A preliminary study to determine the feasibility of a Pine Mountain tunnel in the Whitesburg area has been authorized. The study will extend along US 119 from near the Harlan-Letcher line about 11 miles to the intersection of the proposed Whitesburg bypass.

The U.S. Senate Finance Committee this week began discussion of the Nixon administration’s welfare reform bill, which passed the House of Representatives last week. The welfare reform plan passed by the House provides a guaranteed income of $1,600 a year for a family of four.

U.S. Air Force Major Eddie L. Young, son of Mr. and Mrs. John T. Young of Jenkins, has been decorated with the Bronze Star for meritorious service while engaged in military operations against Viet Cong forces. He is a 1941 graduate of Dunham High School. His wife, Willie, is the daughter of Clinton Mahone of Jenkins.

This week marks The Mountain Eagle’s 73rd birthday. This issue is Number 1 of Volume 73. The first issue of the paper appeared in August 1907, but through several changes in ownership the birthday date is now in the spring. The family of the late Manon Webb of Mayking called to report they had found a notation in his family Bible that the first issue of the Mountain Eagle, the first newspaper printed in Letcher County, appeared in August 1907.

Al Howell, an official in the state Department for Local Government, told Letcher Fiscal Court that the county will have a debit of $400,000 when the new fiscal year starts July 1. The debit includes $191,850 owed to local banks, mostly for money borrowed to pay bills; two payments of $45,000 each owed to the Kentucky River Garbage District; $30,000 to Collins Lumber Company; and $120,000 in lease-purchase payments.

Ambulance service may be available again to all Letcher Countians beginning May 1. Money needed to begin operation of the county’s first nonprofit, non-volunteer ambulance service was secured when more than 1,000 people pledged donations amounting to more than $23,000 in a “radio-thon” at Whitesburg Appalachian Regional Hospital.

The average cost of gasoline in central and eastern Kentucky increased three cents per gallon in April at full-serve stations and four cents at self-service pumps. The average cost of gasoline for full-service pumps is $1.23 for regular, $1.28 for premium, $1.27 for no lead, and $1.16 for diesel. Self-service prices are $1.16 for regular, $1.25 for premium, and $1.22 for no lead.

The Letcher County Fiscal Court has voted to make Golden Years Rest Home a county institution so its employees can participate in the state retirement plan. James F. “Chum” Tackett, administrator of the rest home, asked the court to take the action, through some magistrates were reluctant to take on the home as part of county government.

A second convenience store has been robbed in two weeks in Letcher County. Police say a man entered Pine Mountain Market Kwik Mart in Whitesburg about 3:15 a.m. Monday and demanded money. He apparently got away with about $160, police said. An armed robber got away with about $275 from the Isom Kwik Mart about 2 a.m. on April 9, also a Monday morning.

Fire departments in Letcher County are asking the county to pass a fire district tax to support them. The Letcher County Fire Fighters Association hopes to lower the fire insurance ratings for the county and build a training center for the firefighters, but currently there is not enough money to do that. The association asked the county to levy a 10-cent per $100 property for fire protection and place a tax on insurance premiums for residents outside the corporate limits of Whitesburg, Fleming-Neon and Jenkins.

The U.S. Army Corps of Engineers is advertising in The Mountain Eagle for property to lease. The Corps is seeking 4,000 square feet of ground space, which should include a kitchen facility, classroom space, and restrooms with adjacent parking space for 35 vehicles.

Budget appropriations from the state legislature may mean Letcher County can go ahead with construction of a proposed water line from Jeremiah to Isom. The Kentucky Senate and House of Representatives approved a state budget that includes $6,283,000 for projects in Letcher County. Of that total, $1.6 million was appropriated for the Letcher County Water and Sewer District.

Engineers are studying old mining records to determine whether any of seven possible sites for a new county high school could be adversely affected by mine subsidence. Bocook Engineering of Paintsville is also checking with the City of Whitesburg about water availability to the sites, with American Electric Power about electrical power to the sites, and with the Kentucky Department of Highways about highway access.

Letcher County’s unemployment rate was 11.7 percent for February and 9.1 percent for the year 1999. The February was seventh highest in Kentucky and the highest in the Kentucky River Area Development District for 1999.

Electricity was off to 850 households and businesses from more than six hours after a pickup truck sheared off a power pole and another vehicle became entangled in the wires. The accident occurred a quarter-mile north of the intersection of Ky. 160 and Ky. 588 at Premium.

Police in Letcher County are expressing concern over the appearance of heroin and other hard drugs not common to the area. Two Florida residents were arrested in Whitesburg after admitting to police they were high on heroin. Those arrests came a week after a Mayking man told Lt. Brian Damron of the sheriff ’s department that he was coming off of a heroin high when he was arrested for terroristic threatening and public intoxication.

When Richard Gilliam sold his Cumberland Resources coal company to Massey Energy, Gilliam wasn’t the only person who made money on the deal. In an unusual showing in philanthropy in any industry, Gilliam decided to share $80 million of the proceeds he is getting from his deal with Massey with each of his 1,200 workers in eastern Kentucky and southwestern Virginia. Gilliam gave each of his former employees a cash bonus of at least $4,300, plus a contribution to each employee’s retirement or 401k plan or an amount ranging from a minimum of $13,000 to well over $20,000.

The Jenkins Lady Cavs traveled to Whitesburg for a game with county rival Letcher County Central and came away with a 14-3 win.

The 34th annual Carr Creek Lake cleanup will take place from 8 a.m. to noon on April 24. The Cleanup Committee will pay $1 for each full bag of trash.