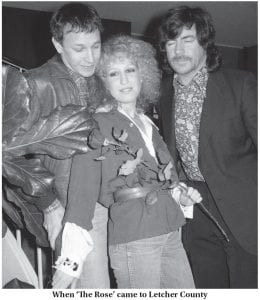 Bette Midler, center, star of the movie “The Rose” and her co-stars Frederic Forrest, left and Alan Bates, right, stand on stairway in penthouse of the New York Hilton Hotel in spring 1978, where the movie that is based on the story of rock star Janis Joplin was being filmed. Two years later the movie, which follows the career of a self-destructive 1960s rock star, showed in Whitesburg at the Alene Theatre. The movie went on to be nominated for four Academy Awards. (AP Photo/Ira Schwarz)

Last night at a late hour, a terrible tragedy was enacted at the mouth of Thornton. If reports are true, two young men of the neighborhood, R.H. Holbrook and Charlie Adams, both unmarried, were out walking with two of the young daughters of John Newsom. Mr. Newsom, becoming uneasy over his daughters, left his home and went to look for them, and soon came across them walking along with the young men. He suddenly began firing at the young men, shooting them both to the ground. Early this morning Holbrook died at the Seco hospital and Adams, at the Fleming hospital, is not expected to survive. So far as heard this morning, Newsom has not been arrested.

We regret to state that Prof. H.H. Harris, residing on College Heights in our city, is very ill. His sickness is the result of having several teeth extracted. His host of warm friends trusts his condition will soon be reported favorable. No man in eastern Kentucky is better known and better loved than Prof. Harris

The junior class of the high school entertained very elaborately on Saturday evening with a delightful banquet in honor of the graduating class. The gymnasium was transformed into a spacious garden where spring flowers of every variety were in bloom. Dainty and appropriate favors were given and a most delightful program rendered.

Two young men, who claimed to be from Perry and who were driving a Buick touring car, went over a 50-foot embankment on Tunnel Hill above Whitesburg. The young men were apparently intoxicated and when questioned as to their names refused to give any information. They were taken to Hazard and it is reported that one of them died from the effects of the wreck. The other is still in serious condition.

Jack Duncan, an employee of the Cotton State Shows, was shot and killed in Neon Wednesday by Bill Thomas, another show employee. The shooting took place in a toilet at the Cumberland Hotel, but according to the hotel manager, neither of the men was registered at the hotel. According to witnesses, the deceased was shot five times at close range with a .38 pistol and ran from the hotel to the street before collapsing. From what we could learn, the killing was the result of a grudge of long standing.

Mr. and Mrs. Sam T. Webb of Waynesburg celebrated their 50th wedding anniversary May 12 with a family reunion and a festive dinner at their home. Mr. Webb was born and reared in Letcher County where he taught in the public school for a number of years. He is a brother of our former publisher, N.M. Webb. Mrs. Webb hails from Kingsport, Tenn. She was Miss Elizabeth Hicks, a popular young belle of the gay ‘nineties.’

The National Coal Association, from incomplete car loading reports from the railroads, estimates bituminous coal production in the United States for the week ended May 11 as approximately 7,950,000 net tons.

“Rulers of the Sea” starring Douglas Fairbanks Jr. and Margaret Lockwood and “What A Life” starring Jackie Cooper and Betty Field are playing at the Bentley Theater in Neon this week.

On Feb. 23, 1945 S.Sgt. Ballard J. Bentley was killed in Erkland, Germany, while performing his duties as tail gunner. Funeral services will be held at the Missionary Baptist Church in Neon Saturday. All business houses will be closed for an hour. Ballard, who is survived by his parents, Mr. and Mrs. Mack Bentley, and two sisters and many other near relatives, was one of Neon’s best loved men when he was growing up. He always personified youth and happiness with his beautiful black hair and his sparkling good looks.

American Legion Post 104 of Neon will hold military memorial services at cemeteries on Sunday, May 28.

“Ma and Pa Kettle Go To Town” with Marjorie Main and Percy Kilbride and “On The Town” with Gene Kelly, Frank Sinatra, Betty Garrett and Ann Miller are playing this week at Isaac’s Alene Theatre in Whitesburg.

First Baptist Church, Whitesburg, has called the Rev. Charles Q. Carter as its pastor. He is a native of Toccoa, Ga., and a graduate of Mercer University, the Baptist college of Georgia.

Letcher County’s ailing public library got a shot in the arm this week. The Louisville and Nashville Railroad signed a contract with the library’s board of directors renting the library the waiting room at the Whitesburg depot for $2 a year. In addition, the railroad re-installed plumbing in the waiting room restroom and said it would pay the library’s water bills.

Considerable damage to trees and buildings was reported over Letcher County as the result of the thunderstorm Tuesday night. The wind created strong twisting gusts but less than half an inch of rain was indicated. Fallen trees were cleared from roads on Rockhouse, Colley and Sandlick Creeks and Camp Branch. Many television lines to hilltop antenna were knocked down.

Coal miners who stand to benefit from the new black lung compensation law have been summoned to a meeting by the Hazard office of the Social Security Administration. The miners are instructed to bring their Social Security cards, a list of coal mines where they had worked, proof that they had worked in the mines, their children’s birth certificates, their marriage certificates, and a list of doctors who have x-rays of the miner’s lungs.

The Kentucky Water Pollution Control Commission has ordered that no more customers may be added to the Whitesburg city sewer system until it has been expanded. The ban on new sewer connections is holding up construction of a 60-unit public housing project, a 45-home subdivision, a new elementary school, and a 50-unit rent supplement apartment complex.

Army Sergeant David L. Caudill, 20, son of Mr. and Mrs. Bryan Caudill of McRoberts, was assigned recently as a mortar man with the 101st Airborne Division in Vietnam.

“A birthday dinner was given Sunday, May 10, in honor of Dee Smith and Mary Adams at Dee Smith’s home,” writes Jeremiah correspondent Clarinda Back. “They are twins and are 71 years old.”

County officials hope to be able to turn Fishpond Lake over to a private firm on a long term contract in an effort to get the lake cleaned up and usable and see that it is kept that way. The restrooms are filthy and bottles are broken over the tennis court, rendering it useless, said Magistrate Charles Dixon. Vandalism has been a problem at the Payne Gap facility since its conception. The fiscal court has authorized Judge/Executive Robert Collins to advertise the lake for lease if it is legal to do so.

Fleming-Neon officials have received a combination state and federal grant for $40,000 to go toward emergency repairs on the city’s rapidly deteriorating water and sewage system.

Rudolph “Doc” Williams has been named vice president and general manager of Lake Coal Co., Inc., a subsidiary of Howell Corporation based in Whitesburg. Prior to joining Lake Coal, Williams had worked for or owned several coal companies over his 35-year career. From 1972 to 1974 he served as a Kentucky state representative for the 91st District.

“The Rose”, starring Bette Midler and Alan Bates, is playing this weekend at Isaac’s Alene Theatre in Whitesburg.

Jenkins teachers have asked the Jenkins Board of Education for a 25 percent pay increase for next year. Superintendent Parker Tiller said he supports a “substantial” pay increase and will make a recommendation to the board next month, but said he did not want to be responsible for bankrupting the system.

Letcher County’s jobless rate fell by onehalf of a percentage point in March to 7.8 percent, nearly four points below the March 1989 estimate. The Letcher County rate was the third lowest of the eight counties of the Kentucky River Development District.

Two men charged with sexuality abusing a child, and a brother and sister charged with drug trafficking are among 13 persons indicted by the Letcher County grand jury.

A study by the Kentucky Geological Survey confirms earlier assessments that eastern Kentucky’s coal reserves are dwindling. The survey looked at the size of coal seams in the state’s Appalachian region. It showed that more than half of the thick coal has been mined out in several premium seams. The estimates raise questions about how long the state’s coal industry can sustain annual production of 150 million to 160 million tons given today’s technology. The survey didn’t predict how many years the Kentucky coal industry can sustain current annual tonnage.

Letcher County officials are blaming some of the county’s recent flooding problems on Kentucky Power Company and its tree-cutting contractors. District Five Magistrate Wayne Fleming told the fiscal court that the contractors cutting trees in Payne Gap did not remove the trees and brush they cut from power company rights-of-way but simply dragged them to the creek bank, where they were swept into rain-swollen streams until they clogged culverts and caused flooding during recent heavy rains.

Abingdon, Va.-based Alpha Natural Resources, the nation’s third-largest coal producer, is donating a parcel of land near Marlowe for use as a site for a countywide animal shelter. The donation of land is on behalf of its Enterprise Mining Co., which has extensive operations in Letcher County.

Senior citizens from Letcher County won 30 medals at the Senior Games held in Knott County, writes correspondent Lizzie M. Wright. “Janice Foster received a plaque for walking the most miles. Ruby Caudill won for being the oldest one there. Anna Smith won a medal for being the best grandmother. She won all over the state of Kentucky, and she will receive $500 later when they have another date to give her the award and her check. Anna, we are proud of you.”

Black bears recently emerged from their dens in southeastern Kentucky and are now on the prowl for food. Garbage, food scraps, pet food and even bird feeders attract hungry bears. Simple preventive measures to keep bears away are not leaving garbage outside overnight, avoid feeding pets and wildlife with food scraps, store pet food inside, and if you see bears in your area take down bird feeders for a week.