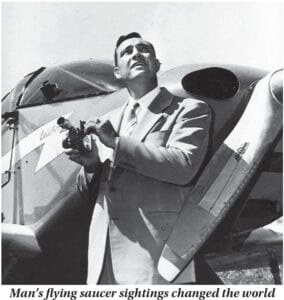 In this 1947 photo, Kenneth Arnold holds a movie camera in front of his CallAir after he reported seeing nine alleged UFOs near Mount Rainier, Washington. Arnold had no idea he would change the world when he told reporters in Pendleton he saw nine strange objects flying along the Cascades. But 73 years ago June 25, that’s what he did. (Idaho Statesman via AP)

The Isom Livestock Yards has an electronic loudspeaker that is a great aid in auctioneering livestock and in making announcements. This will greatly increase the interest in sales and prevent making minor errors that were unavoidable in the past.

Whitesburg this year will have a fine Fourth of July celebration. The sponsors are the Whitesburg business people. Mr. Bill Blair and Mr. Woodrow Dawahare are heading the list among active workers. A ball game will be enjoyed by the crowd, and races and games of all kinds will be on the program.

Jim Butcher, 30, and Bryan Back, 49, of Elk Creek, are being held without bond in the county jail facing murder charges in the killing of Wilson Fields. Sheriff Hassel Stamper said that Fields went to Back’s house “intoxicated” and that an argument started and that Fields was beaten about 9 p.m. He said that Back sent his children to get Jim Butcher, and that Fields, who was Back’s brother-in-law, fought with both Butcher and Back. Fields was believed to have been slain with the end of a metal bed railing.

Sgt. First Class Arlie Blair, of Jeremiah, recently returned to Okinawa after completion of a 30-day re-enlistment leave, which he spent in Jeremiah with his wife, Mollie, and their three children, Arlin, Deanna and Russel. Sgt. Blair is assigned as Rifle platoon sergeant with the 29th Infantry Regiment.

Fire Chief Day has announced that one of Whitesburg’s fire trucks will lead the Fourth of July parade, which will get underway at the depot at 1 p.m. He pointed out that one crew and one truck will be on duty at the fire station in case of any emergency. One crew will take part in the parade.

Mr. and Mrs. W.P. Nolan of The Mountain Eagle have returned from Detroit where Mr. Nolan was a delegate to the National Rotary Convention. While in Detroit, they were the guests of Mr. and Mrs. Willard Gay, formerly of Perry County. Mrs. Gay is the sister of Clyde Walker of The Mountain Eagle. They also visited Maurice E. White of Chicago and formerly of Letcher County.

Mrs. Corsby Hughes Francis, 39, was free on $10,000 bond after her arrest on a charge of murder in connection with the fatal shooting of her husband, A.B. Francis. Mrs. Francis said she and her husband had had a row at home and Francis had kicked her. She then went to the home where relatives were sitting up with the body of Alfred Sloane, her uncle, and her husband followed in another car. When Francis reached the Sloane home, she said, she was sitting in a car and her husband started to pull her out. During the resulting scuffle, he was shot she said.

The Letcher County Board of Education may lawfully pay off a deficit in the lunchroom account at Kingdom Come School, according to an opinion from the office of State Attorney General John J. Breckinridge. The amount involved is $202.72.

Coal industry spokesmen and area residents combined forces to convince the Letcher Fiscal Court it should oppose construction of the recent suggested Blackey Day. Responding to the courtroom full of people, the fiscal court backed away from its position a month ago that seemingly opened the door to the Blackey Dam possibility. Mark K. Marlowe, Lexington, owner of substantial coal lands in the Kentucky River area and president of both the Elkhorn-Jellico Coal Co. and the Bank of Whitesburg, made a rare appearance at a public meeting to speak against the dam. Marlowe said the mining industry in the county could be destroyed were the proposed dam to force removal or abandonment of the Louisville and Nashville Railroad from Blackey up through Whitesburg.

Several wives of the Whitesburg Jaycees met Tuesday for the first meeting of the Jayceettes. All Jaycee wives are invited to the next meeting on June 30. As their first project, the Jayceettes have been helping with the concession stand at the Friday night dances sponsored by the Jaycees.

County and state officials will meet Monday to see if Letcher County is owed enough severance tax money to clear its $202,340 debt. The state Department for Local Government informed county officials earlier this month that the county has $112,113.67 due in leftover coal severance tax money. In addition, $35,693.08 in unspent money from the county development fund will probably be returned. Before this week, Letcher County has a carryover debt of $252,340 from the 1979- 80 fiscal year, but that figure was lowered when county officials used $50,000 in severance tax funds to go toward paying bank debts. County Treasurer Ray Collins said any money received in severance tax will go toward paying off the county debt.

The first extensive commercial development along the Whitesburg Bypass was announced this week. Webb Properties, a Lexington-based real estate firm own by Letcher County natives Don Woodford Webb and Dudley Webb, has acquired a five-acre site for a proposed business park. Situated on the southeast corner of U.S. 119’s intersection with the bypass at Pine Mountain Junction, the land was purchased from the L&N Railroad. Plans for the development call for the possible location of a motel, a chain restaurant, a branch office for a financial institution and individual sites for offices and distribution facilities.

Gov. John Y. Brown announced the formation of a 30-member Kentucky Coal Policy Council, which includes two prominent Letcher County coal figures. Brown said the commission’s purpose is to “simplify the approach to mining and selling coal.” Harry LaViers Jr., president of South East Coal Co., which has extensive mining interests in Letcher and Knott counties, and T.J. Briskey, vice-president and general manager of Beth-Elkhorn Coal Corp., both were named to the commission.

A case that began in Letcher County is the basis for a state Court of Appeals ruling that parents are not responsible for the medical bills of an adult child who was not previously mentally or physically dependent. The case arose after Stephen Quillen, a 28-year-old lawyer and mining engineer, collapsed from a heart attack. He suffered brain damage and was paralyzed because of oxygen deprivation. He died about a month later. Central Baptist Hospital in Lexington filed suit in Letcher Circuit Court against Daniel Quillen of Tolson and Doris Quillen of Millstone, the parents of Stephen, for payment of $34,783 that was not paid by insurance. The court said to force parents to pay such bills for their adult children would lead to absurd results. “For example, under the hospital’s view, an 80-year-old parent would be responsible for the care and support of a 60-year-old child who by accident or disease became wholly dependent,” the court said.

The Jenkins Board of Education heard a presentation from architect James Ellis on possibilities of an addition to the Jenkins High School building, which was built in 1968. The addition would include four classrooms and a band room. The school also needs roofing to insulate it.

The Army Corps of Engineers says that the possession or drinking of alcoholic beverages at the Carr Creek Lake beach will be a federal offense, and that the new regulation will be strictly enforced. The new rules came after public complaints, increased vandalism and observations by park rangers that the use of alcohol is creating a number of problems at the beach.

The City of Whitesburg has approved a $1.3 million budget for the 1990-1991 fiscal year. The budget included large increases in the police department and fire department budgets and a small increase in the amount for general government.

A week after Letcher Fiscal Court voted to sue the state Transportation Cabinet over its failure to do $550,000 worth of roadwork in the Elk Creek area, blacktopping is underway. But it’s not the blacktopping residents had hoped for, and it won’t approach the amount set out in the state budget two years ago for the road. School buses can’t cross Carcassonne and Jent Mountain to get from Bull Creek to Elk Creek because the road is too dangerous. A Transportation Cabinet spokeswoman said the community is getting all the cabinet has money for.

The City of Whitesburg will forge ahead with plans for sewers in the Stone Avenue area, and soon after that, the Day Hollow area. The city council voted to advertise for bids on the Long Branch sewer project, which will serve 25 homes on Stone Avenue, formerly part of Long Branch. Paul Nesbitt, of Nesbitt Engineering, said the first estimate of the cost was high, and if the new estimate is right the city could take some of the grant money for Long Branch and start moving sewers up Day Hollow.

Jenkins High School’s April Damron was named the 14th Region and Section 4 Player of the Year in softball. This year, she had a pitching record of 24-7 and struck out 252 batters, with a 1.33 earned run average. She had two no-hitters, seven shutouts, and five one-hitters.

The Linefork Homemakers recently enjoyed an outing to Shakertown and a riverboat ride down the Kentucky River with Ann Bradley, Letcher County Extension Service agent.

State funding will be discontinued for the Letcher County Drug Court after July 1, rather than in January 2011 as reported at the May meeting of the Letcher County Fiscal Court. County Attorney Harold Bolling told the court at its June meeting that Program Coordinator Kellie Niece had decided to take another job, and because of Niece’s decision the state Administrative Office of the Courts has decided to cut funding to the program immediately. Bolling said the program has tremendous importance to the county. He said since the state will no longer fund it, it will also have no authority over it and if the county could find a way to continue the funding, it could run the program itself.

Goose Creek Symphony will headline the City of Whitesburg’s Independence Day celebration at River Park on July 3. The band, considered to be one of the most original groups of its time, was created in Phoenix, Ariz., in 1968.

The Letcher County Wolves are the owners of a 2-1 record after defeating the Pike County Knights 6-0 on the road. The two teams, both in their first year of play in the Alliance Football League, are scheduled to face each other again at the Wolves’ home field at Fleming-Neon on July 17.