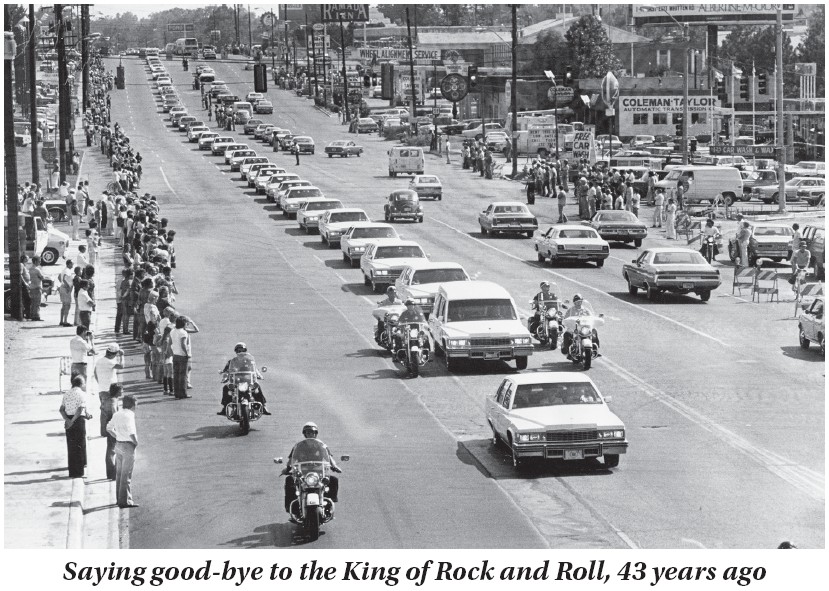 A string of white vehicles followed the hearse carrying the body of rock and roll musician Elvis Presley along Elvis Presley Boulevard on the way to Forest Hills Cemetery in Memphis, Tenn., August 19, 1977. Thousands of people lined the route for the city’s final tribute to Elvis. Presley died suddenly August 16, 1977 at his Graceland estate in Memphis. He was 42. (AP Photo)

The coal industry of Harlan County is moving at the rate of more than 1,000 cars a day, and the prospects for even greater tonnage are good.

It is with deep regret that we learn of the death of Linville Bates, one of Uncle Sam’s Army boys, at his post in Panama. Linville was a son of Mr. and Mrs. H. Bates of Ermine and had been in the Army only a few months. His death is attributed to heart failure.

The hunting season opened in Kentucky on August 15 with red and gray squirrels first on the list for the nimrods. Kentucky hunters will also enjoy 60 days of duck and wild goose shooting this fall, beginning October 16.

Lt. Klair E. Back, son of Mrs. Ella Back of Whitesburg, has been transferred to Japan as commanding officer of the 3rd Air Rescue Squadron, reporting for duty the latter part of this month.

Over 100 Rotarians, Rotary Anns, friends and guests met at the cabin of Mr. and Mrs. Virgil Picklesimer on Pine Mountain for the annual Rotary picnic. An abundance of good eats of many varieties was enjoyed by all, also horseshoe pitching, archery, singing and television added to the evening’s entertainment.

Elizabeth Taylor stars in two films showing this week at the Alene Theatre in Whitesburg. “The Big Hangover”, also starring Van Johnson, will be shown on Friday and Saturday. On Sunday and Monday, “Father of the Bride” co-starring Spencer Tracy and Joan Bennett will be shown.

Mr. and Mrs. Henry Hutton are visiting in Detroit, Mich., and Washington, D.C.

Whitesburg schools opened this week with little change in enrollment but with several improvements in procedure. Two changes of note in the grade school include division of the first grade to three classes of about 30 pupils each and division of the eighth grade by scholastic ability. In the high school, the day is divided into six periods of 60 minutes each instead of the previous five of an hour and 10 minutes each.

Letcher County women of both political parties will meet Friday to discuss the proposal for revising Kentucky’s constitution, to be voted on in November.

Marine Cpl. Chester L. Wilson, son of Mr. and Mrs. Robert Wilson of Whitesburg, is serving as a driver with the motor transport section of Headquarters Company, Fourth Marine Regiment, a unit of the First Marine Brigade at the Marine Corps Air State, Kaneohe Bay, Hawaii. He was promoted to his present rank and re-enlisted for six years July 12.

The University of Kentucky’s new Southeastern Center at Cumberland will be dedicated in ceremonies on Sunday by Gov. Bert Combs.

Despite the current boom in business for the coal industry, the economic condition of many eastern Kentucky residents continues to decline. Figures from the U.S. Department of Agriculture show that the number of food stamp recipients in June of this year was 45 percent higher than in June of last year in the eight-county Kentucky River Development District. In Letcher County, it was up 35 percent.

A HKB Coal Company truck, crossing the bridge at Seco, broke the bridge in two leaving 40 families stranded on one side of the North Fork of the Kentucky River. To make matters worse, the town’s water supply had been cut off since earlier in the day because of the failure of a pump, and the water company’s personnel could not get their equipment across the river to make repairs. County Judge Robert Collins said county road crews are working around the clock to rebuild the bridge.

Staff Sgt. Charles A. Stewart, son of Mrs. Mildred Gilley of Cromona, has been awarded the combat infantry badge “for sustained ground contact against the enemy.” Stewart is assigned as a mortar crewman with Company D, 3rd Battalion of the 4th Infantry Division’s 12th Infantry in An Khe, Vietnam. The sergeant’s father is John J. Stewart of Fayetteville, N.C.

“The old Blair Branch School burned down Sunday morning,” writes Blair Branch correspondent Callie Blair. “We hated it so, because it had been there so long. It was built in 1907. All eight of our children completed school there through the eighth grade, and most of them never missed a day of the eight years.”

In an out-of-court settlement, Blue Diamond Coal Co. has agree to pay $5.5 million in damages to the widows of 15 miners killed in the first of two explosions at Scotia Coal Co. in March of 1976. The settlement comes nearly four and half years after the twin explosions at Oven Fork in Letcher County. It covers the first explosion only, and has nothing to do with a second explosion two days later that killed 11 men who were investigating and doing recovery work after the first blast. Both explosions were caused by methane gas.

The Letcher County Grand Jury has ordered that Letcher Fiscal Court hire a county stenographer. The order came after the state auditor’s office reported that the current bookkeeping system does not adequately safeguard the county’s assets. The auditor’s office said the condition of the books made it impossible to produce reliable and accurate financial statements and that the fiscal court order book was not a complete record of court actions. The minutes of the fiscal court meetings are not written in open court but are produced from memory some time after court adjourns, said the grand jury.

“The new drive-in theater will open soon in Jeremiah,” writes Jeremiah correspondent Hassie Breeding Helton. “Everything is shaping up nicely and we know it won’t be long now.”

The state’s top economic development director has said the state will try to arrange loans to keep South East Coal Co. open, if the company asks it to. South East officials announced last week that the company may have to close its operations in Letcher, Knott and Estill counties on October 12. South East employs more than 600 people in Letcher and Knott counties.

Trash recycling will begin on a limited basis in Letcher County next month. Southern Appalachian Recycling, a nonprofit corporation formed earlier this year, announced that it will begin a pilot program of collecting recyclables in September. Interested businesses, churches, schools and neighborhoods will serve as collection points for now and will have to take the materials to a central collection point.

The Mountain Heritage Festival has stretched to six weeks this year, with celebrations in seven communities throughout the county. The festival this year will run from August 27 to October 6 with events in Whitesburg, Jenkins, Fleming-Neon, Blackey, and Isom and on the Cumberland River.

U.S. Rep. Harold “Hal” Rogers is praising Letcher County for its progress in cleaning up, citing as examples a demonstration sewer project at Millstone and sewer line extensions now beginning in Whitesburg and Neon. Rogers was on hand at Millstone August 9 for the groundbreaking for a sewer project which local officials hope is the beginning of a countywide system of sewers.

Premier-Elkhorn Coal Co. faces fines from two state agencies for a release of muddy water from a strip mine at McRoberts on August 8. Muddy water from Premier-Elkhorn’s Mine 35 rolled off the mountainside about 9 a.m. and covered the road in Little Tom Biggs Hollow before flowing back into the stream. It left behind a trail of mud and debris that a mine contractor cleaned off the road with a high-pressure water hose. The company has been notified it will receive a notice of violation from the state Division of Water and a notice of noncompliance from the Department for Surface Mine Reclamation and Enforcement.

A judge on Monday sentenced Melissa A. Niece to a year and a day in federal prison for her role in a cocaine distribution conspiracy. Niece, 30, of Van, is the wife of former coal operator Wilford Niece, who was indicted in the same case.

The six seats on the Blackey City Council come up for election in November, but no one has filed to run. The deadline for filing for the fall election passed at 4 p.m., August 8.

Former Letcher Circuit Court Judge Larry D. Collins was sentenced to 10 years imprisonment after pleading guilty to stealing money from a nonprofit organization. Collins was at the center of a public corruption scandal here more than 17 years ago, when he was charged with accepting bribes. He pleaded guilty March 25 on charges of making unauthorized purchases on the debit card of his former employer, Surgery on Sunday Inc. The nonprofit organization provides outpatient surgery free of charge to people who cannot afford health insurance and who are not eligible for state or federal aid.

The Letcher County Fiscal Court told county workers that a raise is not feasible at this time. County Treasurer Phillip Hampton told employee John Lucas, who spoke for county workers, that even a 25-cent-per-hour raise now could put workers in jeopardy of layoffs at a later time.

Country singer Daryle Singletary will headline the Riverside Days festival in Whitesburg. The three-day festival will be at Riverside Park. Opening the show for Singletary is Letcher County-based After- Shock and the 2009 Mountain Outreach Idol winner Chantal Toler.

“Wade fishing is the only form of fishing where the fisherman gets into the water and actually enters the fish’s work and can feel one on one with the river and with the fish,” writes Mountain Eagle columnist Greg “Gabby” Caudill. “You just become part of the river and can feel a bond with what you are doing.”