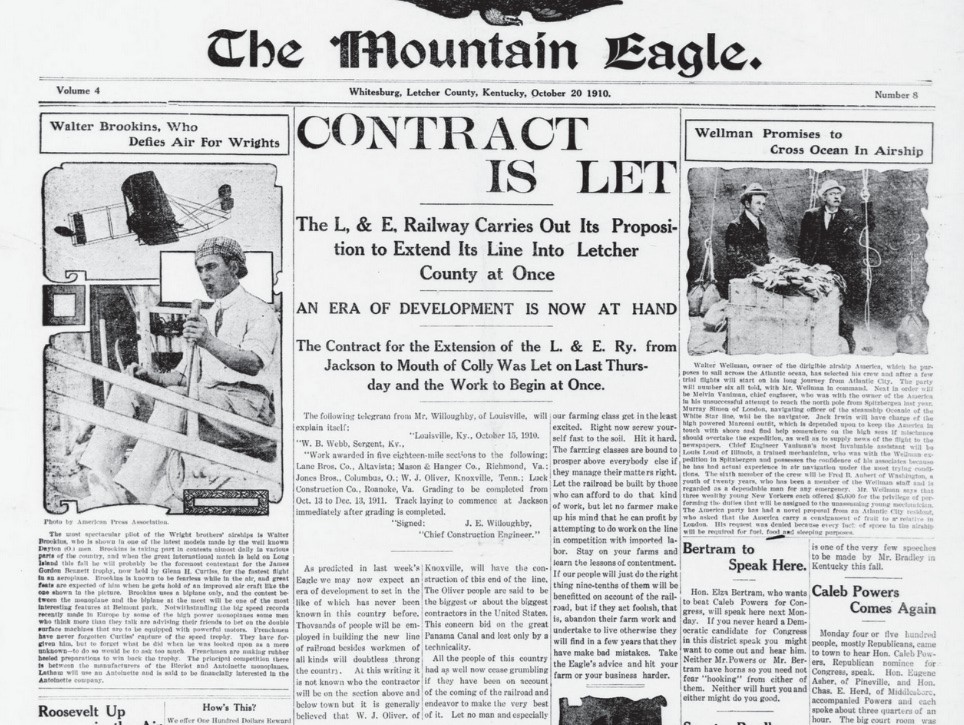 IT’S OFFICIAL! The front page of the October 20, 1910 edition of The Mountain Eagle featured a report on the letting of contracts to build the first railroad to reach Letcher County. Elsewhere in that week’s edition was news that two railroad tunnels would be built in the Whitesburg area — one at Dug Hill on the East side of town, the other near Dry Fork.

The Lexington & Eastern Railway has officially announced that contracts have been let to build a new railroad from Jackson in Breathitt County to the mouth of Craft’s Colly in Letcher County. “As predicted in last week’s Eagle we may now expect an era of development to set in the like of which has never been known in this country before,” The Mountain Eagle reports as more news about the coming of the railroad continues to dominate the front page.

Persons interested in the building of the new railroad are dropping into town almost every day and night.

It is now known that the W.J. Oliver Construction Company will build the section of railroad above and below Whitesburg.

The planned railway from Jackson to the mouth of Craft’s Colly crosses the North Fork of the Kentucky River 12 times, requiring 12 steel bridges. There are six tunnels along the route, two of them in Letcher County. One tunnel will be built above Whitesburg at Dug Hill below Hiram Williams’s place. The second tunnel will be built below town near the mouth of Dry Fork.

John Ison of Kingdom Come has bought two lots in the Frazier Addition of Whitesburg for $500. It is said that Mr. Ison will erect a large hotel on the property in the near future.

President Roosevelt may have his critics both in and out of the Democratic Party, individual business leaders may be strong in their denunciation of him and many of his politics, but he is still “tops” with the youngsters. State campaign headquarters for several weeks now has at times been swarmed with youngsters between the ages of six and 15 all seeking Roosevelt buttons and other campaign gadgets.

The Masonic Lodge of Clintwood and Clinchco is sponsoring a football game, Hiawassee vs. Bluefield, to be played at Clinchco on Saturday. Hundreds of fans are expected to attend and a lively game is anticipated.

Thurman L. Hibbits, a young Jenkins man who was only recently admitted to the Kentucky Bar Association, called at the Mountain Eagle office getting his stationary and office supplies. Young Hibbits has hung his shingle out at East Jenkins and will welcome new clients who are in need of legal advice and representation.

Funeral services for Kenneth Combs Jr., 18, son of Mr. and Mrs. Kenneth Combs, Whitesburg, were held last week. Combs, a Harlan fireman, was killed recently when the rig he was riding on a fire call overturned. He had been employed by the Harlan Fire Department for two years.

First- and second-place national championship honors were won by two Letcher County First Aid Teams in a meet held at Pittsburgh, Penn. First-place honors went to Mine 204, Jenkins, with Blaine Sexton as captain, while second-place laurels were taken by Mine 214, McRoberts, with Warnie Flint, Jr. as captain.

Pvt. Wallace Hall, 18, son of Mr. and Mrs. Marvin Hall of Deane, has reported to Keesler Field, Mississippi, to begin training in the Air Force Radar School. The training will qualify him to maintain the Air Force radar equipment.

“House of Dracula” is playing this weekend at Isaac’s Alene Theatre in Whitesburg.

“It is time for the people of Letcher County and eastern Kentucky to stop and think seriously about what we are doing to ourselves,” says a Mountain Eagle editorial. “I am convinced that we, as a people and an area, are through strip mining embarked on a course that can lead only to death for the area. … To my mind, there is no possible justification or excuse for strip mining in the mountains. … There are estimates that during the next decade or so up to 90 percent of the hillsides in Letcher County will be stripped. I know of no reason to doubt this estimate. The land will be worthless, once stripped, and so it is reasonable to expect that it will be abandoned and removed from the county tax rolls. And so the county, now always broke, will wind up a pauper.”

The Boy Scouts of America are going to visit the homes in this area between now and Nov. 8. They are placing reminders to all Americans to vote for the candidates of their choice on Nov. 8.

A delegation of students from Jenkins High School will participate in Transylvania College’s fifth annual model United Nations assembly. The Jenkins students will represent Belgium at the meeting.

Residents of Letcher County areas, where drilling for oil and gas rigs is going on, say that oil and gas companies are causing extensive land damage and pollution without making reparation.

Two new school buses, at a cost of $7,700 per bus, have been purchased by the Letcher County Board of Education for use on the Cumberland Valley to Whitesburg route for school children over Pine Mountain. The action comes after several weeks of controversy which at one point saw parents of high school students in the Cumberland Valley section of the county refuse to allow their children to go to school on what they regarded as unsafe, old buses drive by incompetent drivers.

Former Eastern Kentucky anti-poverty worker Alan McSurely was sentenced to a year in jail and his wife Margaret to three months for contempt of Congress by a federal judge. The McSurelys are free on bond pending appeal. The couple, former field workers with the Southern Conference Educational Fund, were indicted for contempt for refusing to deliver personal papers and letters that had been subpoenaed by the Senate Permanent Investigations Committee.

County Attorney Guy Palumbo has obtained an injunction against members of the Letcher Fiscal Court after three of them failed to show up for the court’s October meeting. Circuit Judge F. Byrd Hogg ordered the magistrates to hold a special meeting to take care of “urgent and routine county business.” Magistrates Add Polly, Arthur Adams and Charles Dixon all failed to attend the regular court meeting.

Dr. Grady Stumbo, Kentucky Commissioner of Human Resources, proposed major changes in the Emergency Medical Services system, which provides ambulance service to residents of 42 eastern Kentucky counties. He said 40 percent of the agency’s transportation runs were transporting patients, and on those runs there was “no need for a $22,000 vehicle and two EMTs (emergency medical technicians)”.

Kentucky has received more than $13 million from the federal Department of the Interior to be used to finance the state’s interim surface-mining regulatory program.

Mountain Eagle correspondents report that people at Isom are busy gathering firewood. Curt Helton of Blair Branch grew some three-pound sweet potatoes, and Linefork is noticeably quiet since so many miners are on layoff.

Letcher Circuit Judge Byrd F. Hogg says he isn’t going to stand by while gas and oil companies “run roughshod” over property owners. This week Hogg delivered a strong courtroom lecture to Equitable Resources Exploration. Hogg’s comments came in a hearing to determine whether Letcher County Sheriff Steve Banks should be ordered to arrest people who have been blocking the company from moving its drilling equipment along the Cram Creek-Pert Creek road. Hogg didn’t rule on the request by the company, but set another hearing for today to consider whether to amend the temporary restraining order for those blocking the road.

South East Coal Co. plans to stay in business despite a mass layoff and filing for Chapter 11 bankruptcy protection, says company president Harry Laviers Jr. This month, South East laid off 400 workers in three eastern Kentucky counties and filed the bankruptcy petition. The company has blamed its problems on an expensive lawsuit with its largest customer, Kentucky Utilities Co.

The Nature Conservancy plans to make the property it is buying at Bad Branch Falls a “showcase of conservation,” said Barry Dalton, stewardship director of the Kentucky chapter. The Conservancy’s purchase of 1,023 acres in the upper watershed of Bad Branch added to the 602 acres already owned by it and by the state will make the area the largest nature preserve in Kentucky. It will also solidly position Bad Branch Falls as home to the largest concentration of threatened and endangered species in the state.

Proponents of a 3,000-mile interstate highway that would run near Jenkins say it would stimulate tourism and business along its route. The House has approved legislation that would appropriate $1.27 million for a study on extending Interstate 66 across the country, through nine states.

Wilford Niece apologized before a federal judge last week for his role in a cocaine dealing operation in Letcher County, and was sentenced to 10 years in prison. The former coal operator pleaded guilty to a charge of conspiracy to possess with intent to distribute cocaine, and to a charge of receiving stolen property related to vehicle chop shop operation.

Asia lady beetles have returned to Letcher County with a vengeance, coating the interior of many houses with their bulbous little descent bodies and generally making a nuisance of themselves.

Members of the Whitesburg High School Class of 1937 assembled at the Springs Inn of Lexington for a class reunion. Dr. Chad Mullins served as master of ceremonies. Twelve class members were in attendance. The event ended with plans being made for another reunion in 2001.

The City of Whitesburg says it will no longer tolerate speeding on downtown streets. At the October meeting of the Whitesburg City Council, Mayor James Wiley Craft asked the council to approve the purchase of two hand-held radar units for use by city police officers and said he had spoken with the Kentucky Department of Highways about getting speed limit signs put up.

“There is something for everybody this time of year outdoors,” writes columnist Greg “Gabby” Caudill, “and the bass fishing has already started getting better.”

A Safe Night Halloween celebration will be held October 30 at River Park in Whitesburg. The event will include a haunted house at the picnic shed.