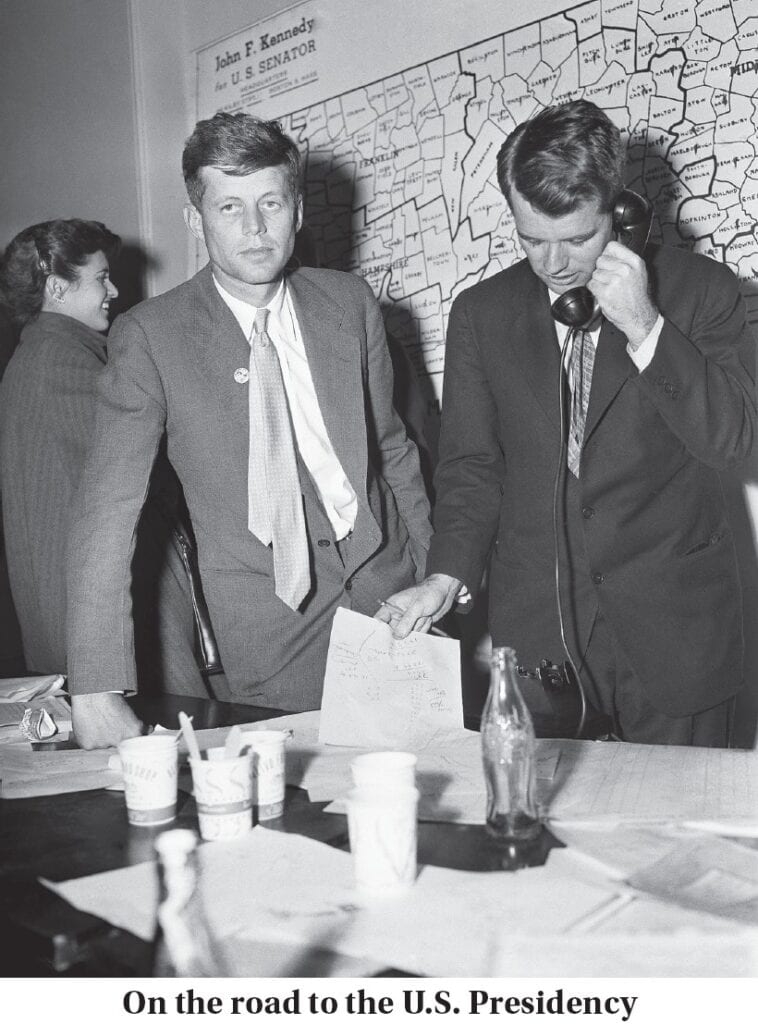 Sixty-eight years ago this week — on November 4, 1952, U.S. Representative John F. Kennedy, a Democrat from Massachusetts, was photographed waiting out election returns which later indicated he won U.S. Senate seat held by Henry Cabot Lodge Jr. Kennedy went on to be elected the 35th President of the United States on November 8, 1960. On November 22, 1963, Kennedy was killed by an assassin’s bullets while riding in a motorcade through downtown Dallas, Texas. He was 46 years old. (AP Photo)

Mrs. J.W. Moss, wife of Seco physician J.W. Moss, died of what is being called an accidental poisoning at the couple’s home. Mrs. Moss was the mother of four-year old twin daughters and an 11-year-old son. She is said to have been suffering from a severe headache when she reached into her husband’s medicine case and took two tablets she thought were the painkiller Phensal but were instead two pills that contained bichloride of mercury.

Jenkins High School’s gridders played their best game of the season here Saturday when they defeated Coalwood, West Virginia, to the tune of 34-7. “Little Red” Horner and “Big Red” Horner were among the stars for Coach Roger Womack’s team, which is the best team Jenkins has placed on the gridiron for a long while. After the game was over, the young people of Jenkins gathered at the Jenkins Clubhouse and danced the night away to the sounds of a grand orchestra from Chicago.

At least 43 Letcher County residents were in Lexington last Saturday as part of a crowd of 24,000 that watched Alabama defeat the Kentucky Wildcats football team, 19-0.

Three young Hindman men were killed last Friday afternoon in a car crash between Winchester and Lexington. The five were killed while traveling to Lexington for the Kentucky vs. Alabama football game when a car pulled out in front of the vehicle in which they were riding. Killed instantly when the car in which they were riding burst into flames were Wendell Smith, 23, and Crit Wallen, 26. Hagan Smith, 24, died on the way to Good Samaritan Hospital. Two other passengers in the car, William R. Smith, 24, and Hiram Stamper, 25, are now being treated at Good Samaritan Hospital. Both are in very serious condition.

Franklin D. Roosevelt, Henry A. Wallace and A.B. “Happy” Chandler were all re-elected to office. Unofficial results show President Roosevelt with 6,126 votes in Letcher County, and Wendell Willkie with 4,405 votes.

The word was current on Saturday evening that John Hall, son of Will Hall, was badly hurt in the mines at McRoberts and taken to the hospital at Jenkins. From information gathered, it seems that Hall was struck and run over by a mine car. His left leg, below the knee, was cut off and he is otherwise seriously, and most probably fatally, injured. On Tuesday, young Hall was still alive though a very sick man. The physicians have some hopes for recovery.

“Most of the men who were put on the unemployed list at the termination of several of the projects of the W.P.A. last spring are still unemployed and here comes winter,” writes Lower Rockhouse correspondent John Q. Adams. “Some think it is politics and some think it is prejudice and still others don’t attempt to think or at least don’t exercise their will. Those men are in most cases in need. It seems that the great hold up is in the sponsor’s contributions. The county and locale are not putting up that 25 percent that is required by the W.P.A. Why can’t something be done so that the money we so badly need can be brought into the county by check from the W.P.A.?”

Letcher Countians cast their support at the voting polls to Earle C. Clements for Senator, and Carl D. Perkins for Congressman from the Seventh Congressional District. Clements won Letcher County with a 713 majority over his Republican opponent Judge Charles Dawson by receiving 3,800 votes to Dawson’s 3,087. In the Congressional race, returns indicate a decisive victory for Perkins with 21 precincts still unreported. The incumbent Perkins was 7,402 votes ahead of Dr. O.W. Thompson, Pikeville Republican.

The largest induction call, 17 boys to go in one day, will leave November 16 it was announced this week by the local draft board. Also scheduled to leave next week is a pre-induction group of 26 boys, including three from Whitesburg and four from Jenkins.

Tex Ritter, America’s most beloved cowboy, will appear live on stage with his new western revue Thursday at Isaac’s Alene Theatre. His film “Take Me Back to Oklahoma” will also be shown.

The Jenkins Cavaliers defeated Bell County High, 13-0, in a sea of mud Friday night at the Jenkins Athletic Field. The Whitesburg Yellow Jackets downed Belfry, 20-0, in the closing quarter of their game to give the Jackets their sixth victory of the season.

The Republican presidential ticket carried Letcher County by a margin of 113 votes in Tuesday’s general election and carried Kentucky by a total of 59,109 votes. But in the nation as a whole, the Democratic nominee, John F. Kennedy, was the choice over Richard M. Nixon for the office of 36th president of the United States.

“House on Haunted Hill” starring Vincent Price will be shown this week at Isaac’s Alene Theatre in Whitesburg.

Mrs. Macie Duncil Warf has been appointed Sheriff of Letcher County, filling the vacancy caused by the death of her husband, R.C. “Tip” Warf. Officials said Mrs. Warf will serve by appointment for a year, until a successor to her husband can be elected in a special election. Warf, 60, died about midnight Saturday night at the Whitesburg hospital where he was taken after suffering an apparent heart attack. s

Twenty-one arrests were made at the mouth of Pine Creek in Mayking late last Saturday. Sixteen juveniles and five adults were arrested by state police on charges of disorderly conduct and public drunkenness. Letcher County law officers had had two previous complaints about the same group.

Dawahares Inc. is holding a four-day observance of the opening of its greatly enlarged store in Whitesburg. The store has been more than doubled in size, and completely remodeled.

Marine Sergeant Harold D. Hensley, son of Mr. and Mrs. Curtis L. Hensley of Whitesburg, was promoted to his present rank while serving at the Marine Corps air station in Jacksonville, N.C.

Letcher County Democrats were jubilant Tuesday night when election returns showed they had carried the county for Jimmy Carter in his bid for election to a second term as President of the United States. But their joy was short lived as national returns showed Carter losing heavily to Republican Ronald Reagan. s Carbon monoxide poisoning has been ruled the cause of the tragic Halloween deaths of a Letcher County boy and girl. Hester Katie Owens, 16, and Jimmy Dale Frazier, 20, were found dead near the Harlan County line on Little Shepherd Trail early Sunday morning. The two bodies were discovered sitting up in a parked car by two hunters who were passing by. The couple apparently died after they had parked their car and left the motor running. A hole left in the trunk of the car after the installation of a shock probably permitted the exhaust fumes to enter the car, said Letcher County Coroner Charles Day.

Billy R. Napier, son of Mrs. Stanley Napier of Hindman, has been promoted in the U.S. Air Force to the rank of master sergeant. Sergeant Napier is a maintenance expeditor at Fairchild Air Force Base, Wash.

Mrs. Earsie “Granny” Blair, 77, of Letcher, was killed and Mrs. Lula Smith, 79, was injured when a loaded coal trailer came loose from the tractor pulling it and struck a pickup driven by Mrs. Blair head-on. Mrs. Smith was a passenger in the pickup.

The Letcher Fiscal Court has asked Indian Creek residents to give it until its November meeting to work with coal companies to improve their road. About 10 people from Indian Creek blocked the road up the hollow last week to protest the dust caused by coal trucks traveling up and down the road.

Anthony Wade Amburgey, 18, is now serving with United States forces in Saudi Arabia. He is a son of Ted and Sue Amburgey of Roxana and a grandson of Laura Amburgey, also of Roxana. He is a graduate of Whitesburg High School, where he served in the JROTC.

“Sibling Rivalry” and “Quigley Down Under” are being shown at the Whitesburg I and II movie theaters.

Donald Ray Hall, a Letcher Jail inmate, broke out of a fenced-in recreation area on the roof of the courthouse and slid down a flagpole to his freedom. Hall, who was being held on a variety of charges including assault and kidnapping, was one of about 10 inmates using the rooftop recreation area at the time he escaped.

Water was still draining from inside the Parkway Restaurant near Whitesburg Saturday, just hours after firemen extinguished an early-morning blaze believed to have started in the bathroom of an upstairs apartment. No one was home in the apartment when the fire began. A motel adjacent to the restaurant was not damaged by the flames.

A new furniture factory at Isom plans to start manufacturing by December 1. Company officials say that Mountaineer Furniture Manufacturing will open its doors and begin operations within a month. The first employees will be hired in the next week, and the company, which is owned by Tim Breeding of Isom, could employ as many as 100 if it gets enough orders.

Workers from Johnson’s Masonry of Grapevine removed the outer layer of bricks from a side of the Whitaker Bank building in downtown Whitesburg. Some of the bricks were buckled and broken and needed to be replaced. By removing the bricks, the workers revealed an inner layer of old bricks, which will soon be covered up again by new bricks.

SSgt. Jennifer Deniz was promoted to gunnery sergeant while serving in Afghanistan. She is the daughter of Ray and Angie Jensen of Payne Gap, and the granddaughter of Irmgard Jensen, also of Payne Gap. Deniz is a 1998 graduate of Jenkins High School and has served in the Marine Corps for 12 years.

Lisa Frazier, a student at Letcher County Central High School, has been named the 14th Region Player of the Year by the Kentucky Volleyball Coaches Association.