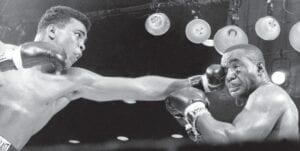 Cassius Clay shocked the boxing world this week in 1964 In a fight that would later be named as the fourth-greatest sports moment of the Twentieth Century by Sports Illustrated magazine, challenger Cassius Clay, a 7-1 underdog, throws a straight left to the face of Charles “Sonny” Liston in third round of their heavyweight championship match at Convention Hall in Miami Beach, Florida, on Feb. 25, 1964. The 22-year-old Clay, of Louisville, defeated Liston in a technical knockout to become the world heavyweight champion. Clay, who would later be known as Muhammad Ali, went on to defeat Liston a second time on May 25, 1965, launching him to one of the greatest boxing careers of all time. He had 56 wins against only six losses when he retired from the ring in 1981. Ali died in 2016. (AP Photo)

Linefork correspondent “Mama’s Baby” reports that the community saw its “biggest tide in years a few days ago,” adding that Bug Holcomb “killed a fine wild hog recently,” and that “some big meetings” are being held in Sugar Grove.

Doctors Fitzpatrick, Venters and Bentley have amputated the leg of a young (black) man who was injured at the Dogget & Doughty Camp No. 1 at Sandlick.

Bona Banks is not dead. Banks, who lives about two miles below Whitesburg, suffered a fainting spell so bad last week that his neighbors thought he had died and phoned the news into town just in time to make last week’s edition of The Mountain Eagle. However, the Eagle is glad to inform Mr. Banks this week that he is not dead, as his long fainting spell ended shortly after last week’s edition went to press. “Viewed one way it is a right serious thing to publish a man dead when he is not but after all there is a funny side to most everything,” The Eagle notes of its mistake. “Life is one round of laughter and tears.” 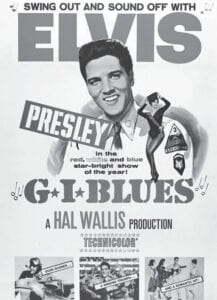 “GI Blues,” a movie starring Elvis Presley, opened at the Alene Theatre in Whitesburg for three days on March 5, 1961.

The Whitesburg Market House is buying locally produced eggs for 15 cents per dozen; hogs at nine cents per pound; cattle, on foot, for two and one-half cents per pound; green apples for 85 cents a bushel, and soup beans for two cents per pound. The Market will not buy sheep at any price.

A January 1, 1911 ruling by the U.S. Post Office makes it illegal to mail a letter by first-class mail if the sender’s name and address is not included in the upper left-hand corner of the envelope.

March 9 is the day for the big sale of 114 lots in the new town of Colly, located 2-1/2 miles above Whitesburg near Ermine on the North Fork of the Kentucky River at the mouth of Colly Creek. The town is being built on the new line of the Lexington & Eastern Railroad.

THURSDAY FEBRUARY 26, 1931 A special showing of the movie “The Sea Wolf” will take place on March 3 at the Jenkins Theatre. Admission is clothing of some kind, either old or new. No cash will be accepted. The clothes will be distributed among the needy families of the community.

The Douglas Day Post 152 of the American Legion will hold its next monthly meeting in Whitesburg on Friday, March 18. Emery L. Frazier, the adjutant and service officer, says all ex-service men are invited.

Letcher County Sheriff J.M. Potter has arrested three brothers — Arthur, Boyd and Carl Caudill — on charges of burglarizing the Frazier Wholesale Company store at Elsiecoal. Once the three brothers were brought to Whitesburg, two of them — Boyd and Carl — confessed to breaking into the store, but said Arthur had no part in the burglary. However, Arthur is being held on a charge of running a moonshine still at UZ.

A town without up-to-date motion picture theater is a dead town, says a Mountain Eagle editorial encouraging citizens to support the Kentucky Theatre in downtown Whitesburg.

THURSDAY FEBRUARY 27, 1941 A fire broke out in the home of Mrs. Princie Quillen of Neon, supposedly caused by defective wiring, and completely destroyed the house and all its contents. The fire spread to Aunt Adeline Bentley’s home, also destroying it. The Fleming and Jenkins Fire Departments were called, and soon got the fire under control. No fire insurance was held on either house.

Hiram Williams was arrested again Sunday by Deputy Wm. Cornett and Ballard Stidham on warrants of operating a roadhouse without a county permit and a second charge of aiding and assisting a prisoner in an attempt to escape. Deputy Cornett reported that in their Saturday night patrol Shafter Williams, brother to Hiram, was arrested in the roadhouse at Duane and lodged in the county jail, being charged with being drunk and moonshine whiskey in his possession.

Among those declaring their candidacies for county offices are J. Mart Potter, Tilden E. Mullins and Shellie Lequire for sheriff; Lee Adams and Georgia Vaughn for county court clerk; and J. Marion Blair for tax commissioner.

From The Mountain Eagle’s sister publication The Neon News: FRIDAY FEBRUARY 28, 1941 Employees and officials of Elk Horn Mine No. 2 are rejoicing over their safety record for the year of 1940, having been awarded a bronze plaque in recognition of their accomplishment by the Big Sandy Elk Horn Coal Institute.

Harold Gilmer, 20, of Defiance, was killed instantly and his brother, A.E. Gilmer, was taken to Hazard Hospital with minor injuries last Saturday when the automobile in which they were riding was struck by a northbound passenger train at the Jeff railroad crossing. A.E. Gilmer said he was driving the car toward their home and he did not see the train until he was practically upon the rails.

The Fleming-Haymond road has just been resurfaced with a heavy coat of red shale and is now in first class condition — this road is now being used as a detour to Fleming, McRoberts, Neon and Hemphill while the bridge across Wright’s Fork near Neon Junction is being rebuilt.

Mr. and Mrs. Ted Tolliver are still in Seco Hospital after being seriously injured about two weeks ago by an explosion of a gristmill at their home. Mrs. Tolliver is recovering nicely, and Mr. Tolliver now has a fair chance for recovery.

THURSDAY MARCH 1, 1951 Pfc. Glenn Walker, of Walkertown, was killed in action in Korea. Pfc. Walker was the brother of Clyde Walker, linotype operator for The Mountain Eagle, and was 18 years old. He had been in the service for a year and a half. He had seen considerable action in all major Korean engagements.

Stuart Robinson moved into the semifinals of the 53rd District Tournament last night by defeating Kingdom Come, 42-20, in a ragged game hardly typical of tournament play. For the Eagles, it means the third crack at Whitesburg, tournament favorite, in the semifinals. The two teams split a pair played during the regular season.

“Spoilers of the Plains” starring Roy Rogers will be shown at Isaac’s Alene Theatre this weekend.

THURSDAY MARCH 2, 1961 All of Letcher County except the Jenkins area apparently will be without bus service after this week. Cumberland Coach Lines closed its Whitesburg station on Tuesday after it applied to the Kentucky Department of Transportation to abandon most of its franchise. An informed source said buses would not run after Friday.

Southern Bell Telephone Company is going to remove its wires from Main Street, at no cost to the City of Whitesburg. The wires should all be gone from Main from Webb Avenue to the railroad within about three years, Southern Bell representative Jack Stone told members of the Whitesburg Community Development Association. Stone said he and other Bell officials realized Whitesburg would soon need a “major cable relief” program which will replace the company’s cables which are about loaded to capacity and the cables could be moved to back streets. Earlier the company has said it would cost Whitesburg $10,000 to move the wires.

Steven C. Sexton, assistant coach and mathematics teacher at Whitesburg High School, has received a grant of $4,000 from the National Science Foundation to attend the University of North Carolina during the academic year of 1961-62. While at UNC he will finished the work required leading to a Master of Science Degree in mathematics.

THURSDAY FEBRUARY 25, 1971 Direct distance dialing is expected to be placed in effect in the Letcher County area during July. The July changeover is expected to include Elkhorn City, Feds Creek, Freeburn, Jenkins, Neon, Stone, Virgie and Whitesburg.

Strip mine operations in the upper end of the county appear to be partially pulling out. Some work which had been planned by the newly formed McCulloch Consolidated Coal Co. in the Elk Creek and Caudill’s Branch areas has at least been delayed. According to Hazard Reclamation office director Bill Hayes, “The jobs have been watched very closely by us.”

Society which said MCHC was asking for construction of health facilities that are not needed here.

If it thunders in February, it will frost in May, reports Ice correspondent Siller Brown. “How wonderful is nature, which man cannot rule.”

The bridge crossing Rockhouse Creek in Jeremiah collapsed under the weight of a truck hauling gravel across it.

WEDNESDAY FEBRUARY 27, 1991 West Whitesburg Elementary School parents are hoping to elect representatives to the new school council next week. The school was only one of two in the county to vote for school-based decision-making. Hemphill Elementary School teachers also voted for school-based decision-making, but neither they nor parents of students there have decided when to hold the elections for representatives.

The Nature Conservancy will hold its first hike to a new section of Bad Branch Falls Nature Preserve this spring. The private conservation group last year bought 1,207 acres of land including much of High Rock, a huge cliff line located in the upper watershed of Bad Branch on the ridge of Pine Mountain.

WEDNESDAY FEBRUARY 28, 2001 Letcher County School Superintendent William Kinzer will retire at the end of June. Kinzer, who has been superintendent since July 1, 1977, has notified the Board of Education that he will not seek a contract renewal.

A federal grand jury has

indicted Larry Ison, of Roxana, in connection with a mine accident four years ago in which a miner was killed. Ison, then a foreman at Fox Mining Corp.’s No. 1 mine at Skyline, is accused of using a non-qualified employee to do electrical work at the mine. Miner Paul Dean Campbell, who was not a certified electrician, was killed while working on a 995-volt electrical receptacle for a continuous mining machine.

Friday, March 2, marks the birth of one of America’s most beloved children’s authors, Theodore Seuss Geisel, better known as Dr. Seuss. To celebrate, the Student Virginia Education Association at the University of Virginia’s College at Wise in Wise, Va., will host a pajama party for children eight years old and younger.

WEDNESDAY MARCH 2, 2011 Letcher County Public Schools Supt. Anna Craft told the Letcher County Board of Education this week that financial uncertainties prevent local school officials from knowing exactly what next year’s budget will look like, and the board won’t be able to give schools a complete staffing allocation plan until May. Craft said that $298,000 was recently cut from the budget by the state and the Support Education Excellence in Kentucky (SEEK) funding will be $100,000 less next school year.

The U.S. Environmental Agency and the U.S. Justice Department announced Tuesday that Arch Coal Inc., the second-largest supplier of coal in the United States, has agreed to pay a $4 million penalty for alleged violations of the Clean Water Act in eastern Kentucky, southwest Virginia and West Virginia.

Students at McRoberts Elementary School were given the opportunity to speak with R.L. Stine, one of their favorite authors, during a video conference held in the school’s gymnasium. Susie Duncan, the school librarian, called Stine, the author of the “Fear Street” and “Goosebumps” horror fiction series, on Skype.