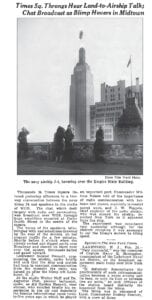 The Letcher County Health Department reports that it treated 101 county residents for venereal diseases during the month of February. The department also reports treating one case of scarlet fever and six cases of smallpox. s

Nineteen students from Letcher County are enrolled at Eastern State Teachers College in Richmond for the second semester. s

Earl Palmer has left his job as manager of the A&P Store in Neon. He will now take charge of a store in Winchester. s

“Merchants and businesspeople, of course, made no money in February,” Mountain Eagle editor Nehemiah Webb writes about the depression that is now enveloping the United States. “… It’s a fight, a battle royal, to stand on both feet under such conditions, and whoever comes out sound above-board and standing on deck is a hero.” s

In four years, the Marlowe School has grown from a one-teacher to a four-teacher school. The school now has running water.

Jimmy Hatfield, 38-year-old deputy constable, received without emotion last night a verdict convicting him of the murder of Wm. F. Stock of Williamson, W.Va. and sentencing him to 12 years in the state reformatory. s

From The Mountain Eagle’s sister publication The Neon News:

The 53rd District Tournament will be played on March 6-7-8 at the Fleming Gym with Stuart Robinson, Jenkins, Fleming and Whitesburg battling for the District Championship. s

Estill Hogg was in town on Monday and dropped by the Eagle office to officially announce that he would not be a candidate for county court clerk, due to the fact that he had been drafted for one year’s training in the U.S. Army. s

From the Stuart Robinson School news: “Many will be interested in knowing that Edith Caudill, of Jeremiah, is to be valedictorian of our class of 1941, and that Martha Adams, of Crown, and Bessie Greer, of Daisy, tied for second place.” s

A few nights past, stray dogs got into Ben E. Craft’s sheep and killed five ewes and badly chewed a ram that may die. Ben has sworn vengeance on all dogs caught on his place. The damage done was estimated at $100.

A crackdown on traffic and other violations was urged this week by members of the Whitesburg City Council. Councilmen favored stricter ticketing for meter violations and red-light runners. From now on, they said, cars parked at meters with the violation tag up will be ticketed. Another crackdown, this one on poolroom operators, may be in the making. Complaints from parents to councilmembers may cause the city to take action to restrict local poolrooms. The complaints deal with permitting minors to play pool without written permission from their parents; that operators are allowing gambling; and that by staying open late at night poolrooms are causing disturbances. s

The United States Air Force announces the promotion to the grade of technical sergeant of Paul Tolliver, son of Mr. Dennis Tolliver, Whitesburg. Sgt. Tolliver served with the 1st Airlift Task Force Headquarters during the airlift to the city of Berlin after joining the occupation forces in February 1949. He is now assigned to Headquarters and Headquarters Squadron, 36th Fighter-Bomber Wing. s

The champion grade school speller for Letcher County is Delores Potter of Hemphill School. Miss Potter was crowned Saturday after a four and one-half hour spelling grind at the grade school auditorium. s

The Whitesburg Yellowjackets defeated the Stuart Robinson Eagles, 59-20, to enter the finals in the 53rd District Tournament.

Funeral services for Mrs. Myrtle Webb Boise, 67, will be held at the Graham Memorial Presbyterian Church March 10. Mrs. Boise is a daughter of the late N.M. Webb, founder of The Mountain Eagle, and Mrs. Ellen Webb, Whitesburg. She made her home with Mrs. Webb for the past several years. s

Seventy-one Letcher County residents have filed papers seeking political office this year. That is one in every 300 residents. s

Vocational agriculture classes will be offered next year at Whitesburg High School and perhaps at Fleming-Neon and Letcher high schools. The state Department of Education already has given tentative approval for the course at Whitesburg and there is a chance Letcher and Fleming-Neon also may have the course. All would be financed by state and federal government funds at no cost to the local school board except providing a place to hold classes. s

The Whitesburg Yellowjackets finished first in the district tourney, defeating Jenkins for the title. The two teams will meet again tonight at Hazard in the regional tournament.

United Mine Workers of America President W.A. “Tony” Boyle was indicted by a special grand jury Tuesday on 13 counts of embezzlement, conspiracy, and making illegal political contributions from the UMW treasury. Boyle was charged with embezzling $5,000 from union money, and conspiring to embezzle and to make political contributions totaling $49,250 between 1966 and 1969. He was also cited on 11 counts of making political donations to a number of both Republican and Democratic candidates, including$ 30,000 to 1968 Democratic presidential candidate Hubert Humphrey. s

If adopted and enforced, federal safety standards for surface-mined areas are expected to have a major economic impact on strip-mine operations. Of 47 surface mine fatalities in 1970, eight were caused by hauling accidents, 16 by machinery. Collapsing highwalls killed nine persons, and seven workers were electrocuted. Among the new regulations is one that would require scaling or stripping of overhanging rock materials. Another would restrict men from working between equipment and pit walls. Warning devices, traffic rules and signals would be required for haulage operations. Automatic warning devices must sound an alarm when moving equipment is put in reverse. s

Montgomery Ward Co. will open a catalog sales agency in Whitesburg on March 25. The store will be located in the H.B. Reedy Building, and will be owned and operated by Carter Bradshaw. s

The Department of Highways has announced it will hold a hearing April 8 regarding the proposed Whitesburg bypass. The proposed routing of the bypass will force 28 Whitesburg families to give up their homes.

Improvements to a second Letcher County water system are endangered by proposals of the Reagan administration to eliminate money for the Appalachian Regional Commission. The second system is the Jenkins water system, which is scheduled to get $85,200 in ARC money to help with construction of a new water storage tank to replace one which burst two years ago. A larger grant to Fleming-Neon already has been recalled and U.S. Rep. Carl D. Perkins has appealed directly to the White House for help in getting the project built. s

At least 500 eastern Kentucky miners are expected to travel to Washington, D.C. Monday to take part in a demonstration planned by the United Mine Workers of America to protest the Reagan administration’s proposed cuts in black lung benefits. UMWA President Sam Church called the march to show the union’s concern over the plan, which could reduce benefits as much as 88 percent. s

“We’ve been watching and listening for some indication that the Reagan administration is not the total national disaster it seems to be. But the Reagan era becomes more and more incredible each day,” says a Mountain Eagle editorial. “… Each time we think the new proposals have gone about as far as they dare for now, along comes another Reagan official with yet another scheme for doing away with … well, you name it, it’s on the list. What we have at hand is a revolution — a revolution against the government led by the government itself. Quite simply, Reagan proposes to repeal 20th Century America … They would repeal, tear up, eliminate, defund, just about every program of every President since somewhere around 1900 … The nation is about to be torn apart. The nightmare continues.” s

Unemployment during January in Kentucky was the highest since the Depression year of 1940, state statistics show. January’s unemployment rate rose to 10.5 percent in Kentucky, up from a revised 7.4 percent rate posted in December.

A mining company warehouse at Isom went up in flames this week, despite the efforts of four fire departments. One fireman suffered minor injuries while fighting the blaze, which destroyed the Big Elk Creek Mining Company’s office and warehouse located on KY 15 at Isom. Stephen Campbell, a captain at the Letcher Volunteer Fire Department and Rescue Squad, said the flames were fed by grease, oil and other substances. He said a watchman at the warehouse said the fire seems to have started near the used-oil furnace used to heat the building. s Library patrons and library workers have voiced support for buying the Hobbs building in WhitesburgPublished: February for a proposed25, 1931 new libraryCopyrightto be© ThenamedNew YorkforTimesLetcher County author Harry M. Caudill. The alternatives are the Ammerman building, also known as the school bus garage, and a new building on a different site. Library workers who had originally favored the Ammerman building changed their minds when they saw the floor plans architect William Richardson had drawn for the two buildings. s

Construction of US 23 at Jenkins could begin in April. Jenkins city councilman Ray Howard, who is employed as a telephone company lineman, said the utility companies are in the process of moving their lines now. He said the construction is to begin at Number Three Hollow and go into Beefhide. s

Nora Asher of Lexington, former postmaster at Letcher, recently celebrated her 86th birthday. Mrs. Asher was postmaster in the Letcher Post Office for about 50 years.

On Sunday, several dozen Letcher County residents traveled to Bottom Fork before daybreak to watch state wildlife officials bring four elk bull calves and 47 elk cows and calves on property owned by Sally Webb Caudill and her son, Clint Webb. According to an official with the Kentucky Department of Fish and Wildlife Resources, 238 free-roaming wild elk have been released in southeastern Kentucky this year. At this time last year, 700 elk had been released in Bell, Breathitt, Clay, Floyd, Harlan, Knott, Perry and Pike counties. s

The Kentucky River Area Development District has tentatively approved a $100,000 low-interest loan from its revolving loan fund for the new Mountaineer Furniture Manufacturing in Isom. The company is still waiting for the last of its financing package to be approved, but the factory building itself is ready for occupancy. s

The Jenkins City Council and the Letcher County Library Board cleared the way Monday for construction to begin on a new library in Jenkins. The library will be built in the center of town, beside the David A. Zegeer Coal and Rail Museum. s

The Whitesburg Yellowjackets built an early lead against Fleming-Neon in the 53rd District tournament championship game at Jenkins and then made their free throws to unseat the defending district champion Pirates 87-79.

Jenkins city officials say they were given no notice that the town’s only medical clinic was closing and moving its only doctor to an office in Whitesburg Walmart. Jenkins City Councilmembers and citizens said they were baffled by the decision, with one member of the Jenkins Council saying the move took place in the “dead of the night.” s

The U.S. Environmental Protection Agency would have to review mining permit applications more quickly under legislation filed by two Appalachian lawmakers who say they want to boost coalfield employment. U.S. Reps. Hal Rogers of Kentucky and Shelley Moore Capito of West Virginia introduced a House version of the so-called Mining Jobs Protection Act that they say would protect Appalachian coal miners from “strangulation by regulation.” s

Letcher County resident Victor Gainer was honored by the Kentucky State Legislature for saving the life of Perry County District Judge Leigh Ann Stephens. Judge Stephens was eating lunch at a restaurant in Hazard when a man stabbed her, prompting Gainer to jump to her rescue, throwing the man through a window. s

Army National Guard Pvt. Cory A. Dickerson has graduated from the Infantryman One Station Unit Training at Fort Benning, Columbus, Ga. He is the son of Foister and Georgia Dickerson of Eolia.