The Way We Werre

A visit with biggest legend in Kentucky’s basketball history 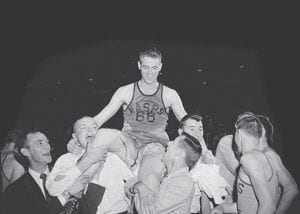 King Kelly Coleman was carried off the floor after scoring 68 points in the consolation game against Bell County in the 1956 Kentucky State Tournament, held at Memorial Coliseum in Lexington. (Photo courtesy Gary P. West)

A trip through the mountains of eastern Kentucky is a thing of beauty regardless of what time of year the journey is made. Even before the leaves have turned and fallen to the ground of the thick forest that covers the mountains, it is only enhanced by the ribbon-like roadways that have been carved out with surgical dynamite cuts.

I’ve never been quite sure how it’s done, but now that it is, some previously difficult areas to reach have become much more accessible. I’m glad they are. Not that anyone needs a reason to travel, on this particular trip to eastern Kentucky, I had one.

It had been close to four years since I had seen King Kelly Coleman, Kentucky’s first Mr. Basketball in 1956, who is considered by anyone who knows that a basketball is pumped and not stuffed, to be the biggest legend in Kentucky roundball history. Every March King Kelly’s name pops up during high school tournament time.

I first met Kelly in 2003, when I drove to Crossville, Tennessee, where he was living in a self-imposed exile at a golfing community. My intent was to write a magical article on this reclusive legend. 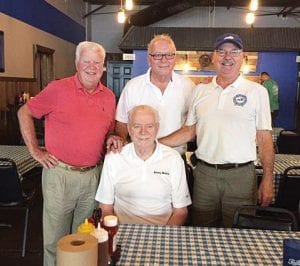 It had not been easy to find King Kelly. First I had driven to Wayland, a fallenon hard-times former coal camp in Floyd County about 15 miles from Prestonsburg. He had recently been there, I was told, but I just missed him. He still had a house in Wayland, but he was living somewhere in Tennessee they said. It was a place where he could fish and play golf.

I left my business card with the owner of the only gas station in Wayland who told me he was a friend of Kelly’s.

“Before you go, we’ve got several pictures of him back by the coffee machine,” he told me pointing to a back area of his store. “I’ll give your card to Jerry Fultz. He’s the head man at the Community Center next door.”

The rest is history.

Never really expecting anything to come out of a one-hour visit all those years ago, several months later out of the blue I receive an e-mail.

The name at the end simply read Kelly. No last name. He didn’t need one.

I called him and we set a date to meet at a fast food restaurant at an I-40 exit at Crossville, Tennessee.

I met Kelly in the parking lot and he suggested I follow him to his house where we could better talk. Four hours later I was headed back to my Bowling Green residence. The two-hour drive getting there seemed much longer going than returning.

I had much more than a magazine story I remember thinking. In fact, I don’t even recall the drive back. “This is a book,” I said aloud with no one else to hear me.

My trip to Wayland and then to Tennessee did indeed turn into a book, “King Kelly Coleman, Kentucky’s Greatest Basketball Legend.”

But now my trip to Wayland, 15 years after our first meeting, had nothing to do with the book. Oh sure, we had gotten together several times in Wayland as I researched basketball history in the mountains, and numerous times the two of us did book signings together.

I came to Wayland now because, now at the age of 80, King Kelly was experiencing some health issues. Not only did I have to or need to, I wanted to visit him.

Jerry Fultz, now the Mayor of Wayland, and still the director of the Community Center, had called to inform me of Kelly’s situation, so my journey from Bowling Green to Wayland took on an entirely different reason.

From Bowling Green I headed to Somerset where my wife and I picked up Hwy. 80 to London. This is where a sports nut can begin a tour of passing through and by small mountain towns that have been the home to some of the biggest names in history.

Upon entering Floyd County, still on Hwy. 80, a sign pointing to the left reads “Wayland” that leads quickly to Hwy. 7. It’s the longest three or four miles in history, over a winding, winding and more winding narrow road that reads “King Kelly Coleman Highway.” You’ll know you are in Wayland when you drive past the old wooden structure with a large sign affixed to the building that reads “Wayland Wasp.”

The gym is where King Kelly set all of his records in 1956, many that still stand. Locals play there today, and Fultz has raised money to preserve it and turn it into a Mountain Sports Museum.

My wife and I arrived the night before and stayed at beautiful Jenny Wiley State Park. The following morning we drove to Wayland where we were joined by Fred James, former Prestonsburg tourism director and local historian of epic stature.

Of course, Jerry Fultz was on hand to show us how much he has expanded his collection of Wayland sports memorabilia with the main portion being the King Kelly era. Basketballs, jerseys, uniforms, scorebooks, pictures and correspondence from players, coaches and fans make it a must for anyone who wants to step back in Wayland history.

The morning was spent simply talking and looking at a scrapbook I had kept about the book that included letters from throughout Kentucky and several states from fans who had seen Kelly play.

Over the years it seemed that everyone I talked to about Kelly said they were there in Memorial Coliseum in Lexington in March 1956 when he scored a state tournament record 68 points against Bell County.

“If everyone was there that said they were, the game would had to have been played in the football stadium,” laughed Kelly in talking about the 10,500- seat Memorial Coliseum.

Throughout Kelly’s life, he has lived in Michigan, Ohio, Tennessee, and Florida, while always maintaining a residence in Wayland. And today he has gravitated back home where he is at peace with himself, family and friends. He’s doing the necessary things to get his health in order, that includes trips to Lexington, not to play basketball, but instead to its medical facility.

Work is underway now on the Wayland Gym he made famous in the mid- 50s. Had Kentucky’s greatest basketball legend not played there it would probably have been torn down decades ago. But after all of these years, King Kelly is the biggest thing to ever happen in this former little coal camp.

Gary P. West can be reached at west1488@twc.com. He wrote this special report for the Glasgow Daily Times, where it originally appeared.