The Wells Family to appear at bluegrass festival 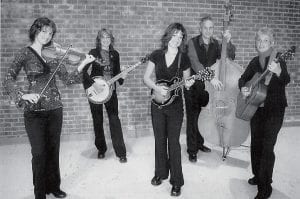 TO PERFORM – The Wells Family will perform at 5 and 9 p.m., July 13, at the Cumberland Mountain Bluegrass Music Festival at the Little Shepherd Amphitheatre in Jenkins.

In only our second year of producing music shows, the Little Shepherd Amphitheatre in Jenkins has built a reputation as being a prestigious venue for musicians to perform. Many people have commented, “This is what we need here in the mountains to promote our very talented musicians and our area.”

The rustic Little Shepherd Amphitheatre is built in an intimate setting upon the mountain in a cozy, wooded area isolated from the rest of the world. The goal of the Cumberland Mountain Arts and Crafts Council is to produce good, wholesome, family oriented entertainment while promoting our artisans and our area. Last year the Cumberland Mountain Bluegrass Music Festival played host to dozens of musicians and hundreds of music fans from throughout the region and beyond. This year the event is expanded and become more diverse to include more novice entertainers, more local bands and nationally known entertainers. On Friday, July 13, our headliners will be the sensational Wells Family from North Carolina.

Few groups date to step out of their creative box and explore the unmarked territory of nearly every musical style, thus allowing them to create a distinctive style of their own. The Wells Family of North Carolina appeals to audiences in every genre, uniting both younger and older generations with their versatility. Their music has been accepted in a variety of music categories including bluegrass, gospel, country, folk and pop.

The band consists of Gary (Dad), playing upright bass; Debi (Mom), playing guitar; and daughters: Sara, on the fivestring banjo; Jade, on the mandolin; and Eden, on the fiddle. This band has a powerful acoustic sound, along with great songwriting skills, inspiring acapellas, family tight harmonies, driving instrumentals and a great sense of humor. Not only are they very talented and gifted musicians, they are awesome performers.

The Wells Family has consistently charted No. 1 on many bluegrass radio charts, and several of their original songs were chosen for the distinguished IBMA Songwriters Showcase. They have also contributed material to a motion picture soundtrack. The band’s endorsements by Sam Ash, GHS Strings, Beard Guitars and Intellitouch Tuners are a representation of the level of respect they have earned in the music industry.

Many times they have found themselves playing for sold-out crowds across the United States and Canada. They have been known to perform at events that include such greats as Ricky Skaggs, Ralph Stanley, Del McCoury, Rhonda Vincent, Seldom Scene, IIIrd Time Out and many more. Their music can be heard as far away as Australia, Canada, Europe, and Japan.

The Wells Family was one of the bands chosen to perform at the highly esteemed Central Canadian Bluegrass Awards, and their DVD was recently a number one seller in Japan. So, not only are they sweeping the nation with their brilliant sound – they are stunning audiences worldwide.

The Wells Family will perform two shows at the Little Shepherd Amphitheatre in Jenkins on Friday, July 13, at 5 and 9 p.m. Along with the Wells Family will be Kentucky Red with Red Roberts and family from Jackhorn; Fast Lane with Brett Amburgey from Knott County; Bluegrass Circle from Virginia, and the Robinson Brothers from Pike County.

To get to the Little Shepherd Amphitheatre, take Route 3086 off U.S. Route 23 and 119 at Jenkins and go approximately 1/ 4 mile to Amphitheater Road. Look for our signs on the highways.

Food booths open at 3 p.m. and entertainment begins at 4 p.m. We strive to make our venue friendly and family oriented. No alcohol, no drugs, no coolers, and no pets. You may want to bring a folding chair; we have only 200 chairs.