The Whigs to perform Friday

Trio has peformed before 65,000 in London and sold-out Madison Square Garden; Chicago band will open show 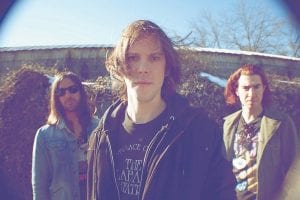 The Whigs were formed in 2007 in Athens, Ga. They will perform in concert at Summit City in Whitesburg on Friday, April 15. Admission is $15.

What would you do for an encore if during the last 13 months you had released your third critically acclaimed rock album, performed on “The Tonight Show with Jay Leno” and “Late Night with Jimmy Fallon,” played with bands such as The Black Keys and The Hold Steady, and supported rock superstars Kings of Leon on a tour of the U.S. and Europe that included a performance before 65,000 concert-goers at London’s Hyde Park?

If you’re The Whigs, a threepiece rock band from Athens, Georgia, you would announce your own spring headlining tour of the eastern U.S., invite the new Chicago band Company of Thieves to be your opening act, and sneak in an April 15 performance at Summit City in Whitesburg while on the road between your own show in Charlotte, North Carolina on April 14 and a supporting role for the Drive-By Truckers in Charlottesville, Virginia on April 16.

In other words, music lovers in Letcher County and elsewhere in southeastern Kentucky are being given a rare opportunity to see an up-and-coming rock band that has played before sell-out audiences in buildings as famous as New York City’s Madison Square Garden but remains grounded and hungry enough to take a chance on selling about 100 tickets in a place it probably never even heard of before Friday night’s show was booked. 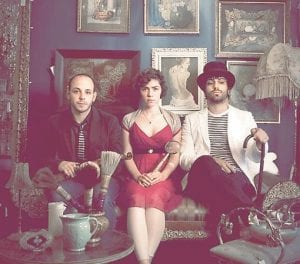 Since The Whigs were founded in Athens in 2007 by singer/guitarist Parker Gispert and drummer Julian Dorio, the trio has been known as one of America’s finest young rock bands. The Whigs’ already good reputation grew even better with the addition of bassist Tim Deaux just before the release of their 2008 sophomore album Mission Control and the non-stop touring that followed. When not headlining their own shows, The Whigs could be found opening for the aforementioned Kings of Leon and Drive-By Truckers.

In March 2010, The Whigs released their third album, In the Dark, which led New York Times critic Jon Pareles to praise the band for their “two-chord guitar and drums furor worthy of The Who.”

Other top publication has also been singing the praises of The Whigs.

“OK, remember this name: the Whigs, a sweet-and-noisy garage trio with a drummer who groks Keith Moon,” wrote a Boston Globe critic after seeing the band perform at the South By Southwest Festival in Austin, Texas. “They’re young, but they’re ready.”

A People magazine reviewer said: “On 2008’s Mission Control, The Whigs displayed shades of the late, great Replacements. On their third album (In The Dark), this Athens, Ga., trio continues to do Paul Westerberg and company proud with garage rock that’s heavy on hooks, riffs and swagger.”

“This Athens trio burnishes the South’s recent rep as a cauldron of literate rock acts,” added USA Today. “Though their pop-dusted garage band approach is distinctive, there are echoes of Kings of Leon bite, My Morning Jacket experiments and Drive-By Truckers lyrical honesty. Singer/guitarist Parker Gispert explores angst and sexual guilt without getting wimpy or losing thrust.”

“(The Whigs) evoke the neoroots rock vibe of My Morning Jacket, the cool minimalism of The Strokes and the perfectly constructed pop of the early Sixties,” says Rolling Stone.

Admission to Friday’s show is $15.

Opening act Company of Thieves is a rock band from Chicago whose first album, Ordinary Riches, was released in February 2009 and debuted at No. 5 on Billboard’s Heatseekers Chart.

The band’s single “Oscar Wilde,” which highlights the work of vocalist Genevieve Schatz, was featured on an episode of the TV series “Gossip Girl.” The second album by Company of Thieves, Running from a Gamble, is set for release on May 19.

The phone number for Summit City is 633-2715. For more information on the musicians performing at Friday’s show, visit www.thewhigs.com or www.companyofthieves.com.

Writer Thomas A. Ward was with The Whigs this past December for their stop in Munich, Germany with Kings of Leon. For an interesting look at the band and their tour experience, visit http:// www.thestoolpigeon.co.uk/features/ whigging-out.html