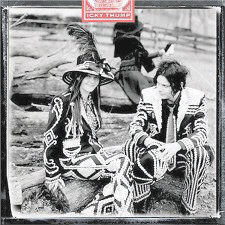 With their sixth studio album, the White Stripes delve into some uncharted musical waters while all the time keeping afloat with their signature sound. Jack White’s electro-synth, mail-order guitar sound is still there, as are Meg White’s off-kilter heart-beat rhythms. What’s new this time around is the addition of horns, less keyboards and the occasional bagpipe.

The album was recorded at Nashville’s Blackbird Studio over the span of three weeks, and the results are stunning.

The lead single “Icky Thump” with it’s whirlwind pyschedelic guitar, stream of conscience vocals, and Latino flavored rhythm is a crusher of an opening track. It’s a definite head-bobber, sans keyboards, and is followed by one of the highlights of the album, “You Don’t Know What Love Is (You Just Do As You’re Told),” which contains a classic ‘Stripish’ melody and a sing-along chorus.

A couple of garage-blues numbers also show up on the album. The first, “300 MPH Torrential Outpour Blues,” is a laid back and sluggish lament, while the other, “Catch Hell Blues,” is a Delta-tinged slide guitar workout with Jack wailing and gnashing under his breath. A definite pleaser.

Among the originals is an unusual cover of “Conquest (The Hunter Became The Prey),” made famous by Patti Page. It’s playfully reminiscent of something from a Quentin Tarantino film, replete with mariachi horns and over the top vocals.

Another interesting song is “Prickly Thorn, But Sweetly Worn,” a Scottish hoe-down, complete with bagpipes, a yodelling chorus and some traditional percussion. Also of interest is “St. Andrew,” which carries the same vibe along with Meg recounting a prayer to Scotland’s patron saint. One can imagine the two in the studio, minus their signature color scheme and sporting kilts and tartan plaids instead.

Meg also gets some face time on the groovy, Marc Bolan-inspired talk-fest entitled “Rag and Bone,” which features Meg and Jack conversing as “rag and bone” collectors in search of treasures in their neighbors’ homes. A little comical, but still a rocker of a song, with some great banter between the two – “I saw some stuff in the yard, do you think they’ll give it to us?” “Oh Meg, don’t be rude! They might need it!”

Other rockers on the album include “Bone Broke,” “Little Cream Soda” and “I’m Slowly Turning Into You.”

What would a White Stripes album be with a song about heartbreak? Well, that song is “A Martyr For My Love For You.” It’s an acoustically driven song with a rhythm reminiscent of the late 90’s crossover hit “Ends” by Everlast. It’s a beautiful song.

The album finishes with “Effect and Cause,” a song similar to “Well It’s True That We Love One Another” from the duo’s 2003 masterpiece “Elephant.” It’s a fun song to close with and brings an amazing album into full circle.

In my eyes, Jack White can do no wrong. Whether it’s with the White Stripes, the Raconteurs, or in some guest spot, he is a genius, and this album is yet another masterpiece from the Detroit-based virtuoso.

Charles Fontaine hosts a weekly blues radio show on WMMT-FM in Whitesburg on Friday nights at 10 p.m. He owns and operates Dad’s Cds in Wise, Va., and can be reached via email at scenic.overlook@verizon.net