The Who still rock 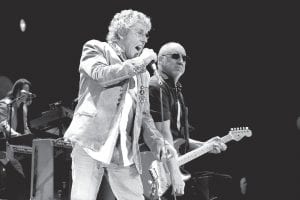 Singer Roger Daltrey and guitarist/songwriter Pete Townshend have proved they can still “bring it” in The Who’s current “Quadrophenia and More” tour. (AP)

It had been 30 years since The Who had performed in the Bluegrass State during their “farewell” tour in 1982, but on February 16 the British rock legends brought their “Quadrophenia and More” tour to Louisville’s Yum! Center.

Despite losing two of its founding four members (drummer Keith Moon in 1978 and bassist John Entwistle in 2002) the group still proved why they will go down in rock history as one of the greatest live acts ever.

First to take the stage were newcomers Vintage Trouble. As the four-piece rock and soul band from California entertained the crowd, it was easy to see why front man Ty Taylor has been compared on various occasions to a young James Brown. While singing tunes such as “Nancy Lee” and “Blues Hand Me Down,” Taylor glided across the stage with enthusiasm so high it became contagious throughout the beautiful downtown arena.

The band then took the time to slow things down as they performed “Nobody Told Me,” which brought a standing ovation from all who were previously in their seats. Vintage Trouble then finished their set and left the stage, leaving the crowd with nothing to do except anticipate the performance by the band they had all come to see.

When the stage was finally set, and the impatient fidgets of the crowd growing more frequent, it was finally time for the Rock and Roll Hall of Fame inductees to take their place onstage and in front of the audience. Accompanying founding members Roger Daltrey (lead vocalist) and Pete Townshend (songwriter and lead guitarist) were keyboardists John Corey, Loren Gold and Frank Simes; the multi-horn duo of J. Greg Miller and Reggie Grisham; bassist, Pino Palladino; the guitar playing younger brother of Townshend, Simon Townshend; and Zak Starky, the drumming son of Beatle Ringo Starr. Though the accompaniment of three keyboardists seems unreasonable, it was a necessary choice for this tour, the majority of which focuses on the difficult-toplay 1973 concept album “Quadrophenia.”

The tour is named “Quadrophenia and More” because of the performance of all 17 songs on the two-disc album plus a few of The Who’s greatest hits. Because “Quadrophenia” was the product of Townshend’s then-blooming interests in the synthesizer, it originally failed when it was brought to live audiences with no keyboards. Now 40 years later, the group has brought new life to the rock opera that tells the story of Jimmy, a troubled kid who has a double case of schizophrenia (hence the name “Quadrophenia”). This results in embodying characteristics of all four original members and makes for an incredible story.

The group started their set with “I am The Sea,” the first track on “Quadrophenia.” Even though the show had just begun, it was easy to see how the group had become so legendary with Townshend’s impacting lyrics and songwriting and Daltrey’s passionate interpretation. Following this song were tracks including “The Real Me,” “Cut My Hair” and “I’m One.” Right from the beginning of the show it was evident that this would be an explosive performance, and Townshend didn’t disappoint as he brought the arena to life with each of his signature guitar moves, including the famed “windmill.”

The band continued to tear through other “Quadrophenia” songs such as “Helpless Dancer,” “Is It in My Head,” “5:15” and “Drowned.” During these songs old footage of The Who onstage projected in the background intertwined with videos depicting various historical events that took place in the 1960s. All the while every audience member was nearly entranced in the story of “Quadrophenia.”

Though it is hard to choose a major highlight from the show of so many bright spots, one of the most touching moments came when the group played “Bell Boy.” This track from “Quadrophenia” features late drummer Keith Moon’s vocal. The song started out normally, with the band facing the audience, but the curiosity of the crowd grew as Moon’s parts grew closer. Then when it was finally time for his energetic dialogue to erupt from the speakers, the entire band turned from the crowd to watch the giant video screens showing vintage film of Moon performing the song. This salute was the second to appear for late band mates, the first being a bass solo from John Entwistle revealed the same way during “5:15.” The tributes were an amazing way for Townshend and Daltrey to to show that their friends had not been forgotten.

After “Bell Boy” The Who finished the “Quadrophenia” section of the show and began to play the “And More” part of the concert with six hits nearly every rock fan has heard before. These included “Who Are You,” “Baba O’Riley” and “Won’t Get Fooled Again,” three songs re-popularized after they became theme songs for the “CSI” television francise. Also In this song selection were “Pinball Wizard” and “Behind Blue Eyes.” The band’s final song was the acoustic “Tea and Theatre,” which was performed acoustically by only Daltrey and Townshend after the group took a bow and the other members left the stage.

“Tea and Theatre,” which appears on The Who’s 2006 album “Endless Wire,” was written as a reflection of the remaining duo’s life and career together. It helped bring the show to an eased end, and after it was finished the two took a final bow together. After this they smiled and Townshend jokingly raised his guitar above his head suggesting that he was about to smash his guitar in the same fashion he sometimes did in the band’s early years.

As the crowd encouraged him the smash the instrument, he gently placed it back down completely unharmed, with the crowd nodding in compromise. It was this small gesture that truly showed that despite the fact The Who has changed in members, decades, and sound, they will always have an arena full of people at their full attention.