The Woggles put ‘show’ back in ‘showmanship’ at performance here 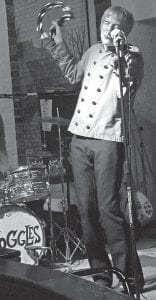 To say The Woggles rocked the house at Summit City last week would be an understatement.

The four-member rock and soul band whose singer, The Professor Mighty Manfred, recently led National Public Radio to say he sings as if he’s not sure he will “ever get another chance to record,” put the “show” back in show business for a small but enthusiastic Wednesday night crowd.

The band kicked off its 17-song set with “Take It To The People” from its latest album, The Big Beat, and proceeded to do just that for the rest of the night.

Whether performing other songs from 2013’s The Big Beat (“Do the Git Get Down,” “What Kind of Girl,” “Big Beat Strong,” “Stand,” “Lights, Camera, Action,” “Move,” “Baby, I’ll Trust You When You’re Dead”), 1994’s The Zontar Sessions (“I Got Your Number”), or 1997’s Get Tough (“Something to Believe In,” “Push”), the Professor, bass guitarist Buzz Hagstrom, and guitarist Flesh Hammer were blurs of motion while drummer Dan Elektro kept the time. 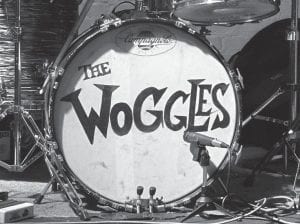 The Professor had his mike stand out singing in the crowd about as often as he stayed onstage. At one point he was joined by Hagstrom and Hammer, who duckwalked into the audience without missing a note. Not once did the band take a break.

Simply put, this group, which was formed in Athens, Georgia in 1987, put on a show the likes of which had never been seen in Whitesburg before, putting to shame earlier attempts at showmanship here by bands such as St. Paul and the Broken Bones.

The Woggles hope to be back to Whitesburg within the next year. Until then, you can catch The Professor Mighty Manfred’s radio show daily on “Little Steven’s Underground Garage,” airing daily on Sirius/XM.