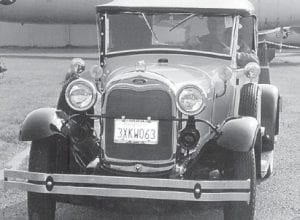 EVERETT VANOVER is pictured in his 1929 Model A rumble seat roadster during a parade and car show at Travis Air Force Base in California, where his car won first place.

After my three-year assignment in Germany, I was sent to the Pentagon and put in charge of the swing shift of the Air Force Communication Service Message Center and Printing Department, where every message from all over the world came into our department the last 18 months of the Vietnam War.

The classified messages were decoded and printed and sent all over Washington, D.C., to departments for which they were intended. The shift I worked on was during the bombing of North Vietnam and many thousands of messages came into our office after the bombing was over. It took many hours to finish the work.

Getting to work was a chore in itself. The highway to the Pentagon was sometimes closed because war protestors were sitting in the road and we had to wait until the police cleared the road for us to get through.

Our department was a very large room with no windows, and there was a guard at the door checking our ID cards as we came to work. Everything was classifi ed.

A female janitor with a bomb in her mop bucket put the bomb in the men’s bathroom on the third floor across the hall of my office, and when it went off it scared some of my men half to death and made an awful mess.

I had a photo badge that allowed me to go almost anywhere in the Pentagon.

I had been in the military for 27 years, and had very good jobs all over the world, but this job in the Pentagon was the worst place I ever worked. You never even knew the people who worked next door to you.

I put in and got my retirement, and went back to California where I had a job waiting for me and worked there until I was 81 years old.

My last day at the Pentagon, it took them most of the day to debrief me of all the top secrets I had seen over the years. I received three Air Force Commendations medals and a Certificate of Appreciation from our president.