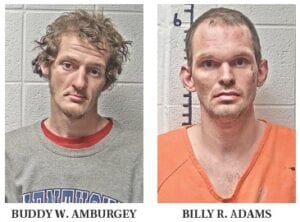 Kentucky State Police charged two men after a pursuit along KY 160 that ended when the fleeing vehicle’s engine quit.

According to Kentucky State Police, Trooper Jason Bates received a call that Billy R. Adams, 30, of Jeremiah, had attempted to break into a building on Isom Drive in Isom, then gotten into the passenger side of a pickup truck and left the scene.

Bates wrote in a citation that he passed the pickup truck and turned his cruiser around as the truck turned onto KY 160 at Van. Bates said he and Trooper Michael Burton turned on blue lights and the truck stopped on the shoulder of the road, but when Burton started to get out of his car and approach the truck, it accelerated away from them. Burton and Bates followed the vehicle with lights and siren, and chased it onto Johnson Fork, where Bates said the engine died.

Bates said he and Burton approached the vehicle and tried to open the doors, the men locked them and refused to get out. The driver then restarted the engine and fled again when the troopers ordered the men out of the truck, the citation said.

Troopers said they pursed the vehicle until the engine died again. That time, Bates said the two were arrested.

Citations say the driver, Buddy W. Amburgey, 30, of Johnson Fork, told Bates and Burton that Adams had stomped on the accelerator the first time the truck stopped. Bates wrote that Amburgey had slurred speech and admitted to using heroin earlier in the day, and that a roadside sobriety test showed his eyes could not smoothly follow motion. Bates said Amburgey refused a blood test.

Both men were lodged in the Letcher County Jail. Adams is charged with resisting arrest, complicity to first-degree fleeing and evading police, and failure to wear a seatbelt. Amburgey is charged with first-degree fleeing and evading police, first degree wanton endangerment of a police officer, operating a motor vehicle under the influence of alcohol, resisting arrest, and several traffic violations.