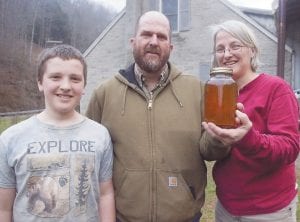 Reuben, Seth and Sheryl Long hold up a jar of their maple syrup. The family expects 20-25 gallons of syrup this year from 75 trees, and hopes to eventually have 500 maple trees tapped. (Photo by Sam Adams)

Real maple syrup calls up a mental image of the Green Mountains and hardy Vermont Yankees in plaid coats and hunting caps, trudging through the snow with a bucket to tap maple trees.

But some eastern Kentucky farmers think it might one day call up images from the Kentucky hills, and hearty Appalachian mountaineers.

The Letcher County Extension Office held a seminar on maple syrup last winter, and some landowners here have decided maple may be the miracle that puts mountain farmers on the map.

The key is in Kentucky’s famously changeable weather. As the joke goes, if you don’t like the weather here, wait 10 minutes. That freeze thaw cycle, when temperatures drop below 32 degrees at night and then rise to the 40s, 50s or 60s during the day, unlocks a bounty of maple tree sap. Vermont, made famous by Maple syrup, has a period of repeated freezes and thaws that lasts about six weeks. Kentucky has a season two to three times as long.

“We’ve got winter from December to early March,” said Seth Long, standing near a bubbling, steaming evaporator filled with the day’s harvest of maple sap. “Here our forests have been over timbered, mismanaged, and when you have that situation, maple trees are one of the first trees to come up.” 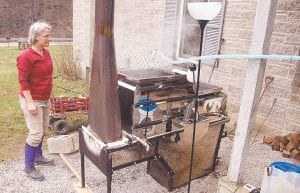 Sheryl Long, his wife, was feeding logs into the fire and opening the tap to pour more raw sap into the evaporator. She said warm weather is the enemy, but this winter has been perfect, with cold nights and warmer days.

“If it doesn’t freeze and thaw, you don’t get any sap,” she said.

And if the temperature gets too high, it can heat up the sap in the tubing or the collection tank and give it “an off taste.” They’ve had to flush their lines a couple of times this winter to remove bad sap.

The Longs live three miles up Craft’s Colly, just outside the Whitesburg city limits. Their 50 acres of hillside, riddled with old, un-reclaimed strip mines grown up in a tangle of 50-year-old brush and trees, might be considered nearly worthless to some. But Long said he has tapped 75 maple trees 90 times on that hillside, and he expects to have 500 trees tapped if everything works the way he thinks it will. That’s still a fraction of the 1,200 trees Savage Farms has tapped in Louisa.

The trees are connected by a web of pale blue plastic tubing on five-sixteenths of an inch in diameter. The tiny tubes carry sap from the trees into a large plastic tank, and then a three quarter inch line carries it down the hill and into the wood-fired evaporator just off the edge of the Long family’s patio. Seth Long said the evaporators come in sizes up to six feet wide and 18 feet long, but his is one of the smallest – about two feet by four feet.

That doesn’t sound like much until he does the math. Maple syrup sells for nearly $1 an ounce, or $128 a gallon.

The Letcher County Cooperative Extension Office has had been tapping maples above its building for five years, and bought an evaporator four years ago to show local farmers what could be done, said Shad Baker, extension agent for agriculture.

The office now has more than 500 taps in 260 trees, but Baker said the trees aren’t producing much this year because the taps weren’t deep enough. Baker said they should have had thousands of gallons of sap, but have had only about 150. That’s enough for maybe as much as three gallons of syrup.

“ The intention is to eventually have it for sale,” Baker said. “Last year, we had a pancake breakfast and used the syrup for that.”

Baker said he called a friend in Maine and figured out the problem this year, and thinks it’s a minor setback. He said he “absolutely” thinks maple syrup will be a viable industry here, especially with the push for tourism.

“For people that don’t want to log, or don’t have a lot of good timber, this would be a great way to make some supplemental income,” Baker said.

The Longs had made maple syrup for themselves before, but only two or three gallons a year. The demonstration at the extension office, and a ready market at the Whitesburg/ Letcher County Farmers Market convinced them to go commercial.

“We’ve been doing syrup for ourselves for about six years, but this year, the time was right to do this,” he said.

The Longs are one of several maple syrup operations supplying samples to a research project at the University of Virginia’s College at Wise called SAMARA, or Southern Appalachian Maple Research and Activities. Samara is also the name of the helicopter like fruit of maple trees.

While sugar maple is harder to find and tap here, red maple and other species are plentiful. Ryan Huish, assistant professor of biology at UVA-Wise, said the first year of research leads him to believe box elder, a species of maple, may be the best tree of all because it produces more sap, but with a lower sugar content, than sugar maple. He said the sugar content doesn’t matter much because it has to be evaporated anyway, and the extra fuel required to evaporate it can be justified by the much higher volume of syrup.

Working with another project called AcerNet, Huish and fellow academics are examining the anti-oxidant properties of maple syrup from Canada to the southern US, and those results also look promising.

“The farther south you go, the higher the antioxidant properties, which supports that the southern syrup is better for you than the northern syrup,” Huish said.

But, the farther south, the shorter the maple syrup season, so there is an ideal area somewhere in that range.