There’s no dream in this game 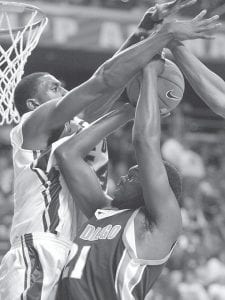 San Diego’s Gyno Pomare, right, looked for an opening against Kentucky’s Patrick Patterson during San Diego’s stunning 81-72 college basketball victory at Rupp Arena in Lexington on Saturday. Pomare had 13 points while Patterson had 20 points for his team. (AP Photo)

When neither program has won an NCAA championship in 10 years and only one of the two has even been to a Final Four in the same span of time, it can hardly be considered a dream game when the University of Kentucky and the University of Louisville get together this Saturday at 4 p.m. in Rupp Arena.

It hurts to admit this, but it’s the cold hard truth. College basketball’s top rivalry at present day rests on Tobacco Road in North Carolina and as soon as a few other match-ups put some years behind them, there will be more competition for this proud status in college hoops. Think Kansas-Texas, Indiana-Ohio State, and don’t forget what’s coming back out West with the recruits UCLA-USC are garnering lately.

What’s looking to be even more evident is that Kentucky’s last few years of constant decline on the college basketball scene is the real cancer on this rivalry. I know UK has won the last three years in this annual battle, but that’s been the crowning win and only true highlight of each of those three seasons. In that same time span Louisville has been much more fruitful and consistent in the all-important recruiting scene and that’s why the two programs are going in opposite directions at the present time. 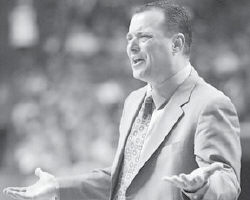 This has become a rivalry only for the Commonwealth. It’s not of much interest for the national college scene when neither team is presently in the top 25 nor has been in three of the last four years’ final regular season polls.

Rick Pitino does have Louisville in the midst of a quality season at 10-3 and has assembled some solid young recruits to keep the Cards in the hunt for a quality run in the Big East and down the stretch into March Madness. There has been one minor spat between Coach P and his sophomore sensation Derrick Caracter that cost him a one-game suspension, but player and coach kissed and made up (or at least we know the coach did) in time to not cost the team much turmoil. Injuries to key players David Padgett and Juan Palacious have been overcome because Louisville’s coaching staff took care of business the past two recruiting seasons and stockpiled enough talent to weather the unforeseen storms.

Billy Clyde Gillispie, on the other hand, enters his first Battle of the Bluegrass with a Kentucky team struggling dangerously close toward the program’s first losing season since the late ’80s at 6-6 with only five quality Division 1 players to right this sinking ship before the end of this season.

Two of those five (sophomores Jodie Meeks and Derrick Jasper) have been virtually nonexistent in 10 of the first 12 games while on the injury list rehabilitating, and two of the remaining three (seniors Ramel Bradley and Joe Crawford) have been in Gillispie’s doghouse for a period of time during the first or second half in all of the first 12 games. UK’s 6’9″ freshman phenom Patrick Patterson, Gillispie’s lone recruit on the roster (since Alex Legion’s abrupt departure), has been the only consistent player to date, which means the bulk of the team’s playing time at two of the starting positions and most all substitutions so far this season have been divided up among former coach Tubby Smith’s recruiting mistakes (Ramon Harris, Perry Stevenson, Michael Porter, A.J. Stewart, Jared Carter, Morakenyo (Mike) Williams and 10-time walk-on starter Mark Coury). These players, I’m sure, are fine young men off the court, but the simple truth is they are classic backup players at best by UK standards who have been thrust into starting or key reserve roles on this particular team. Remember Sherray Thomas, Lukas Orbzut, Bobby Perry and company in their last two years of trials and tribulations, well let’s just say we’ve still got a few more games to deal with Tubby’s curse.

Gillispie’s only costly mistake to date in this columnist’s eyes has been in spending too much time trying to break his only two seniors of a few old habits, especially so-called practice habits. That has put a strain on these two players’ contributions to date. It’s probably too late now and hindsight is always better, but it may have served this particular team and year best if Bradley and Crawford were granted some freedom and margin of error, especially on offense different than the freshmen and sophomores who will be with the program for another three to four years with plenty of time to nurture along.

Regardless of how the two seniors talents are implemented into the remainder of their swan song as Wildcats, Gillispie should not have been expected to do much with the chronic injuries that have accumulated with two of his top five players.

Nobody has ever entered a donkey in the Kentucky Derby. We all know how it would end.

So don’t blame Gillispie and his few mistakes to date for the present state of UK basketball. There were many more crucial mistakes made by the previous coaching staff that has caused the dilemma that rests with Big Blue Nation’s proud and historic kingdom of Kentucky basketball.

Don’t expect much from the Blue and White this Saturday and hope that the aura of the atmosphere in Rupp Arena itself will raise the level of play of the Wildcats to make it a competitive game. But for UK to win it will have to play way above its head and Louisville will have to lay a clinker because taking player one through 10 on the two rosters and factoring in the raw physical talent of each, the Cards win in a laugher.