There’s no use in complaining as it is winter 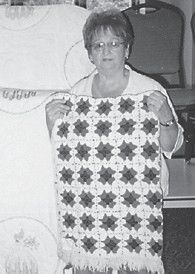 SYBIL WHITAKER of Whitesburg made this afghan which was chosen grand champion of the Letcher County Extension Service exhibit during Mountain Heritage week. Her work has won 10 ribbons and includes quilts as well as afghans.

Once again the mountains of eastern Kentucky I love so much were blanketed with snow! By the news I have seen there was almost a foot of snow that fell in just a short time! I hope it doesn’t do damage like the last time a snow hit just about a month ago knocking out electricity and phone service.

Harrison and surrounding areas have dodged the bullet so far this year as far as snow is concerned. We still have a couple of months to go before spring gets here so we could very well get it!

It sure is bitter cold in these parts at the present time! There’s no use complaining as it is winter. I told Bob Akemon I would be glad when it hit 90s again! Of course he said too hot. I can take clothes off to keep cool, it seems I can never get enough on to be warm

Vickie and I went to the Coon Hunters Club. The music was very good. You never know who will show up to play. Marvin Davis has been there two diff erent times to help out the groups. 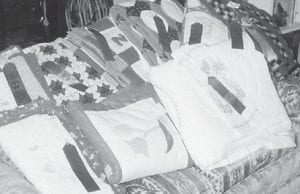 Marvin Davis is a wellknown songwriter; he wrote the song ‘Bootleg John’ and others. I have known of Marvin for several years and met him and his wife Rosie Davis in person a few years ago.

I was in seventh heaven listening to these fine musicians. I hadn’t been where they were playing for a few years until they performed at Flatland Bluegrass Barn at Bath, Ind. Ever since then every time I get a chance I go to listen to the group. When Marvin Davis walks into a music place you know you are in for some good music, no matter who he picks with.

I would walk a country mile to hear him saw the fiddle! Marvin is multi-talented; he can play several instruments. I am glad I am too old to be something called a groupie or I might have Vickie tagging along every place he plays.

Larry Roark, aren’t you glad I live many miles away since you are a good singer and musician?

I went to Downtown Miami in Hamilton, to listen to music. Vickie Power met me there as she was spending the night at her daughter Tina Ledford’s. Vickie and I were talking about how diff erent it was driving separately.

A group called Berachah Valley was there. I have heard this group before, but I was curious about the banjo picker as I had heard the name of Merle Boggs for several years.

Once again curiosity got the best of me! Merle Boggs has a family connection from Letcher County as his mother was a Halcomb. Merle is the grandson of Mindego Hall from Linefork.

Merle was raised around Barbourville, there wasn’t time to ask all the questions I wanted to. I did find out that Merle served in Navy with someone I knew years ago. It is a small world no matter how big we think it is! Merle and his wife live in Piqua.

Merle is a smooth banjo picker and a good songwriter. Once again, it gives me a good feeling in my heart to see and hear someone with ties from the mountains of eastern Kentucky!

Facebook website on the Internet still amazes me. So many people from Letcher County are on it. I receive the nicest comments from everyone.

Ruth Ann Brown invited me to stop by Campbell’s Branch Community Center to enjoy the good music on Thursday evenings. If I ever get back there I intend to do this.

Belated happy birthday wishes to Junior Karaucka, whom I had always heard referred to as ‘Crockett.’ His birthday was on Feb. 5. Junior shares a birthday with my sister-in-law, Wanda Hall.

Belated happy birthday wishes to Daisy Manning’s granddaughter who was 19 years Jan. 30. Daisy is from the Linefork area, although she lives in Missouri. She enjoys taking care of her nine-month-old greatgrandchild. Daisy is like so many of us misplaced hillbillies, her heart is still in the mountains no matter where she lives or how long she is gone!

Vickie Power and I took a drive to Metamora, Ind. We only found one store opened and it featured cookie jars and salt and pepper sets. Needless to say we didn’t buy anything. I have never seen so many cookie jars in my life. Had I purchased one, which I didn’t need, I could not have afforded a single cookie to put in it, not even an Oreo for my little sidekick Bennie Wiederhold.

The Harrison area is expecting several inches of snow, so I don’t guess I will be going anywhere. That is okay with me as I have a book I need to finish reading, and one called ‘Shady Grove’ that I want to read that was recommended by Willamae Boggs.

Willamae is still not perking too good. I am rather worried about her. She had to have a couple of lymph nodes removed. Please keep her in your prayers that nothing is seriously wrong.

I have never met her husband Carl Boggs and I feel as if I have known him for years. When I get back to the mountains Carl and Willamae promised to take me to Hindman to listen to music.

For years I have longed to go to a square dance at Carcassonne, which I may never get to do.

Gwen Huff Farmer is finally home after her knee replacement and is doing great. Gwen has seen some rough times, which she was expecting. Gwen’s children have been really good to help her through this ordeal.

Gwen is facing another kind of heartache that is so hard to face, her brother Rodney Ison has cancer and isn’t doing very well at all. Please keep this family in your prayers.

Gwen has lost several brothers in the last few years, the first one being my sweet friend Clarence Huff . I can still see this man when I told him I was homeless and asked if he could make his daughter move so I could stay with him. In fact I met Rodney that day.

The Huff family was instrumental in making Kingdom Come High School available for so many young boys and girls to achieve an education. Clarence Halcomb and other young boys also helped from what I understand.

when I attended Kingdom Come the few months EYE Care of my freshman year. Lily Coots drove the bus and he was a no-nonsense driver, you better stay in your seat.

My brother Richie Hall and Wanda are planning a trip to visit their daughter Crystal Caudill and boys. I hope they don’t get snowbound on the way.

Hello to their granddaughter Kirsti Deaton and J.T.

Hello to my brother Jerry and Mattie Hall and all their friends and neighbors who read my column.

Hello Grant Caudill. I hope you are feeling better. Someone told me you aren’t up to par.

Jessie Frazier, you and Carl Boggs be careful that you don’t slip and fall while you are out gadding about!

I haven’t talked to Johnny or Ann. I hope everyone is alright in their family.

Emma and Red Engle, I sure hope you are both doing better .I wish you didn’t live so far away, I would bring you a pot of beans and cornbread. Well, maybe not that, but I would bring you something. More likely a hamburger from McDonald’s as I do very little cooking. I did fix chicken and mashed potatoes.

My son Keith Ballard is doing so much better it is hard to believe he was so sick such a short time ago.

I still have a few copies of my book “The Beauty of A Rose,” if anyone is interested.

As usual I have waited until the last minute to finish this column, so I better get it on its way.