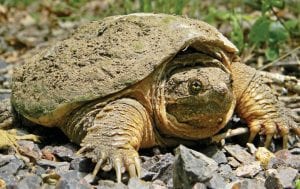 The Common Snapping Turtle may be taken year-round, non-commercially, with no bag limit in Kentucky.

On a warm day, it’s not unusual to see a row of semi-aquatic turtles basking in the sun on a log floating in a pond, small lake, stream, or wetland.

A few species are found statewide, but the highest populations are in western Kentucky.

Anglers are probably most familiar with the largest of these turtles.

The Common Snapping Turtle (Chelydra serpentina), found in waterways throughout the state, is usually an incidental catch. But some anglers target the big turtles, using trotlines, bank lines, and “hangrabbing,” often referred to tickling or noddling. An adult Common Snapping Turtle can weight more than 35 pounds.

Snapping turtle meat is delicious if the turtle is cleaned properly, the meat is tenderized by slow cooking, and prepared with a good stew recipe that includes seasonings and vegetables.

The Common Snapping Turtle and soft shell turtles may be taken yearround with no bag limit in Kentucky, but may not be harvested for commercial purposes.

A hunting license is required if turtles are taken by gun or bow and arrow.

The Alligator Snapping Turtle (Macrochelys temminckii), a native species that is now uncommon to rare in the state, may not be taken by any means. This prehistoric-looking species, that can grow to more than 100 pounds, is native to most of the southeastern U.S., but has only been found west of Caldwell County in Kentucky.

“There are only 11 records (confirmed occurrences) of Alligator Snapping Turtles here in the state,” said herpetologist John MacGregor, of the Kentucky Department of Fish and Wildlife Resources (KDFWR).

The last one occurred several years ago when one was caught on a trotline.

“Arkansas and Louisiana have the best habitat,” said MacGregor. “Bayous with slow-moving water.”

Here’s some details on four other native species of semi-aquatic turtles found in Kentucky:

The Red-eared Slider gets its name from the small orange/reddish stripe on the side of its head, and its ability to slide off rocks and logs and into the water quickly.

• The Eastern Mud Turtle (Kinosternon subrubrum) is only common in the swamps and sloughs of Kentucky’s Jackson Purchase Region, but has been found as far east as Elizabethtown, in sinkhole wetlands.

The carapace, or upper shell of this turtle lacks any pattern, and varies in color from yellowish to black. Its chin and throat are a yellowish grey, streaked and mottled with brown, while the limbs and tail are grayish.

• The Painted Turtle is widespread across North America, with four regionally based subspecies (Eastern, Midland, Southern, and Western) that evolved during the last Ice Age, some 12,000 years ago.

The subspecies Southern Painted Turtle (Chrysemys picta dorsalis), is the smallest, and restricted to Fulton County, in Kentucky, along the Mississippi River.

It has a prominent red stripe down the center of its back, and its plastron, or bottom shell, is tan.

• There are two species of Soft Shell Turtles in Kentucky.

The Spiny Softshell Turtle (Apalone spinifera) is found statewide and has spiny, cone-like projections on the front of its upper shell.

The Smooth Softshell Turtle (Apalone mutica) is found in the Ohio and Mississippi Rivers in Kentucky. This turtle’s upper shell is smooth, almost skin like, with no spines.

The most distinguishing features of these turtles are their leathery, moderately flexible carapace, and a distinctive long neck and pointed nose. Their webbed feet have three claws.

Softshell turtles are bimodal breathers, meaning that they have the ability to perform oxygen and carbon dioxide exchange by breathing air or while breathing dissolved oxygen from the water.

Both species are benthic feeders. They actively hunt prey or bury themselves in the sand, becoming almost invisible, and wait to ambush prey.

The Smooth Softshell Turtle prefers medium to large unpolluted rivers with moderate to fast currents, but both species require waterways with sand or mud bottoms, without rocky areas or dense vegetation, and sand banks.

They can’t regulate their body temperatures like warm-blooded mammals. Their body temperature, and hence their activity level and metabolism, are controlled by their environment. When it’s warm they are most active, as it gets cold, their bodily functions begin to slow down.

That’s why semi-aquatic turtles spend hours basking in the sun or shoreline logs or rocks.

Brumation is a term biologists use to describe the state that cold-blooded animals go into during cold weather — a sort of suspended animation. This strategy ensures their survival, and may actually lengthen their lives.

As cold weather approaches, semi-aquatic turtles find some quiet water and create a burrow in the mud, sometimes with leaves or other plant debris on the bottom, for insulation.

They become lethargic. They don’t eat or digest food. Their heart rate can slow to less than one beat per minute, and most amazingly, they “breathe” dissolved oxygen in the water through specialized skin cells.

Although turtle eggs or hatchlings are frequently eaten by raccoons, rodents, foxes and coyotes, snakes, and birds, the hard shells of adult turtles protect them from most predators.

After awakening from their long winter nap (brumation), turtles mate and females dig nests on sandy banks and lay eggs through mid-summer. It can take years for turtles to reach sexual maturity.

Currently the Smooth Softshell Turtle, the Alligator Snapping Turtle, Eastern Mud Turtle, and the Southern Painted Turtle are among the native reptiles being studied, tracked, monitored, or given special management consideration as a species of greatest conservation need, under Kentucky’s Wildlife Action Plan.

“Most of our turtle species are doing well,” said MacGregor. “We keep track of records (of occurrences) of the monitored species, and go out and look for them.”

Art Lander Jr. is outdoors editor for KyForward. He is a native Kentuckian, a graduate of Western Kentucky University and a life-long hunter, angler, gardener and nature enthusiast. This report was distributed by The Associated Press.