‘They are in such dire straits’

More are depending on food pantry for help 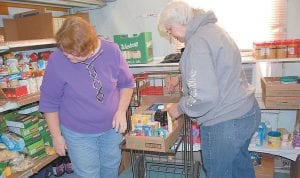 As the coal industry continues its slide in eastern Kentucky, the Letcher County Food Pantry has seen a continuing increase in the number of families it serves each month.

In October, 200 more people received food from the pantry, which is located in Whitesburg, than in January.

“There’s so many people that are below the poverty level and they really rely upon that food,” said Geraldine McDonald, president of the Letcher County Food Pantry. “Without that they would really be hurting.”

In October, 546 boxes of food were handed out at the food pantry compared to 300 in January. So far in November, 530 families have been served. When McDonald began volunteering eight years ago, the pantry served 250 to 325 people each month.

“Ninety-nine percent of the people are appreciative,” said McDonald. “You can tell by the way they act when they come in.” 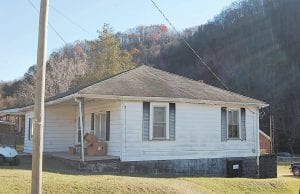 The Letcher County Food Pantry is located in Whitesburg in a house on Madison Street that is owned by the First Baptist Church. The church pays its utilities.

“They are in such dire straits,” said McDonald.

Those interested in getting food from the pantry are required to apply at Leslie-Knott-Letcher-Perry (LKLP) Community Action Council offices at 2 Main Street in Whitesburg. An interview is conducted to determine whether the person meets eligibility guidelines. Since the food pantry receives some commodities through God’s Pantry Food Bank, federal guidelines are followed. McDonald said those who are unemployed, receive Social Security or are disabled usually meet requirements.

The Letcher County Food Pantry has a base of 1,500 people, but not everyone gets food each month. The food pantry uses a card system to keep track of when and who picks up food. Recipients show proof of identification and sign for the food.

The food pantry is open from noon until 3 p. m. Monday through Friday. The food pantry, located at 204 Madison Ave., is operated out of a house owned by Whitesburg First Baptist Church, which also pays the water and electric bill.

“Once a month if they need it, they can come and get a box of food,” said Mc- Donald. “Some only come if they actually need it.”

On average, 30 people are served at the pantry each day. Back in the spring, McDonald said a record was set when 68 people picked up food boxes in one day.

“It was just unreal,” she said.

McDonald said the food handed out at the pantry is meant to supplement what people have in their cabinets or the food they plan to buy.

Several years ago, the McDonalds bought a box truck with lift gate to transport food.

Once a month, the Mc- Donalds travel to Hagerhill to pick up food donations. Food City and Walmart also give regular donations.

The food pantry has an annual budget of about $25,000, which is made up entirely from donations.

“Sometimes we’ll go over that and sometimes not,” said McDonald. “We’ve never run out of food.”

“People are generous,” said McDonald. “It’s purely through the Lord.”

McDonald said monetary donations are preferred because the food pantry can get more food by purchasing items at 19 cents a pound through God’s Pantry Food Bank.

“The volunteers need to be serious about volunteering,” said McDonald.

The food pantry started in the late 1970s after a coal company was fined for the Scotia mine disaster. Part of the settlement went to a community service project.

Geraldine McDonald began volunteering with the food pantry about eight years ago when she worked as a registered nurse at Whitesburg Appalachian Regional Hospital. After retiring, she has served as president for the past six years.

The McDonalds and the Combses are moving soon to Supply, North Carolina, which is about five miles from Holden Beach. December 15 is the closing date on their house.

Today (Wednesday) is the last day they will be volunteering at the food pantry.

Beginning December 1, the food pantry will be open from noon until 3 p.m. on Wednesdays, Thursdays and Fridays.