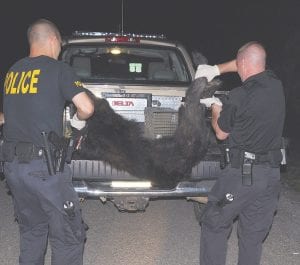 Black bear sightings are continuing to become more frequent in Letcher County as these two photos will attest. In the photo above, Jenkins City Police officers Sgt. Adam Swindell, left, and Tim Miller, right, loaded the body of a young female cub into the back of a pickup for transport to state biologists at the Kentucky Department of Fish and Wildlife in Jenkins. The officers said the cub was killed after being hit by at least one car on U.S. 23 near Jenkins on the night of Aug. 7. Police speculate that the vehicle which hit the bear suffered extensive damage. Below, a black bear was photographed by Tammy Sparks while searching through garbage cans in the community of Bottom Fork, near Mayking. (Top photo by Chris Anderson) 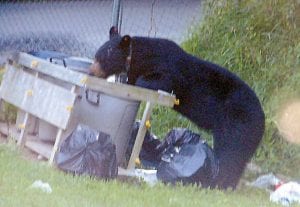