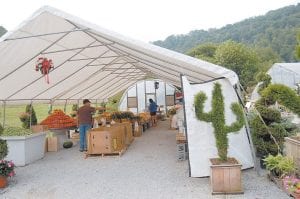 A shrub similar to the one pictured above at right was stolen at 1:31 a.m. on August 5 at the Golden Apple fruit and vegetable market at Ermine. The six-foot tall shrub is pr uned to look l ike a cactus and is pric ed at $400.

A six-foot tall shrub pruned to look like a giant cactus was recently stolen from an Ermine store.

Sharon Absher, an employee at the Golden Apple fruit and vegetable market, said surveillance footage shows the shrub was taken from store grounds at 1:31 a.m. on Aug. 5.

She said the Golden Apple started carrying large shrubs in the shapes of bears, stars and cacti in March. The stolen cactus shrub was priced at $400.

“It’s an unusual piece,” said Absher. “We’re the only ones around that carry the sculptured pieces.”

Absher said the Golden Apple will offer a cash reward to anyone who offers information leading to the arrest of the persons involved in the theft of the shrub.

Anyone with information about the theft can call the Kentucky State Police at 606-435-6069.