Thinking of giving a video game? Here are some ‘Santa’ suggestions 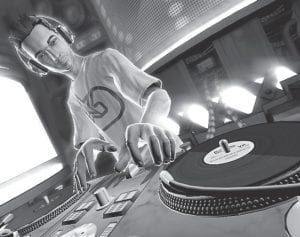 An animated version of the late DJ-AM is shown in the video game “DJ Hero.” (AP Photo/Activision)

The video game aisle can be intimidating for aspiring Santas who haven’t touched a joystick since “Pong.” But it has something for everyone: riveting solo adventures, online multiplayer battles and fun-for-the-whole-family social games. Here are some of the best picks for this holiday season.

Rakish adventurer Nathan Drake hunts for Shangri-La in this sequel, which mixes gunplay, fisticuffs and acrobatics with a witty, unpredictable story. One of the most beautiful video games ever published, it’s an interactive version of a Hollywood blockbuster — one of the good ones, like “Raiders of the Lost Ark.”

Rock-loving gamers have been grooving on “Guitar Hero” and “Rock Band” for a few years, but fans of hip-hop and dance music have been left out. “DJ Hero” corrects that, putting you behind the wheel of a fake turntable and letting you scratch and mix dozens of combinations of club tracks. It’s like hosting a rave in your living room.

For those who prefer classic rock, “The Beatles: Rock Band” lets you relive the career of the Fab Four, from a Liverpool club to their London rooftop farewell. It’s a loving tribute.

The latest Mario Bros. installment returns to the 2-D, sidescrolling action that made the spunky Italian plumber famous. This time, though, up to four people can play cooperatively, so more experienced gamers can guide newbies across the familiar fire pits and floating platforms. Now you can finally show your grandma — or your kids — what the original magic was about.

Anyone who loves puzzles such as crosswords and sudoku will adore the latest chapter in the Professor Layton series, which weaves about 150 brainteasers into a clever mystery. Forget about those so-called “brain training” games; the exercises in logic, math, observation and object manipulation here really work out the gray matter.

Then there are the hardest of hardcore players who want the toughest challenges you can throw at them. “Dragon Age” is a classic tale of sword-and-sorcery that will test the skill and strategy of even the most jaded “Dungeons & Dragons” nut. “Demon’s Souls,” another quasi-medieval epic, is so tough it will have mere mortals tearing their hair out. For the dedicated gamer, there’s nothing more satisfying.

This season’s monster hit continues the global battle against terrorists, and it’s bigger, louder and more brazen than its predecessor. A simulated airport terrorist attack has already drawn protest, and there’s plenty more in “Modern Warfare 2” that’s not for the squeamish. Older players with stronger stomachs will love it.