This pie is good — and healthy

By JIM ROMANOFF The Associated Press 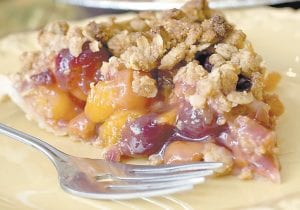 A slice of pie on Thanksgiving is as traditional as a serving of turkey. You can make this tradition healthier by making good choices when choosing the crust. This cherry-apricot crumb pie is topped with a low-fat oat crumble made with whole-wheat flour that helps reduce any dietary regret. (AP Photo/Larry Crowe)

At most Thanksgiving dinners, a selection of pies is almost as traditional as the turkey. But that slice of pie doesn’t have to tip the scales of dietary regret. It just takes a little moderation and common sense.

Most obviously, take a small slice; most pies should serve at least eight people.

If there is a choice of fruit pie or a creamy pie such as pumpkin (a painful decision for some), choose the former because it’s likely to have less fat and fewer calories.

The crust is the biggest nutritional culprit in most pies, with up to 220 calories and 15 grams of fat. A pie with only a bottom crust cuts these numbers in half (which seems like a vote in favor of that pumpkin pie, but don’t forget it still has eggs and cream).

This cherry-apricot crumb pie is the best of both worlds. A thick and colorful fruit filling is topped with a low-fat oat crumble made with whole-wheat flour, rather than an upper crust of traditional pastry.

Of course, any slice of pie can be sent over the top with a scoop of full-fat ice cream. Opt instead for low-fat ice cream or frozen yogurt, or even better, a dollop of nonfat Greek-style vanilla yogurt.

Even a dollop of whipped cream isn’t a bad choice. After all, a good deal of its volume is air, and 2 tablespoons of canned, whipped light cream has only 15 calories and 1-1/2 grams of fat.

In a medium bowl, combine the oats, flour, brown sugar, honey and oil. Using a fork, work the mixture together thoroughly; set aside.

Heat the oven to 375 F. Set a strainer over a bowl. Pour the cherries into the strainer, reserving the syrup. Cut the drained cherries in half. In another medium bowl, combine the cherries with the apricots, then set aside.

In a small saucepan, stir together the sugar and cornstarch. Slowly stir in the orange juice and 3/4 cup of the reserved cherry syrup (discard the rest, or reserve for another use). Stir the mixture over low until simmering and thickened, about 5 minutes.

Stir the thickened mixture into the bowl of apricots and cherries. Pour the filling into the pie shell. Sprinkle with reserved crumb mixture over the top. Bake the pie for 45 to 50 minutes, or until the fruit is bubbling and the topping is lightly browned.