This pork tenderloin is good for the heart 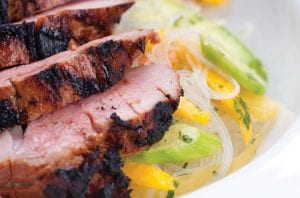 A few years ago, I was honored to be selected to be part of the Go Red for Women photo- and print-ad campaign for the American Heart Association. This year, I’m presenting a heart-healthy cooking demo for the newest Go Red For Women members.

Unfortunately, one out of every three deaths among women in the U.S. is attributed to cardiovascular diseases, including heart disease and stroke, causing more fatalities than all forms of cancer combined, according to the American Heart Association.

Furthermore, nine in 10 women have at least one risk factor for developing heart disease, but only about half are even aware of it.

“What you’ve heard is true: Heart disease and stroke kill more women than men, despite the publicly held misconception that it’s a ‘man’s disease,’” said Dr. Jennifer H. Mieres, a representative for the American Heart Association’s Go Red for Women movement and professor of cardiology at Hofstra North Shore-LIJ School of Medicine. “The good news is that even though an estimated 43 million women are affected, heart disease and stroke can be prevented with small incremental changes.”

An estimated 43 million women in the U.S. are affected by heart disease and stroke, resulting in over 400,000 deaths each year, according to the American Heart Association. By knowing the risk factors and taking simple steps like not smoking, getting regular physical activity, eating a heart-healthy diet and monitoring blood pressure, women can lower their chances of heart disease.

“ Heart disease and stroke claim the life of nearly one woman in the United States every minute,” said Lisa Sherman, president and CEO of the Ad Council. “But many women continue to believe the disease is one that just targets men or the elderly, so they’re not taking action to reduce their risk.”

Reduce your risk factors by embracing a healthier lifestyle and eating habits. Believe it or not, eating heart healthy can be equally as delicious as it is good for your body. And if you could save your heart by improving your diet, wouldn’t you at least want to give it a try? For more information, go to GoRed- ForWomen.org, where you can sign up to be a member, learn about heart disease and your risk for developing it, and find tools for living healthier, longer lives.

There’s a common misconception that anything described as healthy is lacking in flavor and satisfaction. To add insult to injury, there’s also an assumption that healthy foods are unaffordable. The truth is, there are plenty of creative ways to make a tasty, hearthealthy dish.

This heart-healthy recipe uses a lean pork tenderloin and Asian sauces to create a flavorful and easyto prepare dinner dish. Use any leftover pork and salad inside of a whole-wheat tortilla to create a wrap for lunch.

4. Bake at 450 F for 20 to 25 minutes or until done. Remove from oven, and let stand 5 minutes before slicing. The pork should be slightly pink in the center.

Toss slaw with the almonds and serve with the sliced pork tenderloin. Makes 2 to 3 servings.