This soup may cure your ills 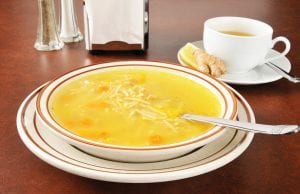 Chicken soup is an old remedy for fighting respiratory illnesses such as colds and flu; however, some recent scientific tests show that it actually may have medicinal value. Chicken soup has been found to be more effective than other hot liquids to increase the movement of nasal mucus. It also improves the function of cilia, tiny hairlike projections in the nose that prevent contagions from entering the body.

This recipe for Chicken Noodle Soup with Lemon and Ginger will help you through this frigid flu and cold season! Be well!

4 ounces fresh Chinese egg noodles (look in the produce
section of your supermarket) or 4 ounces dried vermicelli
noodles
1 medium carrot, cut into small coins
1 to 2 tablespoons fish sauce
1 boneless, skinless chicken breast half, cut into
1/4-inch-thick slices (this is easier if the chicken is partially frozen)

1. Finely grate 1 teaspoon of zest from the lemon and
put in a small bowl. Add the cilantro, parsley or basil leaves
and the ginger, and mix together. Cut the zested lemon in
half and squeeze it into a small bowl to get 3 tablespoons
of juice. Thinly slice two of the chile halves crosswise.
2. In a large saucepan, bring the broth to a boil over
medium-high heat. Add the lemon juice, noodles, carrots,
fish sauce and the 2 remaining chile halves to the boiling
stock. Reduce heat, cover and simmer the soup until the
noodles are almost cooked, about 3 minutes.
3. Remove the chile halves. Stir in the chicken and chile
slices and return to a boil. Remove the pan from the heat,

making sure the chicken slices are just cooked through. Taste
and add a touch more fish sauce, if you like. Divide the soup
evenly among four serving bowls. Divide the cilantro mixture
among the bowls, stir and serve. Makes 4 servings.

.
Angela Shelf Medearis is an award-winning children’s
author, culinary historian and the author of seven cookbooks.
Her new cookbook is “The Kitchen Diva’s Diabetic Cookbook.”