This week in Daytona 500 history 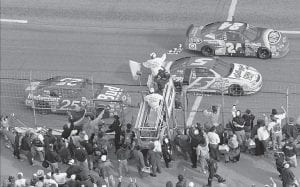 The sports world was abuzz this week in 1997 when Jeff Gordon, from Pittsboro, Indiana, became the youngest driver ever to win the Daytona 500 NASCAR race. In the photo above, Gordon, driving the DuPont Refinishes Chevrolet (24) followed by Terry Labonte, from Corpus Christi, Texas, driving the Kellogg’s Chevrolet, and Ricky Craven, from Newburgh, Maine, took the checkered flag to finish 1-2-3 during the Daytona 500 held February 16 at Daytona International Speedway in Daytona Beach, Fla. (AP Photo/Phil Coale) 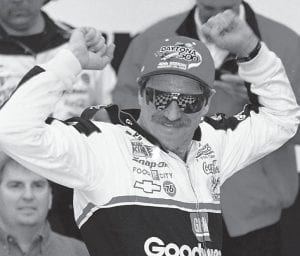 Dale Earnhardt Sr. had Victory Lane reflected in his sunglasses as he celebrated winning the Daytona 500 Sunday afternoon, Feb. 15, 1998, at the Daytona International Speedway in Daytona Beach, Fla. Three years later, Earnhardt was killed during a massive crash at the end of the 2001 Daytona 500 that resulted in Earnhardt’s No. 3 car crashing headon into the wall. Earnhardt, who had to be cut out of his car, was taken to the Halifax Medical Center in Daytona Beach, where he was pronounced dead of head injuries. (AP Photo)