This year has not been kind 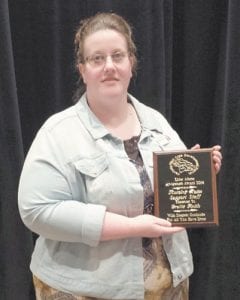 Gretta Fields is the recipient of the Elder Abuse Awareness Award for nursing home support staff from the Kentucky River Area Development District. She is an employee of Letcher Manor Nursing Home in Whitesburg.

I don’t know about everyone else, but I sure wish I could zap time into next year as this year sure hasn’t been very kind to me.

I have decided to finish out the rest of winter and spring without a furnace. I survived the month of February and surely I will be able to get through the next month or so. I don’t have the full amount of the cost of a furnace and I don’t want to go in debt.

If it hasn’t been one thing, it has been a half dozen for me. I would get ready for bed each night while it was so cold.

I think it has made me appreciate things more than I have in a long time, things that I take for granted like so many do.

I had my water to freeze a couple of times, but it thawed as soon as it got warm. At least I can go into my kitchen to fix a bite to eat, that is unless I have been too lazy to stop at the grocery store.

My computer is still down and I miss it more than I do than I do my furnace.

My daughter Angie Wiederhold has been thoughtful enough to let me use her computer.

My little sidekick Bennie Wiederhold helps me by correcting my spelling. Bennie read a name on my cell phone and wanted to know who it was.

I told Angie I would hate to have a secret written down as Bennie doesn’t miss anything at all.

My sympathy goes out to Les and Pat Wagner, along with Larry and Becky Hasty, in the death of an aunt who lived in Louisville. Les also lost a cousin about the same time.

Larry is doing well after his hip surgery. I hope to see everyone in a couple of weeks.

Hello to all of Les and Pat’s family in the mountains and scattered, wherever you are.

A special hello to John and James Ison.

Sunday was Old Time Fiddlers and we had a good crowd and good music.

Don Gross donated a fiddle to be raffled off with the money going to the club. Vicki Power and I sold quite a few tickets.

Don Gross will be taking over as president of Old Time Fiddlers, and I really am glad to see this happen. He will be an asset to the club. Don and his wife Judy are from Middletown.

Sometimes I am about ready to step down and let someone take over as newsletter editor, and now I have taken on being secretary.

I finally got to spend a little time with Polly Maucher as Polly came to Old Time Fiddlers Sunday after church.

I had called Polly but she had gone to church, so I left her a message. Meantime I had to go to McDonald’s to pick up ice, and to my surprise there was Polly at McDonald’s. So Polly joined us for a while.

I hope before too long Doyle and Betty Ison will get to come to Old Time Fiddlers.