Enes Kanter was let go by the NCAA last week. In the Land of the Free, the ex-Turkish professional wannabe-an-amateur-again can examine a full range of good options.

First, UK’s appeal to the NCAA decision that cited 33,000 reasons why it made Kanter permanently ineligible.

1. Hang around Lexington, play YMCA ball until the NBA Draft next spring.

3. Hire an agent who could move Kanter to say, California, to train and surf, profile at Laker games, and invite all media interviews to keep his name out there.

Incidentally Kanter’s NBA’s lottery draft attractiveness next spring is not compromised by the NCAA ruling, according to media herd experts.

I believe Enes Kanter has another better and far reaching option.

At UK’s appeal to the NCAA via video conference call that (thankfully) excludes John Calipari, Kanter can step up, look into a camera lens and utter some form of: “Thank you for allowing me my freedom. I want to tell you sincerely, I want to study at university in the United States. I love it at Kentucky and I ask you to reconsider the permanent ineligibility ruling and in turn I will pledge to you in writing, I will be a student-athlete in good standing at University of Kentucky for a minimum three years. And, the $33,000 dollars in question, my father will compensate the complainant for the full amount.” 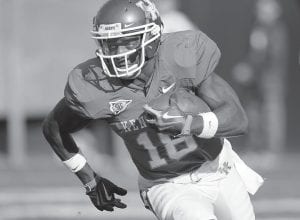 Kentucky multi-purpose player Randall Cobb looked for room as he ran the ball during the second half of their NCAA college football game against Vanderbilt in Lexington on Saturday. (AP Photo/Ed Reinke)

Bingo. Approval to let Kanter to suit up for UK, the NCAA would have its precedent dealing with foreign players who were professionals at home, but want to be amateurs in the Land of Opportunity and Second Chances.

• Kanter, the student-athlete accesses a free education, revels in UK fan love. On campus he will learn in class room and learn outside it also watching velvettongued ball coaches spin.

• Next, a demonstration by University of Kentucky of its emphasis on NCAA compliance to – progress-toward-a-degree – reaps a credibility boost.

• UK bean counters are guaranteed continued big revenue flow by marketers who know how to package a 6-11, 270-pound star decked out in blue. Think of the number Zero jersey sales over three years.

• Finally, and most important to me, fans who invest such passion, loyalty and hard earned dollars into their team(s), get a three year pay-back.

America, I love this place!

Three weeks ago University of Kentucky coach John Calipari was playing nice, stroking the NCAA process and believing Enes Kanter would get a green light because, Cal reasoned, the kid was an amateur before he was a professional in Turkey.

A knucklehead logic reminiscent of Senator John Kerry saying in 2004 he was for an $87 billion spending bill before he was against it.

Last week Calipari tried new spin, “He (Kanter) got money from no one except his dad. He got nothing from anybody except his dad,” Cal told the Lexington Herald-Leader.

Later last week Calipari was spinning again. “No one can argue that (Kanter) wanted to be an amateur.”

Of course Kanter wanted to be an amateur after three seasons with Fenerbache convinced his family he needed only a year of exposure in the U.S. until the 2011 NBA Draft. Best place to do it? At one-and-done Kentucky.

As Ronald Reagan said to Jimmy Carter, “… there you go again.”

Lemme see if I have this straight – Joker Phillips’ team had Game 11 at home on a gorgeous sunny Saturday. Bowl eligibility at stake. Sixteen seniors (plus Randall Cobb) on Senior Day. All this and 10,000-plus fans didn’t show and a halftime pep talk was necessary to fire up a home team against Vanderbilt?

What’s wrong with this picture?

UK’s 2010 football team – something’s missing. As brilliant as Randall Cobb has been, steady Michael Hartline, a lack of discipline at crucial moments in games have made what could have been an 8-3 team into a 6-5 one.

Martavious Neloms’ ejection will cost his team. An off-sides penalty on a kickoff is numbskullery; and jersey grab holding penalties reflect badly on player discipline and coaches.

Watching Tennessee destroy Ole Miss last Saturday and seeing Kentucky struggle with Vandy, good thing a bye week in Lexington. If UK-UT had been this week, the Vols would send Phillips’ team home with another Big Orange whuppin.

UK pivot man-wannabe Josh Harrellson has a crick in his neck looking to the bench for coach approval. Earth-to-Harrellson: Play the game! And find video of Brian Zoubek.

Brian who? A 7-1, 260-pound plodder who earned a role in Duke’s march to a title wears an NCAA championship ring.