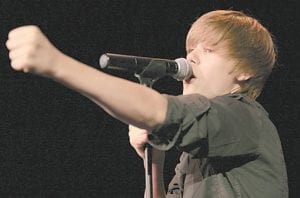 Thousands of frenzied teenagers, who spent the night camped out by Sydney Harbour awaiting a concert by pop star Justin Bieber, surged toward the venue Monday morning, sending at least eight girls to the hospital and injuring several more.

Police canceled the performance after the swarm, which may have begun when rumors spread that the 16-year-old Canadian heartthrob had arrived early. In the crush, at least 10 girls fainted, and paramedics had to pull them out of the crowd, according to Australia’s Network Seven. Of the eight sent to the hospital, one fractured her knee cap, though most had hyperventilated.

“We were expecting this to be the biggest concert we ever had, but we just couldn’t have foreseen this scale,” said Grant Denyer, the weather presenter for Network Seven’s Sunrise program, which was planning to broadcast the open-air concert.

Police said the station was well prepared, but that the frenzy of 5,000 fans got out of control.

“They wouldn’t listen to our directions, so hence they left us with no option,” Deputy Commissioner Dave Owens told reporters, adding it was a concern that so many youngsters were out at night without their parents.

“The doors were meant to open at 5, but they opened at 3 for some reason and everyone bolted,” she said, adding that one of her friends was “knocked out” in the chaos. The singer was meant to take the stage just before 8 a.m.

Jessica Whatmore said she feared she would be trampled in all the pushing and shoving.

After the cancellation, many of the girls went to Network Seven’s studios, where they caught a glimpse of Bieber through a window before he performed his hit “Baby” on the stage there.