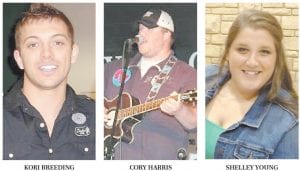 Three Letcher County residents have advanced to the final round of the “Country Music Highway Road to Fame” contest.

Kori Breeding, Cory Harris and Shelley Young will be among 10 competing for the grand prize on July 13 at the Mountain Arts Center in Prestonsburg.

“I think it’s great for this area,” said Harris. “Eastern Kentucky is so full of talent and we don’t always get to show off that talent. This is a great way for people locally to get a little recognition for what we do.”

The winner of the Road to Fame contest will receive $2,500 cash, a professional recording session, a guitar and more prizes with the total prize package totaling $7,500.

“I’ve had a wonderful experience so far,” said Young. “We’ve got some awesome talent in Letcher County. I’m excited that Cory, Kori and I can be a part of it. Hopefully one of us can bring it home.”

Breeding, Harris and Young have each won a guitar so far.

Harris, of Whitesburg, and Young, of Jenkins, moved on to the next round during the semifinal competition at the Mountain Arts Center Friday night. The top 10 from the Pikeville auditions and the top 10 from the Prestonsburg auditions competed and only five moved onto the finals.

Breeding, of Isom, was one of five chosen Saturday night in Prestonsburg during the semifi- nal competition, which consisted of the top 10 from the Paintsville auditions and top 10 from the Ashland auditions.

“It’s kind of surreal right now,” said Breeding. “Cory and I had played in bands together. That’s pretty special to me.”

Harris and Young also competed in last year’s Road to Fame contest. Harris made it to the semifinal round and Young finished fifth in the final round.

Taylyn Combs, of Isom, also made it to the final round in last year’s Road to Fame Competition.

Combs and Young each received a Gibson acoustic guitar for making it to the finale.

The grand finale will begin at 7:30 p.m. on July 13 at the Mountain Arts Center.

“I know we all appreciate the support everyone has shown and we encourage everyone to come out on July 13 at the Mountain Arts Center and cheer us all on in the finale,” said Harris.

The contest is sponsored by the State of Kentucky, the Gibson Foundation and several other private and public corporations.

The “Road to Fame” competition is searching for the next potential star to come from Kentucky’s famed Country Music Highway (U.S. Highway 23 and roads that connect with it), an area with a vast musical heritage and home to many country stars for decades. Letcher County native

Gary Stewart is one of 10 top country music legends who has a plaque in his honor along the Country Music Highway. Other stars honored include Hall, Loretta Lynn, Patty Loveless, Dwight Yoakam, Keith Whitley, Ricky Skaggs, Hylo Brown and The Judds.