Three are chosen to take action on blighted property 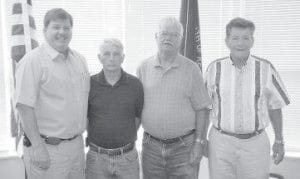 The fiscal court later approved the appointments of Delbert Anderson, a former magistrate and coroner from McRoberts; Truman Halcomb, a former employee of the Letcher County Board of Education; and Buddy Sexton, a former fire chief at the Sandlick Volunteer Fire Department.

“We wanted people that we thought would get out there and do their job and not be influenced by other people,” said Ward.

The review board was created as a part of the nuisance ordinance, which was approved by the court this spring. The ordinance was put into place to allow blighted and deteriorated property as well as junk automobiles and overgrown property to be cleared from the county.

The board will review vacant properties and will make written determinations as to the existence of nuisances and blighted or deteriorated properties that exist in the county.

People can contact the litter warden at 632-2267 and file a complaint. Then someone employed by the county will investigate and take photos that will be brought back to the board. If the board has questions, it may go look at the property.

Ward said the board will first concentrate on looking at old, dilapidated buildings.

Ward said the litter warden has already received several complaints about old buildings and county employees have taken some photos of buildings that pose a danger.

Major provisions of the ordinance include attention to blighted and abandoned homes which are referred to as sites which promote infestation by rodents and have the general effect of endangering the health and welfare of citizens and lowering the value of surrounding property. Other matters addressed by the ordinance include fire hazards, property from which utilities have been disconnected, large accumulations of trash, junked or wrecked automobiles and mobile homes, and excessive growth of weeds or grass. Some provisions were made to accommodate businesses where automobiles are being salvaged.