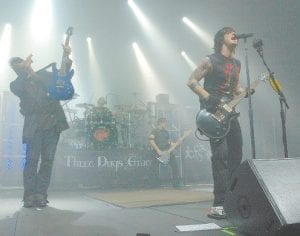 The rock band Three Days Grace, from Ontario, Canada, were bathed in light as they performed at the East Kentucky Expo Center in Pikeville on March 22. From left are guitarist Barry Stock, drummer Neil Sanderson, bassist Brad Waist, and frontman Adam Goutier. (Photo by Chris Anderson)